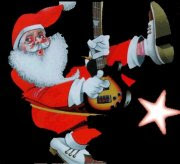 I've been slaving over this for some time trying to create a good mix of songs that celebrate the season without being (too) cliched or derivative. Basically music that you could enjoy even when you aren't wrapping presents, seeing the family or putting up mistletoe. In the end i couldn't cull much further than two cds, so feel free to just pick and mix.
It's amazing some of the trends i've picked up on too in making this mix, a lot of artists either go the hokey cover (eg. Frank Sinatra, The Cocteau Twins, Bing Crosby), indie lads giving old tunes blueish makeovers (take a bow Pedro The Lion, Bright Eyes and Death Cab For Cutie) while others just highlight the BS that surrounds our yuletide (Rufus Wainwright and Weezer).
Also if you're wondering why there's only isn't more Sufjan Stevens, then just go listen to his Christmas EP's this is a mix - not a primer.
Like the Halloween list, i've used pre-existing links so you can experience what i'm raving about, in your travels too you'll probably find other christmas goodies - think of these as the lollies at the bottom of your stocking - but i've provided a strict listing of my own accord. A big non-commital thank you to all the unwitting blogs who are providing the mp3s also.

Anyhoo so let's get down to it, oh and get in quick with the links - i can't guarantee they'll work for long.

DISC 1
FRANK SINATRA & CYNDI LAUPER - SANTA CLAUS IS COMING TO TOWN
Ol' Blue Eyes proves its not just girls that wanna have fun, a strange pairing but a pretty fun one, especially the juxtaposition between their voices.

ANDY WILLIAMS - IT'S THE MOST WONDERFUL TIME OF THE YEAR
Most of you, like me, may only be familiar with this because of the Will Ferrell skit on SNL, either way it still brings a stupid grin to my face.

BOOKER T & THE MG's - JINGLE BELLS
Perhaps the most famous Christmas song of all - and therefore very hard to find an enjoyable version of, luckily Mr. Green Onions provides the goods

THE POGUES - FAIRYTALE OF NEW YORK
Some swear that this is the greatest Christmas song of all time - i've never quite agreed but its still a beautiful track. Especially the whole sloshed vocal by Shane McGowan - bit too much eggnog mate?

BAND AID - DO THEY KNOW IT'S CHRISTMAS
It's funny that this song contains a range of artists that in retrospect have either faded into obscurity (Paul Young, Glenn Gregory) and music legends (Sting, Bowie) and who can forget Bono's yearning line?

COCTEAU TWINS - FROSTY THE SNOWMAN
A group normally known for their blissed out ambience gets all festive, sleigh bells and all

DAVID BOWIE & BING CROSBY - LITTLE DRUMMER BOY/PEACE ON EARTH
Like the Sinatra/Lauper pairing, this is one of music's most surreal moments. No on could have predicted the strange teaming of a 1930's crooner with a modern day androgynous alien over a snow-tinted windowpane for a tv special.

JOHNNY CASH - SILENT NIGHT
There's a lot of good versions out there, but this one trumped it for me because of THAT voice. Even with the mooshy backing singers Cash's voice still sounds as weathered as the hills themselves.

JONI MITCHELL - RIVER
Oh Joni, how i love your vulnerability, adding a poignant edge to the ending of another year

SNOWDEN - WHITE CHRISTMAS
A great stripped back version of Crosby's classic, and with a band name like that what else would you expect?

LOW - JUST LIKE CHRISTMAS
Time for some indie melancholy, don't fret thought the requisite sleigh bells are still in the mix

MEW - SHE CAME HOME FOR CHRISTMAS
"Don't touch her there/She's blindfolded" ummm ok, so i have no idea what the lyrics have to do with presents, turkey and good will but its still a great tune.

JOSH ROUSE - CHRISTMAS WITH JESUS
Let's not forget it's the J Man's Bday too, Josh Rouse didn't. (Note: Not Religious)

JAMES BROWN - FUNKY CHRISTMAS
Lest we forget that the Godfather of Soul passed away on Christmas Day last year, remember him this way, R.I.P.

STAR WARS SINGERS - R2-D2 WE WISH YOU A MERRY CHRISTMAS
Prepare thyself, this is truly awful - but in the so bad its good vein. Honestly just check it out.

DISC 2
JIMMY EAT WORLD - LAST CHRISTMAS
A genuinely brilliant cover of Wham!'s paean to lost love in the cold winter and a great way to start our second half.

COLDPLAY - HAVE YOURSELF A MERRY LITTLE CHRISTMAS
Mr. Martin alone at the piano for KROQ Radio, again another version with a few winners (sorry Bright Eyes) but the stripped back quality is the golden touch

RADIOHEAD - WINTER WONDERLAND
From their xmas webcast a few years back, its blatantly obvious the band are tooling about - but it doesn't stop them from providing a few minutes of beauty

DEATH CAB FOR CUTIE - CHRISTMAS (BABY PLEASE COME HOME)
DCFC give Darlene Love's original a run for its money thanks to Gibbard's yearning vocal and the slowbuild structure.

SUFJAN STEVENS - SISTER WINTER
The first song i heard from the over-abundant Christmas album, and still possibly the best, particularly the joyous shift from sombre mood to jubilant chorus of "to wish you a Happy Christmas"

SMASHING PUMPKINS - CHRISTMASTIME
I only discovered this recently and i still find it suprising that Billy Corgan, he of bald head, gothic demeanour and leather dresses, would get into the Christmas spirit.

MANIC STREET PREACHERS - CHRISTMAS GHOST
The Welsh trio come over all Slade wit their free Xmas download, after having a dig at Radiohead for their In Rainbows maneuvuer - hypocritical?

THE DARKNESS - CHRISTMAS TIME (DON'T LET THE BELLS END)
Of all the songs on this list, i think this manages to cram the most Christmas referencing lyrics into just the one song

BEN FOLDS FIVE - BIZARRE CHRISTMAS INCIDENT
A really silly and vaguely sadistic take on the holiday season, and for those paying attention - perhaps a warped precursor to 'Brick'?

MY MORNING JACKET - XMAS CURTAIN
Hopefully this rocking song will liven up the family dinner, if not try and get hold of the live version.

THE FLAMING LIPS - CHRISTMAS AT THE ZOO
The Lips have done a few Xmas songs over the years, but this, their latest is indicative of their jubilant appraisal of rock music.

RUFUS WAINWRIGHT - SPOTLIGHT ON CHRISTMAS
Wainwright embodies all the ghosts of Christmas past on this one as he has a dig at the fallacy of holiday commerce.

EVERCLEAR - HATING YOU FOR CHRISTMAS
I couldn't find a working link for this one, but its one of my faves so its going in anyway. Who doesn't enjoy a bit of Ba-Humbug at this time of the year?

WEEZER - CHRISTMAS CELEBRATION
The Scrooge theme continues as Rivers yelps about preferring Mace to Eggnog and his overweight family driving him up the wall. We can all relate.

BRIGHT EYES - BLUE CHRISTMAS
Conor Oberst, like Sufjan, did an album of Christmas standards too. This is one of the highlights

RILO KILEY - XMAS CAKE
The sombre mood continues with the first of two mini-epics. Jenny Wilson waxes poignant at another passing year... and then the choir kicks in.

OKKERVIL RIVER - LISTENING TO OTIS REDDING AT HOME DURING CHRISTMAS
This song manages to capture the mixture of melancholy and nostalgia that older people tend to feel around Kris Kringle. Touching and festive without any of the cliches.

JOHN LENNON - HAPPY XMAS (WAR IS OVER)
Leave it to a Beatle to write the greatest Christmas song ever (in my opinion). Turn it up sing along, and give peace a chance!

Have A Merry Christmas Everyone.

Feel free to add your comments about your fave xmas songs, and stay tuned for my best of 2007 list.
Posted by Al at 11:05 PM