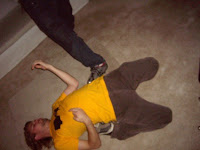 I'm going to try something a lil' different for this edition of Al's Music Rant. I'm blending two of my passions together, music and videogames, for this special post.

Now if you haven't played a Guitar Hero game yet, go out and do yourself a favour... you're back. Good. If you're still cheating maybe this will enlighten you.

Long before Guitar Hero III saw the light of day, and definitely before track details were available. I made a compilation of a friend of songs i'd like to see on there, as it turns out i predicted several bands correctly - and even three specific songs (Smashing Pumpkins Cherub Rock, Slayer's Reign In Blood and unbelievably Dragonforce's Through The Fire And The Flames). That information, along with the fact that i've played the game for an unhealthy amount of time throughout its incarnations, should be put me in good stead to provide you with...

Du Du Duh Duh:
THE TOP 10 SONGS THAT SHOULD BE IN THE GUITAR HERO SERIES

Now before we begin the list, i should note a few stipulations
1. There will be no AC/DC or Led Zeppelin - simply because the rights are next to impossible and any song by either of these bands would, of course, be absolutely AMAZING.
2. I am aware of the impending Rock Band, and beyond excited (weezer's Say It Ain't So? The entirety of Nevermind!!?) but the focus of this list is the same of the Guitar Hero games. Focus on guitar wank fantasy fulfillment
3. As much as i'd love to, i won't be including any songs for bands who have already featured in the games. That means no Metallica, no Muse, no more Iron Maiden. From here on in any bands already featured are banned from this list
4. As in previous posts, where possibly i have provided links so you can here the songs - some are videos, some are clips, while not perfect its all designed to give you a listen to what i'm actually talking about.
So without further ado:

10 - PAT METHENY - BRIGHT SIZE LIFE
Jazz has never featured in Guitar Hero games, and for good reason. They are all about the excess of specifically Rock N Roll dreams. Despite that, Pat Metheny is undisputably a Guitar Hero - and despite his jazz background he has always had the propensity for an accessible guitar approach, including fx pedals. That and this track also features the greatest bass player ever: Jaco Pastorious, which would make for some incredible co-operative mode action.
Check out a clip here

9 - THE DARKNESS - LOVE ON THE ROCKS WITH NO ICE
Considering the game's inherent humour, its surprising that The Darkness' mix of Queen and Kiss has never made an appearance. Perhaps there appearance in Sony's SingStar series means the rights are tied up. Cartoonish without skimping on riffage, talented without being tongue-in-cheek. This would be a perfect addition to any Guitar Hero setlist.
Listen here

8 - ARCTIC MONKEYS - BRIANSTORM
Franz Ferdinand, Bloc Party and The Strokes have all featured in a Guitar Hero game at some point, so why no Monkeys? Criminal!?!
What better way to induct them with this blasting number, the fake ending too would throw first-timers just as it did with Cult of Personality in Guitar Hero III.
Download here

7 - GREEN DAY - JESUS OF SUBURBIA
Roots punk has always taken up a corner of any Guitar Hero. Think of Sex Pistols and Dead Kennedys in Guitar Hero III and you'll know what i mean. Green Day would be a perfect fit in this regard and none better than their American Idiot opus, its like the best of Green Day in nine minutes.
watch it here

6 - TELEVISION - MARQUEE MOON
At 10 minutes in length, this would be a test of stamina more than tricky notes. But its rhythmic chords make for excellent note streaking opportunities and the guitar harmonies provide excellent fodder for both co-op and battle modes.
Chiming and beautiful, this would be an excellent track and a great encore song.
Download here

5 - YEAH YEAH YEAHS - PIN
Its always good to have a female vocal in a guitar hero song, if only because that dread-locked blondie appears on the mic. Featuring a blistering riff from Nick Zinner this would make a great early song. Short but very addictive.
Live @ The Wireless version here

4 - TOOL - JAMBI
I can understand why Tool have never featured in a Guitar Hero game. Their sound is more about an overall band mood and rhythmic sensibility than the guitar alone. That and Adam Jones is as far from the poster boy guitar wanker as you can imagine, that being said the Talk Box solo here is as close as we'll get. The tricky rhythm of the main riff would ensure more than a few trips to practice mode too.
Live version here

3 - JOURNEY - DON'T STOP BELIEVIN'
Ever since Kansas appeared as an encore song in Guitar Hero II, there's been hope for poodle soft rock lovers everywhere. While Journey's power ballad isn't as heavy on the soloing it still contains that uplifting mood that would ensure you get the most of your wireless guitar pulling all those cheesy rock moves.
Relive it here

2 - VAN HALEN - ERUPTION
Ok, Ok so i know i said i'd banned any bands that had already appeared in the game series, but 'You Really Got Me' was a Kinks cover. Besides this is the epitome of guitar meltdown. And even at around a minute, i could still picture swearing blind at its impossible difficulty on Expert mode.
Pleasure your ears now

1 - THE EAGLES - HOTEL CALIFORNIA
When you can't get Stairway To Heaven, what's the next best thing? This is the kind of slow-build majesty that typifies the final encore of the Guitar Hero games, just like Metallica's One and Lynrd Skynrd's Freebird. It contains a simple enough reggae like rhythm before launching into a crazy guitar duel. Lighter in the air, plastic peripheral in hand, this HAS to be in the next Guitar Hero game.


So there we have it, so feel free to write me with your thoughts, disagreements, agreements, new additions etc.
I'd love to hear them

also a bit of shameless self-promotion. I've recently started a Podcast with some friends called Gamez4Lyphe, a videogame cast with a bit of humour and casual approach to our beloved past-time, so if you enjoyed this edition of AMR you can find similar fare at: http://gamez4lyphe.blogspot.com/

it's still in its early days, but we will persevere to bring you an informed, enjoyable and interesting podcast each week