The Good, The Bad & The James Blunt

Firstly, thanks for everyone who provided feedback on the best albums of '07 list, its great to know that people are reading and *gasp* enjoying it; and if that was my serious attempt at music journalism (albeit bloated) - then this is where i let off a little steam.

2007 was a brilliant year for music, and even though industry professionals are stressing about CD sales dropping, and pop music continues to worsen, it was still a year to celebrate. Not just for albums either, great concerts, great music news, great new bands. So here's my last rant about 07 and its music in a list-a-licious format of silly awards.

BEST CD ARTWORK: MENOMENA - Friend or Foe
Matching the eclectic sounds was a stunning sleeve of zany cartoon work, reminiscent of Mad Magazine, in a colourful, creative sleeve. If only all artists took this much care in their presentation.
Check it out at here

BEST (AND WORST) CD TITLE: SOFTLIGHTES - Say No! To Being Cool, Say Yes! To Being Happy
Following the recent trend of dogmatic phrases for album titles (arguably set by Arctic Monkeys). Here is a CD title that gives a sense of attitude, in a way that demands to be said out loud. While it breaks rules of grammar(!) it's the kind of dogma fans can cling to.
Check out the artwork here

WORST (AND BEST) CD TITLE: PUSCIFER - V is for Vagina
Tool frontman Maynard James Keenan's solo project was intended to be tongue-in-cheek and relaxed, and if you didn't get the joke from the album title - you were never going to enjoy the music therein.
The joke continued with the CD artwork, which parodied an in-flight safety pamphlet (think Fight Club and you're half-way there).
Read more about it here

TRUEST TO FORM: RUFUS WAINWRIGHT
Light The Stars gets an honourable mention for the best albums of 2007, but it didn't really shake the Wainwright boat. Song about self-doubt in a grandiose arrangement? Check, aka Do I Disappoint You. Mature song having a dig at American Culture? Check, aka Going To A Town. Flamboyantly celebrating cheeky sex? Check, aka Between My Legs.
Oh, and in case you didn't know - Rufus is Gay with a capital G. In case you weren't sure he recreated his idol, Judy Garland's, headline show at Carnegie Hall song for song... in drag. Thank the heavens there's still people like Rufus in the biz.
check him out at his website

BEST DAFT PUNK ALBUM NOT BY DAFT PUNK: JUSTICE - +
OK so i'm sure that Justice are sick of the comparisons by now, French DJs who mine rock structures in order to get the feet moving without sacrificing creativity. D.A.N.C.E. was arguably the best party track (and music video) of the year, while Waters of Nazareth was the best way to try out that new sub woofer. Well at least they don't wear robot costumes...
Check out D.A.N.C.E. here

BEST SOUNDTRACK: ONCE OST - feat. Glen Hansard & Marketa Irglova
One of the best films of the year, a low-budget yet full-hearted tale of a street busker and a Czech immigrant and the power of music. It was like Damien Rice: The Musical.
The soundtrack was equally emotive, hearing these tunes you can't help but think of the corresponding scenes in the film. If you hadn't heard of The Frames before (star Glen Hansard is the lead singer-songwriter), you certainly have no excuse anymore.
Check out some marketing here

BEST EP: PORCUPINE TREE - Nil Recurring
Ok so winning an EP is really no big deal, its usually a pretty stark field, but Nil Reccuring is truly brilliant. Its basically the tracks that were left off PT's Fear of a Blank Planet, and it cleverly re-introduces some musical sections and lyrics - some even consider it better than the album proper. If the thought of a full prog-rock concept album scares you, try this taster instead - you won't be disappointed.
Check out the lead track here

BEST LIVE ACT: MUSE
No surprise considering the band took home a handful of live act awards during the year. The British trio also take the gong thanks to their hardworking approach to world touring, they visited our shores no less than three times this year, giving heroic performances (nearly) every time.
Sci-Fi lighting, fireworks, guitar histrionics, rock moves - Muse provide the ultimate arena rock show without ever being cliche
check out my review of their Rod Laver gig here

BEST, BEST OF: SOMETHING FOR KATE - The Murmur Years
In the liner notes, music journalist Craig Mathieson takes the words out of everyone's mouths when he states "I have the same complaint as you: my favourite Something for Kate song isn't to be found on these two discs."
...and yet it's impossible to fault.
Spanning from 1996-2007 it does a good job of mixing the old and the new, as well as the obscure, but the strength of the band is such that there could be a whole new selection and it'd still be one of the best catalogues any band could amass. Still officially Australia's best band, compiled at the peak of their stride.
Check them out here

BEST COMPILATION: THE KILLERS - Sawdust
The stylistic gulf between the Las Vegas quartet's debut and its chest-beating sequel, Sam's Town, was such that it irked a glut of critics and fans alike. The missing pieces, as well as some interesting new material, can all be found here.
Doing the fans some service, it includes nearly all the B-sides, soundtrack contributions and covers on one handy disc.
Getting their influences and past out in the open may mean they decide to try a new direction... yet again.
Check out my review here

BEST LIVE ALBUM: DAFT PUNK - Alive 2007
Anyone who caught the band at the Never Never Land shows knows why this album wins hand down. A flawless, perfectly calculated mix of sound and vision - this set may lop off the latter but thanks to the band's brand of mash-up style greatest hits, it remains electric.
Check out the Robot Rock here

BEST MUSIC DVD: SIGUR ROS - Heima
A DVD that finally captured the Icelandic group's life changing live show was always in demand, but one that did it in such a unique way while doubly capturing the ubiquitous beauty of their native country? Unthinkable.
Heima manages to re-invent the rockumentary while being as un-rock 'n' roll as possible.
Prepare to lose your shit here

BEST RE-ISSUE: NIRVANA - MTV Unplugged Live In New York
Highly anticipated re-release of the era-defining acoustic set. Trumping every other CD release for its historical importance more than anything else, its great to finally get a high quality (and region free) version of this concert. If you haven't heard it by now, Nirvana fan or not, you really should.
Get a preview here

HARDEST SONG TO ESCAPE: KANYE WEST - Stronger
At risk of making this list a Daft Punk love-in, its impossible not to mention 2007 without mentioning Mr. West's sampling of Harder, Better, Faster, Stronger. It was all over the radio, and all over Video Hits. It's the kind of track you can imagine seeing on future retro compilations entitled "Remember the Oughties?" or "The Number 1 hits of 07" complete with shiny artwork.
Re-live the shiny video here


And with that we bid adieu to 2007, there's plenty more i could have waffled on about - such as the tabloid fixation with Amy Winehouse and Britney Spears; albums i despised without hearing, such as James Blunt or Matchbox Twenty, i could have talked about all the indie bands that are supposedly going to save the world, i could have devoted some space to the best lyrics of the year, or a little band called Radiohead and their industry-changing In Rainbows... oh, wait...
But i think it only speaks to the strength of Music in 2007. So here's looking to 2008 to top it. Best of luck.

James Blunt - NOT the best artist in the world today 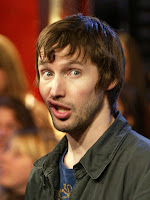