Silver Monkeys (aka The Arctic Chair) 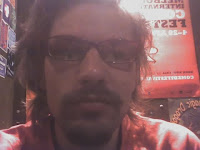 Hey everyone,
first of all thanks to those who commented in the last section, and for those of you who read it. Feel free to comment if you have read any.

OK, i saw Californian Indie act Cold War Kids at the HiFi Bar last week and wrote a review of the gig which is now up online at The Scene, (a BIG thanks to Eddie and Steve Smiles for this), here's the link, be sure to check it out as the more hits i get, the more likely i will be... gasp... PAID!

hopefullly some more of my stuff will be up there soon, but for the time being, i'm gonna splurge about all the music i've been listening to again.

ARCTIC MONKEYS - FAVOURITE WORST NIGHTMARE (2007)
If you were at all musically conscious at the start of last year, you will have heard of the Arctic Monkeys, the Sheffield, England act who stormed the news, the internet, the press - you name it. Well at the time i have to admit i was skeptical and waited for the hyperbole to die down before i invested. Final assessment: Believe the hype.

The group's first album WHATEVER PEOPLE SAY I AM, THAT'S WHAT I'M NOT (2006) was a brilliant blast of angular guitars, punchy song structures and best of all, Alex Turner's brilliant lyrics. Focusing on small-town youth's nefarious activities - pulling, punch ups, nightclubs and domestic arguments were all covered with equal acute observation and insight. Comparisons between Turner and a long heritage of great observers of British culture began, from as recent as Mike Skinner (The Streets) to Paul Weller (The Jam).

A year down the line, and the anticipation for the Monkey's second set hit fever pitch, and although the album's been out for a couple of months, i still believe it warrants investigation - not least of course because the band will be playing Festival Hall in early August.

Musically, the sound is an extension of the first album's into a slightly heavier territory, which is to say the punk aesthetic of dueling guitars and bass with pop sensibilities, but this time cranked with a harder edge. The opening track and lead single 'Brianstorm' perfectly setting the tone. Later tracks such as 'This House Is A Circus' & 'The Bad Thing' continue the trend with Matt Helder's thunderous drumming high in the mix. There are quieter moments though to break up the pace, 'Only Ones Who Know' is a lilting memento to a fading relationship and features some beautiful slide guitar from James Ford. So too the closing track '505,' a hypnotic tone matched by Turner's rhyming couplets, "I'm going back to 505/If its a 7 hour flight or a 45 minute drive/In my imagination you're waiting lying on your side/With your hands between your thighs."

Indeed Turner's lyrics are again the most obvious feature of Arctic Monkey's music, this time though he has turned his sharply tuned idea to a wider scope than just the small-town tales of their debut. With topics such as infidelity ('Bad Thing') and some 'cutting jibes at the music industry ('Teddy Picker"). There is still a great focus on characters though, whether it is the aforementioned Brian of 'Brianstorm' or 'Fluorescent Adolescent's' aging seductress.

YOUR FAVOURITE WORST NIGHTMARE then is a consolidation of the Monkeys' best traits while hopefully broadening their lyrical appeal to a wider audience and a more energetic sound. At this stage the band can do no wrong. Do yourself a favour and see what all the damn fuss is about, because if their fans get their way (this author included) they'll be around a long time.

Key Tracks: Brianstorm, Fluorescent Adolescent, If You Were There, Beware, 505


i thought i'd follow the first volume's format with an Australian act and since i'm playing catch up already...
SILVERCHAIR - YOUNG MODERN(2007)
Five years on from the delectable DIORAMA(2002) and messrs. Johns, Joannu & Gillies take a few steps back from that album's epic scope, a few steps towards synths and plant their feet squarely in the mainstream. Firstly after such a long wait and considering that the lead single 'Straight Lines' has been heard by anyone within twenty metres of a radio, i'm going to get this out of the way and say that i think this album is a disappointment, why? let's examine that closely shall we?

The opening (semi) title track, 'Young Modern Station' is a rocking way to get started, a circular riff that eventually breaks into a massive chorus designed for the anthemic singalong Silverchair have honed. Then comes the song everyone knows, with its drawn out build up, pounding rhythms and the slightly eccentric/enigmatic lyrics that are Johns staple, "washed the sickened socket and rove/resent nothing/there's good will inside of me." 'Straight Lines' is perhaps the sole reason YOUNG MODERN exists and still the best cut on the album, rivalled only by its successive track 'If You Keep Losing Sleep' a strange glam like stomp of Keyboards, marching band Snare drum and again Johns charismatic croon. The highlight comes in along after about a minute, a musical tangent where Johns stretches out "Such reduction" to a satisfactory drawl.

It is worth mentioning at this point the co-operation of Julian Hamilton (of Presets & Dissociatives fame) and Paul Mac, playing all manner of keys and synths, it wouldn't be even too far to construe that they are almost as much band members as Daniel Gillies (drums) and Chris Joannu (Bass). Their input is most wonderful, but strides even further away from what some consider the 'classic Silverchair' rock sound. The grungier, distorted guitar riffage of their debut, which even managed to steal two tracks on 2002's DIORAMA, is now all but gone, replaced by a thick swaith of beautiful harmonies, slide guitar and keyboards. No great loss one would think, except this kind of texture pervades every track and the album quickly becomes tiring, a real blast of something louder and heavier would have really helped somewhere between 'Low' and 'Insomnia.' The lame blues of 'Mind Reader' is as close as we get.

Its not all bad though, the trifekta of 'Those Thieving Birds (Part 1)/Strange Behaviour/Those Thieving Birds (Part 2)' is a beautiful track that rolls through lush orchestration, pure pop music and back again. 'Waiting All Day' too is a falsetto driven sunshine slice of a ballad, reminiscent of The Sleepy Jackson. However, once again, the main fault of the album is just doesn't quite cut enough variety away from this mould of sunny pop, everything sounds like a radio single. The final track 'All Across The World' is the worst culprit, retreading the widescreen choir of Dissociative's 'Old Man, Young Man.'

Ok so all this comes from the ranting of an old skool Silverchair fan (who believes they hit their peak with NEON BALROOM (1999)/DIORAMA (2002)), and it is clear that Silverchair are aiming for the mainstream jugular, biting hard and in that regard they are successful, albeit losing some of their edge. An above average album then, but never fear, knowing Silverchair it'll be a while before the next album, and considering Daniel John's eclectic and ever-changing tastes, the band will take some interesting steps. After all, Silverchair have never been ones to walk in straight lines.
Key Tracks: Straight Lines, If You Keep Losing Sleep, Those Thieving Birds (Part 1)/Strange Behaviour/Those Thieving Birds (Part 2), Waiting All Day

Some awesome tracks still taking up my time:-
The Rakes - We Danced Together: if you like Bloc Party, you'll love this
Malajube - Montreal, -40c: Loony Quebecian rock ahoy!
Okkervil River - Our Life Is Not A Movie Or Maybe: the first track from their forthcoming album, things sounding good
Prince - A Case Of You: a piano led soul ballad take on Joni Mitchell's classic

I think that may have been longer than the first volume, oh well, enjoy!
and don't forget: