In The Next World War... 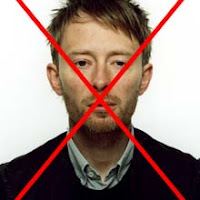 So number four, i'm all about commitment so here it is again, more of my rambling.
Just another quick plug for my online writing: namely
My rantings on Silverchair last week made it up in edited format
as has a review of Wilco's latest, Porcupine Tree's Latest... and the Cold War Kids gig review.

Ok first of all, four days ago was the 10th anniversary of the greatest album of all-time so i'm turning my attention to that for a little bit. Namely,

RADIOHEAD - OK COMPUTER (1997). Yes, its true: on the 16th of June 1997 the greatest album in the history of the universe was released by one of the world's greatest musical groups. Hyperbole? Stuff and Nonsense? Excitable Praise? i'm afraid its not, its just fact. OK Computer is just simply one of the best albums ever, shouldering space alongside the lofty ranks of The Beatles, Bob Dylan or any other musical act thats ever been labelled 'genius.'

One of my little sayings has always been "You either Love OK Computer, or you haven't heard it yet." So for those of you who have never had the pleasure, and even for those of you that have, do yourself a favour and go listen to the album again - in celebration of its ten year birthday.

I'm not going to begin to spiel about the reasons why you should give 53 minutes (and inevitably much more) of your life to this album, because once i start i won't stop. It is so many things on so many levels; an articulate timepiece of pre-millenium tension, a strange meeting of technological paranoia and transcendent mysticism, creative and powerful music that is at once catchy and memorable yet complex.... see you almost got me going there. Even if you don't take my word for it, give OK Computer a google and take a look at the countless praise its received from any number of international press, fans and casual listeners alike.

Join them, and me, in celebrating an album that will rarely, if ever, be surpassed in its originality, scope and quality.

Phew, for a minute there i lost myself... right, back to our regular programming

RUFUS WAINWRIGHT - LIGHT THE STARS (2007).
Well i've been meaning to write about this one for a while, and the reason i haven't is mainly due to the fact that i really wanted to love this album - and i intially found it a bit disappointing, and wanted some more time to hopefully change my opinion. I did grow fonder of it, and its time to give it a proper evaluation.

Wainwright's popularity (at least in the mainstream capacity) has increased exponentially in the last 5 years or so since the release of his second album POSES in 2001. His lush, theatrical music style extends from an equally flamboyant personality and although he has had many collaborators, most consistently of which his sister Martha Wainwright and singer songwriter mother Kate McGarrigle, Rufus has made sure the spotlight and stage are inexplicably his. With a bevy of musical elite friends (including Elton John) and a short flirtation with drugs, it'd be easy to assume that he prefers the glamour of fame to the drudgery of 'lower classes' - but it is in his earthy and ironic observation of the everyday that he finds his muse. It is just that it is dressed up in such fancy clothes it is sometimes hard to recognise. Openly gay and blessed with a wonderful set of pipes, his music makes sure you are thoroughly entertained as well as socially engaged.

So along comes his fith studio album, RELEASE THE STARS. After the widely praised concept pairing of WANT ONE (2003) and WANT TWO (2004), it has a quite a large shadow looming over it. The opening 'Do I Disappoint You' matches the grandeur and bombast of those albums, with the same characteristic orchestral flourishes and a grand vocal that soars above the arrangement. If it weren't for the equally lush arrangement, its successive track 'Going To A Town' would seem like a complete turn in another direction. Featuring a scathing critique of his nation's love of patriotism, "After soaking the body of Jesus Christ in blood/I'm so tired of America." Lyrically its quite a change for Wainwright, seemingly drained of his usual wry humour. The tone doesn't linger for long as the Harp-aided beauty of 'Tiergarten' kicks in, describing a rain-soaked walk across Berlin (part of where the record was recorded along with London and NYC). These shifts in tone characterise the album, and Wainwright's style as a whole; his voice and lush arrangements acting as the thread that ties the various songs together, as well as a cohesive production sheen from Neil Tennant (of Pet Shop Boys fame).

Indeed Wainwright covers some wide ground on this album, from the glam-like sex romp of 'Between My Legs' to the lilting melancholy of "Leaving For Paris No. 2." A truly strange cut too in "Tulsa" supposedly relaying a meeting between Wainwright and the Killers' frontman Brandon Flowers, "You taste of potato chips in the morning/your face has the Marlon Brando club calling." The fact this short tongue-in-cheek track (the shortest on the album) has the press salivating for details would certainly have Wainwright smiling, and speaks to the provocation he generates. His talent is not only in his musicianship, but as a wonderfully charismatic celeberity. A topic he's keenly aware of, touched on in the title track, the lyrics using the Golden Age of Hollywood as a parallel for media control in today's times "Yes of course I am speaking speaking in metaphors" he drolls, "Didn't you know that Old Hollywood is over?/ So why not just realease the gates and let them all come out/ Remember that without them there would be no Paramount."

Wainwright's constant lyrical assessments and shifts in musical style isn't faultless however, the album drags badly around its middle section, namely in "Not Ready To Love" and "Slideshow." Each represents poorer examples of Wainwright's multi-faceted stylings. The former is a quiet mix of guitar, brushed drums and hushed piano lines, and to be harsh it simply drags and wallows in a self-indulgent lyric thats meant to be heartfelt but comes off as crass "I'm not ready to love/ I'm not ready to fly."
"Slideshow" highlights bombast at its worst, the longest track on the album and at over six minutes, it overstays its welcome. The chorus in particular, "I better be prominently featured in your next slideshow" is stretched out to a ridiculous crescendo where we can hear the punchline before its been told. Worse still, its repeated, beating you over the head with chorus, razzle dazzle brass and bluesy guitar. Wainwright usually gets away with it (he does on 'Between My Legs' and 'Rules and Regulations') but here he seems to push things too far to lose interest.

The album pulls out the slack though with the impressionistic "Leaving For Paris No. 2" and the meditarrenean counterpoint of "Sanssouci" to the Germanic "Tiergarten," with the return of harp, what sounds like a bazouki and wonderful helpings of flute. The previously mentioned "Light The Stars" is a rousing, musical like close to another strong Wainwright album.
So while its not Wainwright's best album, he hasn't done anything to damage his ever increasing media image. Hopefully come his next album he'll be dominating the pop charts without holding any punches on his wit, style and musicality. And that is the best thing about Wainwright, he is uncompromising, he craves the best and here's hoping he eventually gets it.

To finish off this week i thought i'd go with a thematic collection of songs,
to follow Wainwright's geographical collection of tracks:

if you can think of anymore, please let me know