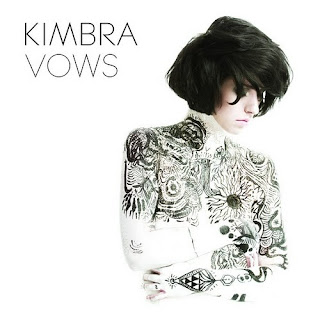 Let’s just get it out of the way, Kimbra’s debut album Vows is excellent. It not only cements her position as a fresh new voice in the industry, but justifies the hype surrounding her journey thus far. The album clearly proves that there’s far more to her talent than her already impressive singles and stunning live show. Vows is a brilliant debut, no question, so the only real discussion now, is why is it excellent?


Well, firstly, Vows sounds as polished as an album that took three-and-a-half years to make should. Kimbra self-produced the album alongside Australian urban export M-Phazes as well as the refined skills of François Tétaz. The latter’s presence drew upon his experience with sophisticated pop acts (like Bertie Blackman and Gotye), teaching Kimbra to focus on imagery to treat the album like a film. If Vows is a movie, then it's a kind of Chinatown-meets-Marry Poppins replete with a dazzling, genre-defying soundtrack. Its conceptual groove a testament to Kimbra’s firm grasp of the album format and its ability to stretch the listening experience beyond merely a collection of songs. The record really commits to a journey, a natural progression from colourful neo-pop to more reflective and internalised material, with a splash of interludes to give the album a sense of cohesion.


The tracklist is fronted with the still-brilliant hits Settle Down and Cameo Lover, remaining as the perfect introduction to Kimbra. The former a rhythmic assembly of vocal textures and jazzy flourishes in an escapist lyric about domesticity, while the latter’s chorus explodes like confetti showcasing a Motown-worthy anthem. It quickly becomes clear that the rest of Vows not only matches the musical sophistication of those heralding singles, but also reveals a maturity and depth that totally belies the romantic experiences of your average twenty-year-old, let alone one with the abilities to articulate them and communicate them as well as Kimbra does.


The shimmering Two Way Street is all starry-eyed naivety, its stuttered pianos placated by glittering keys and a gorgeous string arrangement. Meanwhile Old Flame is a suitably slow-burning palette of warm synths and unique drum sounds (inspired by Prince) that questions the nostalgia of dousing its titular heartache. In contrast, Good Intent explores both sides of a broken vow and the destruction it causes. An intense theme playfully delivered through drunk horns, jazzy bass and the nimble shuffle of drums and blues guitar. Even her moody take on the Nina Simone rarity, Plain Gold Ring, plays up to its emotional core with stripped-back, almost primal, vocal percussion and stacked harmonies. Its inclusion is also fitting considering the importance cover versions have played in Kimbra’s repertoire thus far in her career.


The record’s second half continues with a string of abundant highlights. Call Me features a characteristically meaty M-Phazes beat, its hip-hop flavoured bass and flashy horns providing a groovy bedrock for an irresistible call-and-response hooks sung with some bossy R&B flair. Limbo acts as a showcase for Ms. Johnson’s development as a producer and arranger from her days collating on an eight-track. A song about redemption indulging in a rich mix of quirky found sounds and intriguing polyrhythms. There’s a completely heartfelt torch-song in the scintillating Withdraw, and even time for a haunting duet as Kimbra’s voice coils around Sam Lawrence’s delicate vibrato in the spiritual Wandering Limbs.
Tying the genre migration together is that voice, centring the album as it slinks effortlessly from sly croon to emphatic wailing, layered through assembled textures or simply left hanging vulnerably,  warping and flexing in tone but consistently delivering the greatest character of expression: honesty.


The stylish likes of Call Me with its neon-lit funk and diva antics, or the aching emotional clarity of Withdraw would be risking stylistic failure without her sophisticated singing. The highs and lows of her composition, whether moody, reflective or pure elation, simply would not work without it.


A voice that has found many (myself too, guiltily) struggling to describe it, endlessly compared to the jazz greats like Bessie Smith or her beloved Nina Simone, as well as more contemporary examples like Jeff Buckley or Janelle Monáe. Vows won’t do any favours in shortening the list of wildly contrasting associations. The full scope of her music manages to pull in a cornucopia of eclectic influences: the vocal tics of Dirty Projectors and tUnE-yArDs, the structural expansion of Japanese producer Cornelius or Björk, as well as the fierce artistic independence and complexity of iconic mavericks the likes of Prince and Stevie Wonder.


Tossing those iconic names about shouldn’t take away from the focus here. Vows is an album rich in sound, theme and execution, it disappoints only if you’d written off Kimbra as a mere pop star. At a time when it seems that female performers are regularly relegated to being sex symbol jukeboxes or behaving like fey, neutered school-children, Kimbra shatters those female poppet boundaries. In one fell swoop she’s graduated from bankable songstress to artist, one with a rewarding career ahead of her.


Oh and just a bit of a cliffhange, I've got some more exciting Kimbra news, namely another interview about all things Vows. Watch this space.
Posted by Al at 5:53 PM