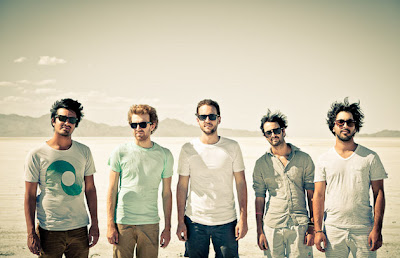 Unfortunately, for the front half of the set his vocals struggle to rise through a muddy mix, all those airy guitars and hissing drums getting stewed together into a sonic soup. It doesn’t help that Young The Giant’s tunes lack a little definition to begin with. Though the likes of Apartment, Guns Out and the anthemic Cough Syrup offer a serviceable jangle in typical verse/chorus structure they lack the sharp hooks to really catch the ear. Their style is still a mish-mash of ideas and dubious recreations of their influences (Kings of Leon's version of rugged meets Coldplays earnestness if we’re being deductive). Early track Shake My Hand (from back when they were named The Jakes) is a perfect example, though it features yet another likeable groove that finally has some of the audience swaying along, it’s almost-chorus isn’t very memorable and less so it’s piecemeal verses.
The lighter touch of Strings and Your Side – essentially an ever swelling crescendo in structure – keeps things from falling into a mid-tempo slump, as does Gadhia’s energy – making up for his bandmates’ near inertness with dramatised hand gestures and, when he’s really geared up, smashing the cymbals with his tambourine.
They smartly close with their fist-pumping single My Body. It’s chugging two chord chorus is a no-brainer but one even The Killers would be jealous of. It’s their least esoteric song but ironically, their most enjoyable by a mile. Once they develop their stylish ideas alongside a head for structure, they could do interesting things, but for now their strengths lie in a few good singles and a great vocalist. Young The Giant is a fairly apt name for a band still naive in their growth.
Grouplove on the other hand, it has to be said, are nothing if not energetic. 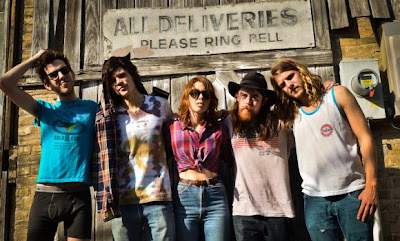 No sooner have they taken the stage than they’re off with Don't Say Oh Well, bounding and rattling in chaotic unison. For starters they have a  winningly ragged duo of front-peoples in Christian Zucconi, looking like the black-mopped love-child of Beck and Ryan Adams, and Hannah Hooper – glamming it up in a sequined white cotton top. Whether trading lines, harmonies or whooping melodies , they quickly conduct the audience into the loose-limbed party atmosphere their music complements so well. Lovely Cup quickly follows with more of the same, while better highlighting the vocal contrast between Zucconi’s rough and ready yelp and Hooper’s rounded accent and tone.
With but one EP to their name, they already know how to deliver soaring rock and roll built on reliable melodies, steady rhythmic builds and a cathartic energy reminiscent of the nineties rock grace period – namely power chords, quiet/loud dynamics and drummer Ryan Rabin’s Grohl-esque pounding.
Even when they slow it down for the murky riff of Gold Coast, it still achieves some stunning climaxes. They’re not so concerned with looking cool, which isn’t to say that they don’t, but you can see the passion – and fun – they’re having in their performance, all five unafraid of sounding a little raw in their enthusiasm. Their energy is infectious, the bouncing patches in the crowd mimic those of Hooper and bassist Sean Gadd. Both spending the first half of the gig as if on a stage of hot coals, pogoing along to their own rumbling concoctions; with guitarist Andrew Wessen and Zucconi’s moshing manes not far behind.
Naked Kids, a splendid ode to life at its beach-combing laziest, is an early highlight. Beginning with perfect two-part harmonies before sidling into its coasting beat and crowd-rousing handclaps to rounds of ‘oh yeeaaah!’ It’s their newer tunes however, taken from forthcoming debut Never Trust A Happy Song, that really show how the group have harnessed their woolly vigour as well as their pop instincts.
Itchin’ On A Photograph is the first killer of the night, a real highlight possessed of that blistering reckless energy that’s intangibly nineties – think grunge as invented by surfers. It just builds and builds until it collapses in a heap.  Elsewhere, Betty Is A Bombshell is as close as they get to a tender song. There’s still crashing punctuation, but in its looping guitar plucking and shimmering keys it comes over as a ballad. It’s heart-on-sleeve ache, has a bit of Jimmy Eat World about it.
Meanwhile latest single Tongue Tied has got the electro pop vibe cornered, musically – as well as lyrically – it’s a party. For those missing the merry buzz of Passion Pit or have recently just fixed onto Foster The People, here is the latest addition to your playlist (in fact
Grouplove and the latter have just traded remixes).
Before enthusiastically thanking the crowd for the umpteenth time, they return for an inevitable encore of Colours. The track that broke them sounds as big live as it does on record, all its boisterous angles and liberating explosions are played to the hilt. Perfectly lending license to a big rock finish. Only their second show into their first-ever Australian tour, and Grouplove are already cementing a solid reputation as an exuberant, joyful bunch; but most importantly – they’re lots of fun.