This is non-stop baby 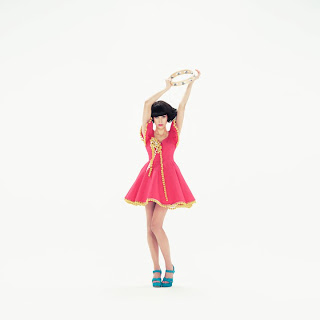 Kimbra. Remember that name.
It's both a question and a demand.
Perhaps you recognise the name from previous posts (such as our first full interview) or any one of her amazing live shows. You might know her minor hit Settle Down, which scored a spot just outside triple j's Hottest 100 at the start of the year. Also winning the coveted 'Best Use of A Tampon' award in this blog's very own Good, Bad & James Blunt Awards 2010. Or perhaps her lending her vocal talents to Miami Horror's I Look To You.
However, if it's drawing a blank, not a name you find synonymous with neo-soul pop of the highest order or one you're paricularly familiar with. It soon will be.
That was a bit Yoda wasn't it? Look, the point is, Kimbra's got a new single out and you should really check it out before she postively explodes on the music scene. It's called Cameo Lover and it's available as a handy little EP right now on iTunes. There's also a brilliant accompanying video - which you probably saw last A/V Room post.
But it's so good that I'm just going to post it again:
Yeah, that just happened.
And to tie it all off with an appropriately pretty, colourful bow Ms. K also had a headline show at The Corner to launch her newest song. Which you may have also already read over at Beat magazine.
But since I'm rather proud of it and it's my blog, I'm going to paste it in full now.
Yeah, this is happening:
Northeast Party House and Yeo did a great job of warming up the dancefloor, in particular the latter’s ability to transform the one-man DIY Prince act of his solo recordings to a full band, complete with scintillating keytar skills. But nothing could quite prepare for the finely honed soul-come-funk-pop assault of Kimbra and her whip-tight band.
From the moment she launches onstage, bedecked in frilly black cocktail and forearms decorated in the same black faux-tattoos of her artwork, it’s clear she’s on form. Let alone that voice, warping and flexing in tone, pushing and pulling in dynamics and of course belting the expression out of every syllable. It’s a wonder how such a powerful force is emitting from such a slight frame. But while Ms. Johnson has always been in impressive command of her voice, she’s grown in equal confidence when it comes to command of the stage. Her presence is electric, whether swooping into another tambourine frenzy or making her loop pedal acrobatics look like child’s play, it’s impossible to ignore her brilliant band but they are truly heard and not seen, such is her visual magnetism.
Traces of the innocent, charming twenty year old can be seen in flashes of stage banter, and her genuine exuberance for tonight’s sell-out audience, but for the remainder of the show that mawkish naivety is nowhere to be seen. Replaced by a performer who was born for the stage.
Good Intent and Limbo are attacked with all the fervour and gusto you’d expect of such a well-trained live unit, but the true marker of their confidence, and Kimbra’s, is in frontloading her most well-known track Settle Down. Rather than save it for a chorus-baiting encore, or to round out the backend of the set, here it is front and centre. As glorious a piece as ever, but not one for which she feels the need to gravitate her setlist around anymore.
The highlights are plentiful: from the sassy take on Nina Simone’s Plain Gold Ring to Break’s irresistible titular hip-hop groove, and the shimmering Two Way Street remains a thing of undiminished beauty. Meanwhile, Marigold positively pummels with its rhythmic exuberance and then exploding into a pitch-perfect recreation of the theme to Captain EO, better known as Michael Jackson’s Another Part Of Me. Cameo Lover, the single for which tonight is for, rounds out proceedings with its punchy mix of brassy energy, Motown singalong and in its coda, a vocal loop whose doo-wop heritage harkens back to The Chordettes’ Mr. Sandman.
At a time when it seems the only alternatives for female performers who don’t want to be chart starlets means being hemmed into acting like airy girls who sing like children (with optional acoustic guitar); Kimbra smashes those boundaries. Even, or perhaps especially, when she’s tackling other people’s material. The encore opens with a cover of fellow ex-pats 1QA’s Somebody Please (footage here), before offering a brand new tune about selflessness appropriately called The Samaritan. It's a strong finish but when it seems curtains, there’s still room for a very cheeky end to the night with a few rounds of Daft Punk’s Robot Rock. You don’t get that with Jessica Mauboy!
Speaking of de-butts (sorry…), Kimbra’s can’t come soon enough, and if it’s anything like tonight, it will be a fun mix of the pure joy of performing great songs with an effortless showcase of talent. We all know Kimbra is good, but sometimes performances like this reminds just how good she can be. She has absolutely, certifiably killed it. The Corner and its heaving swamp of appreciative fans, awestruck newcomers and the weary bones of the danced will agree: they’ve just been slain.
I've threatened it before and I'll threaten again, as soon as Vows drops, I'm gonna be all over it. In fact this whole post is bound to get referenced and linked to in future as proof. Post-modern, if you'll excuse the pun. You will? Great, ready for some more pun-ishment? My love for Kimbra's music is non-stop baby, and it ain't no cameo, it's a full-blown affair.
And for my final trick, perhaps my fave Kimbra track, performed live at Melbourne's own Sing Sing studios: