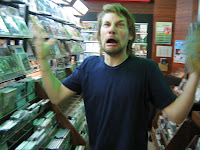 OK Buckle Up People, no reviews this week, no need really because this has been the most exciting 48 hours in music news in a loooooooooong time.

Firstly go visit www.inrainbows.com... you're back, ok, holy shit.
Let's stop and take this in, Radiohead are releasing their 7th album, reason enough to slow the Earth's rotation - that and they've managed to secret its release date away from people long enough to ensure that its now only available next week! (Oct. 10). That and for the download version YOU CAN CHARGE WHAT YOU WANT!
As far as i know this is totally unprecedented, Radiohead are out of contract and are taking distribution into their own hands without any involvement from Record Companies. A massive wow in my book.
Still the best musical act in the world.
Head on over to goodweatherforairstrikes.com (a great music blog) to get a
solo piano taste of album track "Videotape."

Right so what else is such a big deal, well the first official BDO lineup was announced today. While headliners Rage Against The Machine may not come as a surprise to those following the music press the following two acts might. Bjork and The Arcade Fire. YES! *pumps fist in air*
Bjork hasn't graced our shores in ten years and her live shows are apparantley a life-changing experience, now i admit that the BDO may not seem the right venue for her style - but i frankly don't care, i'll be buying my tix and hanging near the front row all the same.
As for Arcade Fire, now you may call me a hypocrite since i gave Neon Bible a bit of a lashing, but let's be honest production on record and a live performance are two VERY different things. I'll be just as content to yell my lungs out to Black Mirror as i will Rebellion.
So all in all. I Can't Wait!!!

OK, now to go off on an Icelandic tangent...
I recently received my copy of Hlemmur in the mail, what is it you ask?
It's a limited edition hardback book (1 of 3000) that contains a DVD of an Icelandic doco entitled Hlemmur that the excellent Sigur Ros did the soundtrack for - which is also included on CD.
Its really for the hardcore Sigur Ros fans (is there any other kind?) but i highly reccomend it, for more details check it out

Having since watched the film and listened to the soundtrack its only whet my appetite for their upcoming releases, namely Heima and Hvarf/Heim. Heima is a very special performance/documentary DVD following the band performing free concerts around their native homeland against some stunning backdrops (think vacant oil refineries and rolling jagged hillsides).
Hvarf/Heim on the other hand is a double album, the first disc is studio recordings of some previously unrecorded songs and live favourites (including Hafsol - the one where the bass player strums with a drum stick). The second disc is newly recorded acoustic versions of older songs.

All this excellent news basically just serves to reinforce what an amazing year for music 2007 has been, and how much harder my inevitable end of year best of list is going to be to compile.

Songs Conquering My Eardrums:
Glen Hansard & Marketa Irglova - Falling Slowly: I had the pleasure of seeing Once yesterday, just do yourself a favour and see it - particularly for the performance of this number
Soko - I'll Kill Her: Crazy French chanteuse wrestles some musical space alongside Camille with this revenge pop murder ballad
Magnet - The Gospel Song: Magnet (aka Evan Johanssen) releases third album opening with a soft-rock reinvention of Bloc Party's The Prayer
Dream Theater - Octavarium: The prog rock fascination continues with this 24 minute opus from DT's eighth album of the same name.