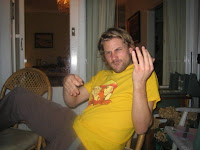 Welcome Back,
for those of you still watching...

Thought i'd change up the format a little this week, and try and make it a bit shorter to see if i get anyone finishing the article. Speaking of which, be sure to still check out my articles on The Scene a great online and alternative press magazine.

My rantings on Silverchair last week made it up in edited format as has a review of Wilco's latest: and the Cold War Kids gig review.

sweet! I feel like a music writer. Enough ego stroking, on with the show

EDITORS - AN END HAS A START, was to be the lead off single for the band's second album of the same name. That honour has since gone to opening track 'Smokers Outside The Hospital Doors', but if this track is any indication of the album as a whole then we're all in for a treat.

For the uninitiated Editors are a Birmingham based indie rock group who have drawn comparisons to early U2, the angular histrionics of Bloc Party, and thanks to lead singer Tom Smith's vocals: Interpol. Their first album, 2005's THE BACK ROOM, was a wonderfully moody, if very patchy debut. Regardless, the band had some fine singles - namely 'Blood', 'Munich' & 'All Sparks.' The rest of the album seemed merely like a collection of songs, as opposed to that lofty principle of an 'Album' with a capital 'A.' The dark aesthetics though, represented musically by choppy guitar and bass, searing guitar melodies and circular, pounding rhythms, was the most fully formed characteristic; one the band hope to push to a more cohesive set for their second effort.

'An End Has A Start' begins with a simple 4/4 on the bass drum accompanied by a waif-like mellotron before jumping into the song proper "I don't think its going to rain again today" prophesises Smith as the band propel through the verse with the aid of the aforementioned thumping toms and a high guitar line scraping above the vocals. Then comes the chorus, "you came on your own/that's how you'll leave/with hope in your hands/and air to breathe" at this stage, it is only given the one runthrough before heading back to the verse, but it is this anthemic quality that is the most memorable, the widescreen production reminiscent of Coldplay's X&Y (2005). About 3/4 through the (4 minute ish) track, we have the requisite breakdown before launching headlong into the outro, which is - you guessed it - a repeat of the chorus. If all this sounds formulaic, its because simply analysing the track doesn't do justice to the experience (remember dancing about architecture?)

It's the kind of track that, the first time you listen you'll already singing along by the end. Although not life-changing, or particularly inspired, its a fun, broad song that is a good indication of the forthcoming album's quality - both epic and aesthetic. If you like any of the bands mentioned or you just like your indie rock big and sing-a-long, be sure to check it out.

COG - THE SPINE. I had the pleasure of seeing the Bondi based Cog, at the Hi-Fi Bar last Saturday, and along with Karnivool & The Butterfly Effect, they are one of the leading lights of Australia's alternative hard rock scene. Much of their well-earned follwing has been carved thanks to an incredible live show.

Cog consists of brothers Flynn & Luke Gower (guitars and bass respectively) with the virtuosic (and awesomely named) Lucius Borich on drums. All three contribute vocals, while Flynn takes lead. Performing in the flesh, they are much more than the sum of their parts, listening to them play on record you would be forgiven for easily mistaking them for a much larger band. This speaks however to their excellent arrangements, and foward-thinking use of sampling, sequencing and most importantly - rocking hard. Their style has been compared to prog, metal, ambient and they cite influences as diverse as Tool and Nina Simone. Yet their sound is a compelling blend of all these.

So why 'The Spine' when the rest of Cog's 2005 debut (THE NEW NORMAL produced by Tool alumni Sylvia Massey) is just as good? Because i think it best exemplifies Cog's ubiquity, and because performed live it is single-handedly one of the greatest build-up songs ever. The song begins with a drone, and a spoken word introduction (that prefaces the band's website), and worth quoting in full:

"And it was the new music and it was timid and humble and stern.
It was brown and light brown and sepia.
It was almost forgotten, it lays in a ditch on the side of the road you and I drove along once and it was happy to lie there day dreaming.
It stretched into the distance further than you ever thought possible and it didn't give a fuck about you and I either way."

At this point Boren's heavily echoed drums rattle and give way to a potent groove from Luke Gower's bass and Flynn's characteristic vocals "we're into all of those/we're into overload." This ambient like section repeats until, some faint shouting in the background give away to a new section of tribal drums, echoing guitar and that same drilling bass. It is worth mentioning at this point, the complex structure of Cog's music. Verse/Bridge/Chorus simply does not exist here, instead 'The Spine' snakes onward and upward to an unbelievably energetic climax before 'warming down' to the 7:10 finish. With that in mind, let's continue our journey.

Along with ring of distorted guitar are the memorable lyrical couplets, with a political tinge "Jackpot lottery, got bonanza/Sayonara Propaganda." Indeed politics play an important part in Cog's makeup also. Titles such as 'Anarchy OK' begin to hint at a deeper political standing, and while the majority of their lyrics are more impressionistic than taking an overt stance, their actions speak louder than their words. Such as touring in support of a controversial doco concerning detention centres with a shot of Boren's drumkit covered in the unsubtle scrawl of FUCK BUSH BLAIR HOWARD. Instead of outright anger, their music suggests solutions to these issues.

'The Spine' reflects this mindset, while the music boils and coils with background yelps and the loud music, the main repeated line is "Insurrection of the freeway/turn around and go the wrong way" As Flynn's vocals get more intense and emotional this sense of transgression offers power, and power is indeed the final destination of this number. At around The 4 1/2 minute mark the song returns to the cyclical opening, this time building intensity with call and response vocals and a rising marching snare drum. Before we hit the climax, as bass and guitar play a perfectly synchronous riff as what sounds like a kettle boiling takes off in the background. This is the point at which on Saturday Night, everyone in the Hi Fi Bar began to explode.

'The Spine' and Cog in general, will not be for everyone, but anyone vaguely interested in creative, intelligent and progressive rock music should investigate further. The kind of pioneering the likes of which Radiohead, Muse and Tool are credited with and the ranks of whom Cog should join. I highly recommend this track and of course, their album.

Ok, so i failed on the shorter word count thing, my bad. Please feel free to add your comments - i'd really enjoy it

and to keep with the mixing up, some awesome Albums i'm enjoying
Wilco - Sky Blue Sky: the band's sixth effort is another milestone, check out my review up top!
Camille - Le Fil: French singer with as much creative spark as the best of the West
Karnivool - Themata: I'm seeing them this Thursday, melodic, creative and powerful
Rufus Wainwright - Release The Stars: bombastic and egotistical, just what we like best from Mr. Wainwright

Peace, Love and Understanding... or else
Al
Posted by Al at 9:40 PM