Big Ideas (Don't Get Any) 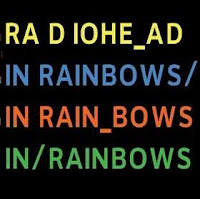 ....ok i'm publishing this one at an early hour because i've just finished listening to Radiohead's new album, IN RAINBOWS, for about the seventh time. Needless to say, its amazing, i mean come on, the Oxford five piece are the greatest musical group walking the planet. But i soldiered on and tried to write a review anyway, i've submitted this one to The Scene so expect it to appear soon, but i thought i'd double up just this once, consider this version the "Director's Cut" (eg. longer, more indulgent). Ok strap yourselves in.

RADIOHEAD - IN RAINBOWS (available at inrainbows.com, 2007)
The task of judging any new Radiohead release is a tricky and complex affair. Some things are inherent: it won’t be for everyone and comparisons to their contemporaries will be slim, but all factors are exacerbated with the digital hype of In Rainbows.

By handling the album’s release themselves as a download, and in an unprecedented move also allowing the consumer to set the price, the album’s imminent unveiling has caused a stir within the industry; opening debate on topics such as the future of record labels and even the value of music itself. (for more info check out I'm Guess I'm Floating)

Emerging from the media furore are ten songs, the majority of which will be familiar to fans, having been kicking around on various bootlegs for over a year. Indeed album highlight “Nude” (previously known as the title of this very music rant) dates back to 1998, but all previous formations were merely groundwork for the finished, very polished, product. The band have certainly taken their time, its been four years since HAIL TO THE THIEF, and anticipation for new music ever since, has been, as always - fevered.

First track “15 Step” takes its time to hit its stride but once it does, it’s as exciting an opener as “Airbag” or “2+2=5.” Second track “Bodysnatchers” keeps things rolling along with some crunchy guitar work, and one of the few rockers to be found here. "Jigsaw Falling Into Place" comes close, but there's nothing as violent as "Myxamotosis" or "Electioneering." It would seem all the glitch techno/electronic leanings have been expunged through Thom Yorke’s solo project of last year as things have softened in the world of Radiohead. Once again Nigel Godrich provides a rich veneer in his production work as the album’s tone is best described as lush, warm and spacious.

It’s fascinating to think the same group who produced such edgy, polarising work (insert Kid A cliché here) is capable of such calming arrangements such as those found here. “All I Need” is truly sumptuous, while “Weird Fishes/Arpeggi” is as aquatic and dreamy sounding as its title would suggest. "Faust Arp" could be described as a guitar ditty, reminiscent of Nick Drake even, while "Reckoner" and the aforementioned "Nude" take the balladeering of HTTT's "Sail To The Moon" as a blueprint and build wholly new and starry configurations. "House Of Cards" interestingly contrasts a bluesy acoustic with Jonny Greenwood's fuzzed out histrionics. All the while, Thom Yorke’s crystalline falsetto providing cohesion across the album.

Lyrically, Yorke pursues his curious, cryptic vein with flashes of political intent (like those of THE ERASER) but nothing too much has changed with the band's wordplay. "All I Need" is an undisputed highlight as Yorke honestly compares himself to animals trapped in hot cars and second acts waiting in the wings. He again manages to balance strange, visually dominant imagery with any musical style his peers can conjure up musically.

Guitars are more prominent this time too, be warned that this isn't The Bends 2 that some have been fawning for, but usually of the jazzy/laidback variety in combination with piano, lilting harmonies and soaring strings. Ed O'Brien provides excellent counterpoint, while Jonny Greenwood's moonlighting as a composer have obviously fuelled some of the stringwork here, all with a focus to that overall soothing tone. The ever brilliant rhythm section of Phil Selway and Colin Greenwood, thankfully keep things from getting too airy.

Every cut builds in layers that blossom and reward with repeated listens and while its still a stretch to label it ‘radio-friendly,’ the band have truly reigned in any indulgence, keeping most tracks to a lean running time, and the total only just nudging past 40 minutes.

On its own merits, without the artwork or even a planned second disc, IN RAINBOWS could be simply part of a bigger picture. Is this one half of a double album missing its twin? Or perhaps the second CD will be merely B sides. It’s hard to tell, but what is here is another creatively compelling and strikingly beautiful work from a band who always redefines what a classic album is and should be.

...So yes, its a Five Stars, Two Thumbs Up, a full ten, whatever you want to call it. In a way though, to use a cliche, it has kind of thrown up as many questions as it has answered. How will it affect sales of the physical CD for instance? Regardless, its concerns like this that keep Radiohead such a dynamo in the oft-stagnant music industry. Album of the Year? Maybe, i'll reserve full judgement 'till the second half.

My usual formatted list of suggested songs has been sullied since there's been naught passing my ears except In Rainbows. So instead,
PLEASE WRITE ME YOUR COMMENTS ON THE NEW ALBUM, I'D LOVE TO HEAR (AND MAYBE) COMPILE THEM.