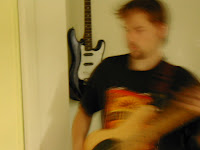 since all these new music applications have popped up (and since some of them aren't working for me at the mo') - i thought i take this opportunity to start a new "What I'm Listening To" kind of thing. I'll try to write these fairly regularly, but we'll play it by ear... pun intended.

Aside from the self-indulgent satisfaction this affords, and hey if you've got a facebook account you've got a bigger than average ego anyway, hopefully it points other music lovers in new directions.

I for one love new music, either by a band i know and love dearly or something that has eluded me for many years, or the brand-spanking new. I'll try to touch on all of these in each entry.

A man once said that writing about music is like "dancing about architecture," basically that its a hopeless attempt to articulate something that was meant to be listened to, but bugger it, i'm gonna try anyway. At least i'm self-conscious about it. po-mo.
Alrighty,
here we go

The same year that Guns N Roses unleashed their debut album, Def Leppard were storming the charts with what is now funnily known as 'Bubblegum Metal' - why? because it combines pop's ridiculous production and catchy hooks with Metal's OTT pouting, melancholia and face-melting guitars. I always dismissed this album as an interesting piece of pop history cross-over, boy was i wrong... and strangely right.

The album was supposed to capitalise on the mainsteram success of PYROMANIA (1983) a car crash involving drummer Rick Allen put the album into heavy delays and nearly broke the band up. If you should listen to this album for only one good reason, its Rick Allen's drumming... with ONE ARM!

Produced by Robert "Mutt" Lange (producer of AC/DC and present wife of Shania Twain) and filled with excellent party tunes, HYSTERIA is for anyone who's ever enjoyed yelling Summer of '69, Don't Stop Believin' or Electric Blue at a house party. For anyone who's ever 'air drummed' to a song.

The euphoric feeling you can get from squealing "I don't wanna touch you too much baby/cause making love to you might drive me crazy," is the exact kind of 80s guilty pleasure that the current generation revels in. If you have any interest in 80s pop music, or feel-good rock, this will satisfy both your urges.

ART OF FIGHTING - RUNAWAYS (2007)
Jumping a couple of decades ahead we have one of Melbourne's best bands, Art of Fighting. Who ironically, sound nothing like their name.They have built a steady fellowship around their lilting, slowburn music thanks to a steady stream of live shows and radio support (from the likes of Triple J and Syn Fm).

This, their third album, follows in a similar vein to their previous work; namely medium to slow paced tempos with long drawn build-ups, aching falsetto and chiming guitars. As the title suggests, the lyrical themes follow travelling, and the moments of separation, but also transcendence, that it can offer. For anyone who's been in a long distance relationship or felt a sense of wanderlust - these already poignant tunes will surely hit home.

'Distance as Virtue' is as close as the group have come to a perfect blend of pop and their usual soaring sensibilities with a catchy (and cryptic) chorus. 'Misty as the Morning' an epic building track, that at its 6 minute length could be the album's centrepiece, and the whole set closes powerfully with 'Night on Night.'

If you're keen on quality Australian music, or specifically what Melbourne has to offer. Art of Fighting are a perfect, and perhaps gentler, accompaniment to the likes of Something For Kate and Augie March.

check out some of their stuff at the band's website. http://www.artoffighting.com/songspage.htm

Also be sure to check out these tracks if you can,
Interpol - The Heinrich Maneuveur: the new single from NYC's finest
Hot 8 Brass Band - Sexual Healing: thanks to Manda for getting me a copy, just get it
My Chemical Romance - Cancer: its not emo... i think... i'm just addicted to this track
Nina Simone - Sinnerman: plays over the closing credits for David Lynch's latest Inland Empire.
I think i've drowned you all in words for now. But i'll endeavour to get another one up soon.