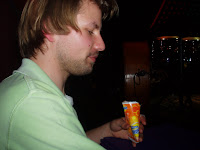 Hi Music Readers, Listeners, Lovers.
First of all, i'm sullenly nerve-wracked as tonight is the opening of the new show i'm involved in - Porky Pies. I'm sure i've beaten you all over the head with plugs already.... so you won't mind if i do one more, teehee.
PORKY PIES - BOOK NOW!

Now i'm a man of my word and i promised last week a double up of catch-up reviews from the 07 edish. Well here they are, firstly the Foo Fighters review which has made its way up onto The Scene, just follow the link. And now for Rilo Kiley (which may appear on The Scene, so consider this a sneak peek!):

RILO KILEY - UNDER THE BLACKLIGHT (Warner, 2007)
Indie quartet Rilo Kiley always seemed to operate on the fringes of the mainstream, that was until the success of 2004 single “Portion For Foxes” as a radio anthem for the under-sexed. Building on the success of its parent album, MORE ADVENTUROUS, band member Jenny Lewis released a solo album, 2006’s RABBIT FUR COAT, which satisfied her country rock yearnings and further piked curiosity for her band. So a year on and we have the group’s major-label debut, and their first serious venture into the indie big leagues.

Where Rilo Kiley’s earlier albums struck a balance between co-writers Lewis and Blake Sennett’s contributions, the spotlight here is very much on the former with Sennett sidelined to a single lead vocal (on “Dreamworld” a woozy cut worthy of its title). Conscious or otherwise, Under The Blacklight acts in part as a spiritual successor to Lewis’ solo debut, in part grafting that album’s country and folk twang to a full band setting. Opener “Silver Lining” and the brass-driven “15” contain the same harmonies and heartbreak lyrics that were RABBIT FUR COAT’s hallmark. Along with this sun kissed sound is a blend of new-wave pop, which combined with Lewis’ vocals, is obviously reminiscent of Parallel Lines-era Blondie.

Combined with that new-wave lean is a lyrical focus, as the album title may suggest, on the seedier side of hometown L.A.’s hedonism and eventual heartbreak. As “Close Call” pines “Funny thing about money for sex/You might get rich but you’ll die by it” and Lewis’ tone is positively teasing on the slinky funk of “Moneymaker.” The group have a wonderful way with a chorus too as the Spanish-tinged disco of “Dejalo” or the sunshine sing-along of “Breakin’ Up” attest.

Under The Blacklight is very much an appeal to the mainstream with pop hooks aplenty and the focus on Jenny Lewis as frontwoman. No bad thing considering Lewis’ sex appeal relying on confidence and musical talent as opposed to visual flaunting, but it may irk Rilo Kiley devotees who may consider Sennett, along with Pierre de Reeder and Jason Boesol, as subservient in the process; but their gripes may perhaps be the band’s gain. Lewis, and this album in particular, acting as the bait to a rewarding back catalogue as well as a bright future secured through major label-backing.

Cool, so i think i'm nearly back on schedule a la reviews, but i'm still planning one on The Knives of Neptune and Joni Mitchell's newest album (on the Starbucks record label!?)

Here's what's been enjoying stereo space this week:
Genesis - A Man For The Times: Pre-Invisible Touch anthem with massive keyboards and Phil Collins drumming
Modeselektor - White Flash (feat. Thom Yorke): That Radiohead album still seems a long way off, this has sated me temporarily.
Foo Fighters - Come Alive: definite highlight from the Foos' sixth album
Justice - Genesis: Dedicated to all of those who made parklife (not I)