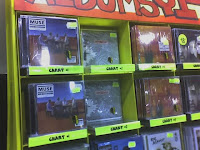 So my plan for controversy backfired, because it seems you're all too clever to kick up a fuss until the full list is revealed, so times awasting, lets get into it.

6. THE MARS VOLTA - AMPUTECHTURE
One of the hardest working bands in the business, this is The Mars Volta's fourth album in three years. Their ambitions swelling with each release, AMPUTECHTURE is no exception, containing all the hallmarks of the bands utterly unique style. Omar Rodriguez-Lopez' guitar work is anything but hummable and vocalist Cedric Bixler-Zavala's lyrics remain the work of a crazed Poet Laureate. As the twin heads of a musical beast that is challenging, longwinded and eccentric - if you haven't heard Mars Volta before, or if you have and didn't like it - this album will do nothing to change your opinion. And yet it is for all these reasons that i love this band, and why i believe they are a vital force in modern music.
Carving away a lot of the ambient interludes that marked its predecessor 2005's FRANCES THE MUTE, this album instead focuses on a constant lew of riffing and erratic changes, as shown by the likes of "Viscera Eyes" and "Day of the Baphomets." The album is well-paced too, bookended by the atmospheric "Vicarious Atonement" and "El Ciervo Vulnerado (The Wounded Deer)", any of the middle six tracks contain more ideas in one performance than some bands manage in a whole career, not least of which the 18 minute epic "Tetragrammaton." AMPUTECHTURE is the paramount in 'thrilling' as an alternative to the mainstream, but please approach with caution.
Key Tracks: Tetragrammaton, Viscera Eyes, Asilos Magdalena, Day Of The Baphomets

5. TOOL - 10,000 DAYS
The heavier section extends with the appearance of the forefathers of 'clever metal', the almighty Tool. Never ones to rush, 10,000 DAYS appears five years after their last musical outing, but it is well worth the wait. Proceedings kick off with the faux single, "Vicarious", a brutal analysis of culture's obsession with media-saturated violence as a means of release and identification. Vocalist/Lyricist Maynard James Keenan's dark themes aren't the only thing that's heavy about the band. Guitarist Adam Jones produces his most primal riffs since the band's debut, bassist Justin Chancellor an excellent bottom end accompaniment - and Danny Carrey? well Danny Carrey is the best drummer in the world, bar none (need proof? give Rosetta Stoned a whirl).
10,000 Days does seem to stretch Tool in two directions, in one way the album leans to a more direct style of the band's earlier work, in the form of album highlights "The Pot" and "Jambi," straight ahead rockers in as much as that applies to Tool. Tricky time signatures, rhythmic repetition as mantra and Keenan's ever probing but academic lyrics.
In the opposite direction is the epic two part "Wings For Marie" and "10,000 Days", an intense slow-burner that stretches his ever-building structure over a hefty seventeen or so minutes. Even the latter tracks such as "Intension" and album coda "Virginti Tres" display a more ambient style that was often used as segue on previous albums, rather than a whole track. Tool basically have their cake and not only devour the whole thing, but ask for seconds. I can only hope it doesn't take five years to serve up the next dish.
KEY TRACKS: Jambi, The Pot, 10,000 Days (Wings Pt. 2), Right In Two
4. ARCTIC MONKEYS - WHATEVER PEOPLE SAY I AM, THAT'S WHAT I'M NOT
After the glowing writeup i gave their second album, most of you might be thinking i'd place this album higher. Granted, it is easily the best debut album (along with Bloc Party's SILENT ALARM) of the last decade, and its placement at number four speaks more to the quality of the next three albums, and to the newness of this band. Needless to say, the Monkeys were a huge phenomenon at the begining of 2006. Thanks to hype built through touring, online marketing and word of mouth - you couldn't escape it. I was skeptical for a long time and when i finally did pick up this album late in 06, boy was i so glad to be so wrong.
The most striking thing is Alex Turner's lyrics, observant, catchy and witty, it is the element that will stay with you after the final track ends. From start to finish the lyrics are excellent, whether it is the drunken frustration of opener: "The View From The Afternoon" (And she won't be surprised and she won't be shocked/When she's pressed the star after she's pressed unlock/And there's verse and chapter sat in her inbox/And all that it says is that you've drank a lot) or the sly critique of closing track, "A Certain Romance" (And over there there's broken bones/There's only music, so that there's new ringtones).
The songs stretch all kinds of small-town stories including courtship (I Bet That You Look Good On The Dancefloor), domestic trouble (Mardy Bum) and creatures of the night (When The Sun Goes Down). All these engaging narratives are melded with equally alert music, in the same angular guitar style so readily popular in England today. Think somewhere between Franz Ferdinand and Kaiser Chiefs. Its the kind of debut album where a band arrives fully formed - musically and artistically - takes the world by storm, and hopefully, forges a long, satisfying career
KEY TRACKS: I Bet That You Look Good On The Dancefloor, Riot Van, Mardy Bum, When The Sun Goes Down

3. SOMETHING FOR KATE - DESERT LIGHTS
Easily Melbourne's best band, let alone Australia's, DESERT LIGHTS reasserts the group's genius after the lackluster THE OFFICIAL FICTION (2003). A tightly edited set of ten tracks reminding all of Paul Dempsey's inventive songwriting catapulting him to the throes of Australian rock legends such as Midnight Oil, Cold Chisel and Silverchair. The album opens with "California" a blistering rocker before heading to the amorphous "Down The Garden Path." Lead single "Cigarettes & Suitcases" blending catchy radio-friendly guitar pop with witheringly articulate lyrics, "This Is The Life For Me" and "Washed Out To Sea" are two achingly beautiful ballads, with the exceptional piano work of David Bowie luminary Mike Garson. "Impossible" and "A Fool's History (Pt. 1)" are filled with image-laden lyrics and creative musical shifts, while "Statues", "Transparanoia" and second single "Oh Kamikaze" ensure that SFK can rock with the best of them. These tracks are amazingly taut and effective in a live setting also (as the bands number of recent tours attest). Too much hyperbole? not at all; filled with variety, pathos and genuine fun DESERT LIGHTS is the quintessential Australian rock album of 2006.
Key Tracks: Cigarettes & Suitcases, Down The Garden Path, Impossible, Washed Out To Sea

2. THOM YORKE - THE ERASER
Anyone who knows me, knows that ANYTHING even vaguely related to Radiohead is going to get instant classic status from me, and frontman Thom Yorke's first record on his own is not about to break that rule. First of all i will comply with Yorke's pleadings that this is not simply a 'solo album' or 'side project', the music isn't too farflung from the musical realms of Radiohead. The production duties too are handled by Nigel Godrich, the band's stalwart producer for more than a decade. Despite the usual cliches associated with those labels, THE ERASER does manage to achieve what the 'solo' album moniker usually means, it allows freedom to try something a little different.
Musically, the album is akin to the likes of Radiohead's KID A (2000) and the more electronic leanings of HAIL TO THE THEIF (2004), but with a warmer core. Rather than losing his angelic voice in a swell of electronic percussion and dub, it is to the fore, with a track like "Atoms For Peace" a stark reminder of what an emotive voice Yorke has. Like a male Bjork, the music has a cinematic quality (as its soundtracking of such movies as A SCANNER DARKLY & THE PRESTIGE attests). Politics is certainly a strong part of the agenda too, with all tracks having a vauge political slant but none moreso than "Harrowdown Hill" an elegiac refrain to the disappearance of Dr. David Kelly (The Microbiologist who killed himself because of mounting pressure surrounding his involvement with the search for weapons in Iraq).
The creative juices are certainly overflowing, and while THE ERASER might seem a dalliance when there's a new Radiohead album waiting in the wings, Yorke's usual artistry ensures it is a valid statement all its own.
Key Tracks: The Eraser, Analyze, Atoms For Peace, Harrowdown Hill

1. MUSE - BLACK HOLES & REVELATIONS
And the top spot goes to Britain's Muse, their fourth studio album cementing their rise to becoming one of the most important, most innovative and most exciting bands today. Coming three years after the wake of the equally perfect ABSOLUTION (2003), BH&R seems to re-affirm everything great about the band while adding some new tricks and a broader appeal. So while the apocalyptic sci-fi stylings reign supreme in the guitar histrionics and arppegiated synths, there are some new angles that emerge from the sound and tone of the album. "Starlight," a stadium filling single if ever there was one, is like Abba in its orchestration and sheer hook-filled melody, but it grafts a romantic lyric to the epic twinkle and sheen. "Soldier's Poem" is a quiet, introspective track but juxtaposes it with a scathing political ethos, "do you think you deserve your freedom/no i don't think you do/there's no justice in the world/and there never was."
There is of course also the sexy armageddon that is "Supermassive Black Hole" combining disparate elements such as dance hall beats, a Prince falsetto and funky robot drums to winning effect. It performed an almost bait-and-switch, displaying some new tricks the band had pulled out of the hat while still retaining their hallmark sound.
As for the dazzling performances, Dominic Howard and Chris Wolstenholme are an effective rhythmic unit whil piling on the harmonies, but the kudos has to go to Muse's frontman. Matthew Bellamey is easily becoming THE virtuosic frontman, his staggering vocal range easily matching the late Jeff Buckley's and his various guitar and piano work is the album's heart, see his showstopping solo on "Invincible" or the drunken spanish guitar of "Hoodoo."
Each track is a confident and bold step, each displaying Muse's usual pomp and bombast, but tied to even more creative leaps in sound, style, structure - you name it. The highlight has to be however, the first time i heard the closing track, "Knights of Cydonia" all i could picture was the credits to a sci-fi spaghetti, and low and behold along comes the video that crystallises my vision. It honestly has to be heard to be believed, and could very well be this decade's 'Bohemian Rhapsody' and that alone has to be worth Album of 2006.
KEY TRACKS: Starlight, Supermassive Black Hole, City Of Delusion, Knights of Cydnoia
Aaaah phew, did you make it?
heres some honourable mentions to see this week out.
HONOURABLE MENTIONS: Razorlight - Razorlight, Pure Reason Revolution - The Dark Third, The Decemberists - The Crane Wife.
BEST EP: Battle - Back To Earth
BEST, BEST OF: Mansun - Legacy
BEST LIVE ALBUM: My Morning Jacket - Okonokos
BEST FOREIGN LANGUAGE: Camille - Le Fil
BEST COMPILATION: Radio 1's Live Lounge
BIGGEST DISAPOINTMENT: Pearl Jam - Pearl Jam
BEST CD ARTWORK: Keane - Under The Iron Sea check it out here
BEST CD TITLE: Arctic Monkeys - Whatever People Say I Am, That's What I'm Not
WORST CD ARTWORK: Eminem - The Re-Up cringe at it here
WORST CD TITLE: Khia - Gangstress
Posted by Al at 10:01 PM