For one with such a distinctively powerful voice, it’s only fitting that the tUnE-yArDs show begins with Merrill Garbus alone at the mic. Entering the stage solo, her diminutive frame shouldered by a mane of feathered pink tulle netting and bearing oversized, hooped earrings she quickly leaps into a series of chants and hollering. Her bright eyes darting and peering beneath her trademark face-paint (mimicked by some among the crowd), she demonstrates the full elastic range of her singing, at once warming up her commanding vocals and signposting their abilities. 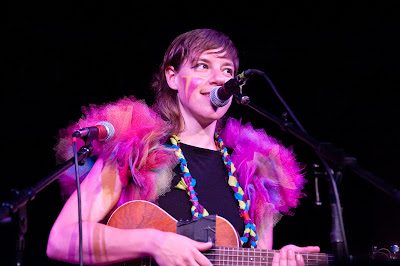 It’s at this point, before segueing with full backing-band flight into You, Yes You, that the key performance aspect of her style is made apparent. Building her rhythmic tracks and vocal textures with a loop pedal, she alternately sequences and structures her beguiling textures before the audience’s very ears. It’s at once a performance and a technical necessity in achieving the density of her songs. Once the loop is built from the ground up, such as the rattling pound of Gangsta or the forward-flick of Killa, she then uses that texture as another voice that is manipulated within the rest of the instruments playing. It’s slightly complex on paper, but in action, she makes it look effortless.
Even as they’re being shaped, her beats and grooves are as infectious as they are gently odd, fashioned from the unlikeliest of sounds: noises, polyrhythms, vocal tics and alternating blaring horns and distorted ukulele strumming. Without ever forgetting the simple autonomy of a sweet melody, or in the case of the sensational Bizness: several melodies, exploding in a technicolour display of vibrant sound. In the flesh, it’s giddily realised.
While Garbus is doing an awful lot, full credit is due to the introduction of a new two-man saxophone section that allow the bustling horn arrangements of the triumphant W H O K I L L (one of last year's best albums), to come to life on stage. As well as the chance for extra percussion on the wonky shuffle of Es-So. Striking a cheese grater and an oven tray respectively – perhaps in a sly nod to the song’s subtext about eating disorder. There’s room for some free-jazz wailing, using the rhythmic platform of Bizness as a springboard. Also effectively substituting Garbus’ vocal harmonies on Doorstep, before a coda that dissolves around bassist/muse/partner-in-crime Nate Brenner’s rubbery bass.
In fact, Brenner’s funky parts gives tUnE-yArDs its balance and form, dovetailing through, with (and sometimes against) Garbus' singing in a unique style of symbiosis. Though, his lucid lines are as likely to curtly break into stuttering or dissonant shading as Garbus’ vocal contortions are. Whether cheekily emulating a police siren on Gangsta, or growling her way through a national riposte on My Country, her lungs match her enthusiasm at every whooping curve. Even after breathlessly barking her way through the muscular chord punches of Powa, she’s still able to hit that pitch-perfect money note at the song’s climax.
That she’s able to maintain her vocal histrionics while juggling make-shift drumming, pummelling her ukulele or managing those ever-present loops; is a marvel. All while fronting a modestly sized ensemble, who generate far more than just the sum of their parts. Most importantly, she appears to be thoroughly enjoying the freedom of her music in the process, generating a cheerful rapport with the audience – it’s not till late in the set that she even needs to banter with them at all. Exuberant, impressive and utterly original, Merrill Garbus is as vital an intrepid kook in concert as she is on record.
tUnE-yArDs - Bizness (4AD) by Ragged Words
Tune Yards - Hatari by musicmule
Tune-Yards - Gangsta by The Recommender
Posted by Al at 6:05 AM