An album review for Beat magazine, originally published in issue #1304
The Unthanks - Diversions Vol. 1: The Songs of Robert Wyatt and Antony & The Johnsons (Rough Trade, 2011) 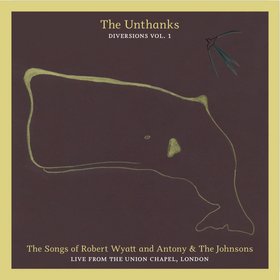 How do you finish a banner year after releasing a critically-acclaimed sophomore record? Well, if you’re contemporary folk act The Unthanks, by releasing a live album of covers, of course. An eclectic one at that.

Doing exactly what it says on the tin, Diversions is an unedited audio document of a one-off performance at the Union Chapel in London, in which the baroque five-piece lend their considerable voices and delicate playing to tributing two maverick singer-songwriters. It’s a warts-and-all account, even including their affable between-song banter, thick with the group’s Northumberland accents.

Split across two halves, it begins with a dedication to Antony Hegarty’s breakthrough LP, I Am A Bird Now. Faithful renditions of You Are My Sister and Spiralling demonstrate the band’s knack for arranging, but while the Unthank sisters’ (Becky and Rachel) dulcet tones are pleasing, the lack of Hegarty’s distinctive croon is gaping. Relying heavily on lilting piano and string arrangements, it contributes to the feeling that these are interpretations best appreciated by hardcore fans. The Robert Wyatt material, however, is more varied. The string section put to stinging use on Out Of The Blue, while Dondestan features both bouncy trumpet and the group’s trademark ‘clog stomping.’

As a whole, it’s a set whose renditions contain subtleties that only fans of the originals will appreciate. It says much for The Unthanks’ infl uences, but more to the power of the originals. For the rest, it’s merely a slightly vague introduction to a greater musical world.

Email ThisBlogThis!Share to TwitterShare to FacebookShare to Pinterest
Labels: Beat review, The Unthanks