Introducing... is a new segment for AMR, over the next few weeks, I'll be commiting to spotlighting a series of artists, bands and musicians to watch for 2012. To kick us off for the year is... 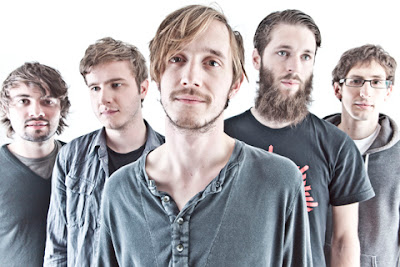 Already pinned with BBC's Sound of 2012 stamp of approval, and already selling out shows in their native UK before their debut LP is even available, Dry The River are touted to do what Mumford & Sons did for searingly epic folk-rock two years ago.
In fact, everything that's great about the East London five-piece is contained within Weights & Measures, a song that - since I discovered it laste last December - has been on permanent rotation since.
From the timid-yet-assertive opening phrase "you've made your decision/now get up and leave", to its cathartic climax, its a steadily soaring synergy of buzzing guitars, temperate violin and immaculate three-part vocal harmonies led by Peter Liddle's choirboy falsetto. Its heartstring-tugging chorus of "I was prepared to love you/I never expected anything of you" is rendered with the punch of a rock band, but structured with the harmonic vocal power enough to fill a cathedral.
Written, along with many of the groups' cornerstone tunes, by bandleader Liddle, after having dropped studies in music for a medicine course ony to find his way back to the comfort of singing and writing on acoustic guitar. Backed by Jon Warren (drums), Scott MIller (bass), Matt Taylor (guitar) and classicaly trained violinst Will Harvey; they've since worked their set to fine polish.
Dry The River contain all the usual elements of a folk-rock band: the stirring harmonies of Fleet Foxes, the lyrical heartache of Mumford, and even the spooky atmosphere of Okkervil River - and yet, offer a mixed delivery of style that is distinctly their own. With their debut album, Shallow Bed, just around the corner - they're ripe for world domination.
Dry the River - "Weights & Measures" by Dry the River
Dry the River - "No Rest" (Sample) by Dry the River
Posted by Al at 12:49 AM

Email ThisBlogThis!Share to TwitterShare to FacebookShare to Pinterest
Labels: dry the river, introducing