After fawning over their sophisticated arrangements and inventive sonics for some time now, last friday afforded me the first opportunity to see Sydney experimental outfit Ghoul in concert. Supporting Jack Ladder and The Dreamlanders in a sensational double-bill, they played few recognisable cuts from mini-lp Dunks but nevertheless impressed, with their delicate balance of electronic abstractions with blooming, organic songwrting.
If the swathe of new material they played was any indication, things are boding well for their highly-anticipated debut album. Brooding subs meet looping guitars while drummer Pavle Vizintin kept things apace with some deceptively complex rhtyhms over both live and sampled beats. Meanwhile brother Ivan Vizintin's characteristically haunting croon (part-Antony Hegarty part-Wild Beasts' Tom Fleming) kept the human element alive; even joking at one point that their unofficial fifth member - a laptop - 'helps keeps us in time." Can't wait to see what Ghoul do with the canvas of a full album, given their exciting palette, though their live show lacks a visual focus or a dynamic peak - their music is marvel enough to ensure them as a must-see.
Departing the stage, the strains of Bowie’s peak Eno/Berlin period, aka Low, began humming through the room, acting as a terrific mood-setter for the evening as well as marking a smooth transition to the steady throb of Beautiful Sound’s opening.  Flanked by his latest sidemen - The Dreamlanders, their line-up augmented by Andrew Hannaford (on loan from Ghoul) - and bathed in blue light was the man himself, Mr. Jack Ladder. Looking, and often, sounding like an outcast from a Tom Waits song, he commanded a curious presence through his wafting theatrics, as if in a trance, and more-so with his rich baritone. 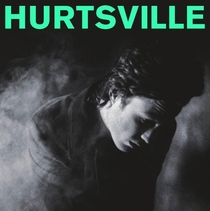 With a set featuring seven (of eight) tracks from his third album, the richly-formed Hurtsville, Ladder (or Tim Rogers to his mum) has transitioned from the guitar-toting, ragged soul and blues of his first two solo ventures for a darker vein of rock music informed by David Lynch films, icy gloom merchants Joy Division and Nick Cave. Oh yes, as much as he probably hates it, there’s no escaping the comparison. Particularly when touring his latest material, where Ladder focuses on the deepening power of his voice, as well as the shambling of his entranced gothic theatrics.


During ColdFeet his tousled bouffant gives him the appearance of a dishevelled Rufus Wainwright, lost in the steady pulse of the rhythms and stabbing guitars. During the gnarled blues of Position Vacant, his presence is sinister, like a zombie crooner. The smoky atmosphere lends an extra precision to his lyricism, though occasionally routine (Cold Feet’s ‘make like a tree and leave’), it’s more often like everyman poetry (‘a song’s just another word for a lie’). It’s a carefully crafted persona and presentation, with a soundtrack to match.


Key to their chilly excursions are the sounds that ex-Mercy Arms guitarist Kirin J. Callinan is able to conjure from his guitar, his impossibly loud playing rises through the mix like a banshee from a deep lake, dripping with reverb. His shrieking fretwork punctuates the spacious sonic landscapes with slashes of shimmering echo as well as screeching tremolo splashes. It’s a thrilling counterpoint to Ladder’s melancholic croon, particularly on the ghost-train scare tactics of ShortMemory - teetering on the brink between cacophonous feedback and iridescent triumph.
Another set highlight is Hurtsville, the song, its ‘breaking out of small-town drudgery’ narrative is vintage Born To Run-era Springsteen; albeit delivered in slow-motion with a bruised sneer. Its followed by the gentle bob of Dumb Love, with its stuttering, cathartic chorus of ‘Du-du-du-dumb love.” Meanwhile, new track Three Stomachs, No Weekend and final encore You Won’t Be Forgotten, allow the group to break free from their typical slow-burn anthems to rumble freely in the former and generate an industrial grind of drum machines and jutting shapes eloping with Nick Cave vocal leering in the latter. 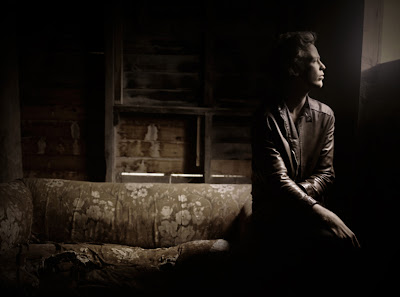 It’s a strong finish to a fine performance. While some would find the highly stylised surface distracting, unable to move past it, it would be equally unfair to dismiss Ladder’s act as simply disingenuous brooding. There’s a genuine craftsmanship to his songwriting and performance that underpins with resonating pathos and drama. You wouldn’t pick his rain-slicked hubris as an aphrodisiac, but the swaying couples dotting the crowd prove that the romantic undertones matter as much as the noir leanings.

That Jack Ladder and the Dreamlanders are able to recreate the depth of such a specifically sounding record without sacrificing the energy of the live arena, is evidence enough of their talent and dedication.
Posted by Al at 6:18 AM