The UK Adventures of [ME]

You may know the story, excellent local band sets off to foreign shores seeking fame and glory.
While many bands find success by touring our not unsizeable nation relentlessly, earning tags like 'hard-working' or 'live instituion,' there are many more who find Australian acceptance by first 'making' it overseas. Think of talents like Lisa Mitchell, Sarah Blasko who blossomed from their journeys in London and America respectively, or the old big in America - big at home idiom that beset INXS and Silverchair. It's a strange thing, but one that many burgeoning bands must face.
In fact, in my talks with bands like Alpine and Big Scary they touched on the limitations of touring Australia, and more specifically with Kins' trek to the UK to record, whose own Thomas Savage put it best: "big landmass, not many people."
Which brings us to [ME]... 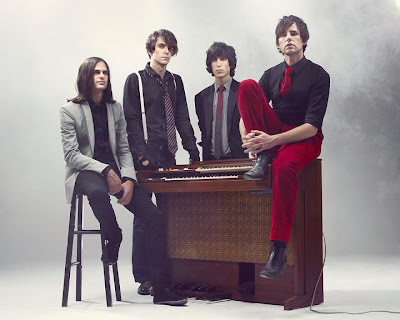 I first stumbled across [ME] and their 'Tchaikokrocksky' via a friend of a friend's burlesque/indie-folk act who were supporting their headlining East Brunswick Club show in which they were launching their brill track/video Westward Backwards. Initially I was blown away by their huge, professional sound, a balance of the grandeur of Muse with the pomposity of Queen all delivered in a grand flourish that made the modest confines of the Brunswick Club feel like an arena show. 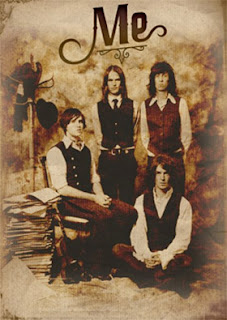 AMR: The theatrical elements of your music is often compared to English acts like Muse and Queen. How do you feel about those comparisons?
D: Not sure. We play and we write. What we end up with we’ve either liked it enough to play it some more, or we’ve stopped. A lot of people expect bands to do more than that. I don’t think we’re any less influenced by System of a Down as we are Mozart’s balls as we are fucking Grease Lightning. They’re all just a bunch of dudes playing - and I think a band is better off spending their time playing and writing than stopping and comparing what they are playing and writing to some other dudes that are playing and writing. I should stresss, use of the word ‘dudes’ is for either lads or ladies!
AMR: There’s also a classical or cinematic element to the music, how is this influencing the writing and/or recording process?
D: It’s making it a much more involved process. We have sung hundreds of harmonies on this album. To make sense of what orchestral/instrumental parts we wrote there’s two arrangers involved, which turned into weeks of orchestral instrumental recording. Suck din Barny and Ian! Have fun mixing boys!
AMR: There’s been mention of string orchestras and grand pianos during the recording process, can you talk about their involvement?
D: Yeah, it happened and we took footage [to prove it]. Actually we didn’t realise how much orchestral stuff we do until we recorded this album. I think next album we’ll make fucking ELO look like a pan-pipe band. With the piano it was always going to have to be a grand. Three of us in the band have the crippling fault of character wherever there is a piano in sight, we must (fight each other in order to) play it. We notice piano shops while on tour. One day Luke wants to own a red one.
AMR: What can we expect from the debut album – song-wise. Will there be tracks from the Naked EP as well as previous singles – or can we expect mostly new material?
D: A bit of both! The Naked EP is an Australian-only release but there’ll be tracks from that on the album, re-recorded, and they’ll all be new to the UK and European audiences. There’s also talk of a trip to America so it will be totally fresh for those bodacious dudes too.
AMR: Can you discuss some of the songs and how they sound? Track titles for instance, or particular elements and styles you’re creating?
D: The one I want to discuss doesn’t have a name, but Barny wanted to make it sound "relentlessly banging". It has had a few incarnations in the studio, and tons of random instrumentation thrown on it. Sounding good. Elsewhere, there are a few choral and orchestral surprises on there too. One song which also got reincarnated has a kind of mariachi brass orchestra on it. Plus there is ‘prepared piano’ on a cut or two.

AMR: The visual element of your band – the artwork and videos in particular – has always been a key part of your appeal, what are you working on in terms of the album in this regard?
D: Despite always being left to the last minute, we have two towering archangels of visual providence which have selflessly created our visual element so far. They are, Andrew Goldsmith who did the music videos for Westward Backwards and Naked; and Ken Taylor who has done the artwork for the singles we released in Australia and the Naked EP. In terms of what's next, we have a meeting with some video dudes over here in the UK to get a bit more of a run-up for our February single.
AMR: How are you planning to support the album? Are you remaining in Europe to tour and solidify a fanbase or are you returning to Australia triumphant?
D: Not sure. We used to self-manage so it’s great to pass a lot of those decisions onto people who know what they’re doing much better than us. We have an absolutely exceptional team here in the UK and it’s starting to spread into Europe and the USA. I’m really excited to see how the album and next two singles will be received here. We will definitely be releasing those in Australia and return for a tour, some crazy launch shows and festivals. We do miss our crazy Australian launch shows! It will take us a while longer to recreate them at full effect here.
Posted by Al at 11:59 PM

Email ThisBlogThis!Share to TwitterShare to FacebookShare to Pinterest
Labels: [me], interview