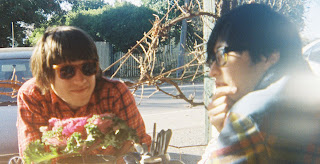 With its dual rows of stiff pews and a slightly raised wooden platform, the front-room of The Butterfly Club retains the air of a church gathering or a musical recital. It’s not your typical venue for a band booking, but then, nor is this your typical gig. How often upon arrival to a venue do you receive a complimentary tea-towel (emblazoned with the artists’ lyrics)? It instantly puts the homely vibe into the launch for Melbourne-based musical maverick Yeo’s latest album, Home, which itself is not your typical Yeo album.


A collection of homespun acoustic tracks, down-tempo Americana and folk-leaning rock, it ditches Yeo’s previous bedroom polished preoccupations with DIY funk, indie pop and rubbery electro for a contemplative set of pure singer-songwriter storytelling. As he explained last we spoke, Yeo wanted the accompanying shows for the internet-only (and currently available for free) release of his third independent record to be “more off-the-cuff.” The Butterfly Club, usually a venue reserved for emerging cabaret and theatre acts, could be none more boutique.
Squishy, even for a seated capacity of fifty, and sweltering, thanks to Melbourne’s current heatwave, proceedings were kicked off by the newly-formed Dr. Wang. A straight-ahead four-piece, they are, ostensibly, the new side-project for Little Red bassist Quang Dinh. Don’t let that association mottle your opinion though, here performing their virgin gig, they are visibly battling with nerves - all heads-down in focus with necks skewed at naught but their fretboards. It takes a spirited cover of Dylan’s This Wheel’s On Fire to draw smiles and sweat. The group nonetheless assuage their jittery presence for a pretty solid five-song set for their first official live performance. Opener Monkey Blues has all the couture of a woozy rock staple, while they check the box every young band should, that of the 3min pop song in the form of Hollywood Boulevard’s four chord catchiness. 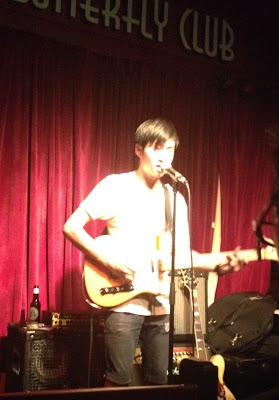 There’s little ceremony to Yeo’s entrance, beginning his set already on stage, he sets the casual tone for the evening. With a clean, simple set-up with next-to-no technical emphasis save for the hum of the air-con as he laughs his way through a very bum chord in the first song, and later asks about the sound mix mid-set. In plain white t and denim cut-offs, he maintains genial banter with the crowd in between wiping down his black fop of hair. Despite the relaxed tone, his audience is reverently quiet, save for the quiet singing of the dedicated.
Trading an acoustic guitar for the flexibility of a Fender Squire (with nary a key-tar in sight), there’s no attempt to facilitate the lush backing of Home in the live setting, save for drummer Luke Brennan. He is key to fleshing out the sound, a perfect foil to Yeo’s everyman charm. His light brushes add the much-needed swagger to his guitar strumming, while his vocal harmonies and harmonica (talented lad) wrap around the singer’s alto in fair union. Their dynamism across the set of plaintive numbers is pure, not even a bungled intro or a wrong note on a toy Casio can stem any friction.
When he switches to sticks though, as on the upbeat rock of August28, 1978, his cymbal drowns out the guitar, and much of the melody. Hardly his fault (or the sound guys’) in such a cramped space, but further proof that the tunes with the best affect are those at their most intimate. Namely the bedraggled poignancy of Making Peace With Margaret or No Lines At High Tide. The finger-plucking up-tempo single Selma Blair is an exception to the rule, while Door Frames’ sidling twang and melodic ease are another highlight. In this configuration, Yeo’s tunes may lack some of the oomph of their recorded counterpoints, but lose none of their yarn-spinning impact.
The opening lines of At Rest “drank my scotch to its feet/now I’ll tell you a story, so take a seat” could well be a mantra for the night, if not the album. Laconic storytelling that, stripped back all of Yeo’s studio-bound lustre, focuses on the chaste appeal of familiar guitar chords, a warm voice and some words to enunciate it with. With of course, minor embellishment from his fellow sticksman.
The two-man faux-acoustic set-up won’t work in every setting, and its unfussy charm may be lost on those unfamiliar with the record whose mood it draws from, but for tonight and among such selective company, Yeo breathes calm life into his charming, rustic set.
Posted by Al at 2:42 PM