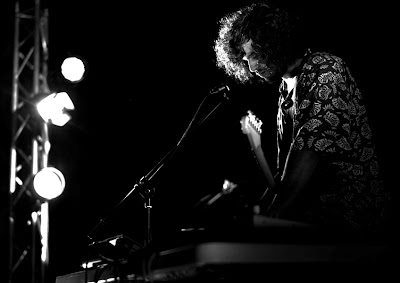 It was clearly a night for loop pedals…
In support of Oliver Tank (who's just been Introduced) on his first date of his Dreams EP launch tour were local Melbourne artists Kikuyu and Wintercoats, both artists who relied on the distinctive piece of tech to bring their textured solo projects to life on stage.

Upon arriving at The Workers Club, and its distinctive wood-panelled (and patterned) bandroom, Kikuyu – or Sez Wilks to her mum, was already laying down a rhythmic pattern with some ‘cha cha cha’-ing, then coating it with her quaint keyed lines and vocal harmonies.
Her approach to the loop pedal is more subtle than most, before you know it – on the likes of Summer Helicopter and Swimming Blue – she’s constructed a cyclic refrain of voices and pretty micropop. Her set-up is equally modest, an old Italian combo organ held together by blue gaffer tape (‘it matches my outfit’ she exclaims) complimented by the tinny beats of a dinky toy Casio, and of course, her own vocals. Homespun is the vibe, even dressed like a retro-chic version of a fifties housewife, and she’s confident and likeable.
Conversely, James Wallace aka. Wintercoats, is perhaps stronger on record than in person. Sequencing his own violin playing, his string constructions take a long time to slowly form and get going, then even longer to depart. Often overstaying their welcome by repeating a similar set of tricks. Tapping and flicking the body of his instrument for rhythm tracks, or even singing into its hollow body, were the key exceptions; but his beautiful sound was too often swamped by a dense noise of its own looping textures. The lush beauty of Windmill and Delicate Position don’t translate in this busy context, he needs an editor or a fellow string player to shoulder some of the slack.
Of course, it was Oliver Tank’s night, and the sold-out status of tonight’s show includes a swathe of knowing music fans and hipsters (the particularly chatty kind) out to catch his "heartfelt computer music". He casually graces the stage to a roar of appreciation. Opening with an edited version of Past Present Future, a fifteen minute piece originally produced for FBI radio, here condensed to a no-less affecting five. He begins cruising and boobing to his own beat-making, his head down in an explosion of thick, jet-black curls. He might be alone at the stage, but unlike his support acts using similar technical set-ups, it’s not just his music that fills the stage, it’s his presence also.
Despite some awkward dancing, he sounds terrific. Wearing a chunky set of black headphones worthy of a DJ, he’s clearly producing as he’s playing - the soothing alto of his voice sliding through the folds of his polished electronics. Using drum pads, keys, samples, a loop pedal (of course) and live guitar to achieve the blissed out mix he labels ‘dreamwave.’ He’s careful not to overwhelm the warm embrace of his lush beats with unnecessary flourishes, there’s just the right amount of treatment to his voice and even his shimmering guitar is understated.
His music, despite its mechanical construction, possesses a tenderness. It’s obviously enhanced by his simple, gentle lyrics. Up All Night, with its comforting refrain of ‘will you teach me how to dance/real slow,” is like a digital lullaby, while the glitch-pop of I Love You caresses with its deep reverberating bass and restrained click track. It’s at this point that many would be swift to make the ‘Sydney’s answer to James Blake’ comparison (like the lass in front of me who 'checked in' on facebook with this exact phrase). A cut like I Can’t Sleep however, hints his influences may be closer to M83 – complete with the sparingly effective use of guitar shredding, big echoing drum fills and even an obscure spoken-word sample that could have come straight from Saturdays = Youth. Thankfully he’s no more an imitator of Anthony Gonzales’ emotionally-charged electro as he is Blake’s post-dubstep troubadour stylings. Tank has quickly asserted his own methods and sonic voice, while reminiscent of others, its clearly distinctive in its own right. More-so in the live setting, where the ambience of the room allow the space and atmosphere of his dreamy tunes to really breath.
The set also included his spaced-out rendition of Snoop Dogg’s Beautiful. Though its booming rhythms and washes of synth are still lovely, with its awkward semi-rapping (and touchy use of the ‘n’ word), it’s a novelty that Tank can afford to put him behind him now he has a consistently strong set of originals. The other major criticism of the evening is that his set is criminally short. At about half-an-hour, and especially considering it was the launch for said EP, only about half of Dreams was on display. Shorn of an encore, he leaves the crowd baying for more. Not before delivering the rousing track that has propelled him into the spotlight. Last Night I Heard Everything In Slow Motion, segueing from the caressing I Love You , remains the conflation of Tank’s appeal. With subtle auto-tune on his affable voice, it glides towards its climax of delicate string swells, replicated with samples and guitar washes.
Even with a brief six-song setlist that perhaps prioritised quality over quantity, Tank’s position as an emerging talent is crystal-clear. Able to capture the warmth and clarity of his music in the live setting, it won’t be long before he’s playing larger venues with, hopefully, longer running times.
Latest tracks by Oliver Tank
Posted by Al at 6:11 PM