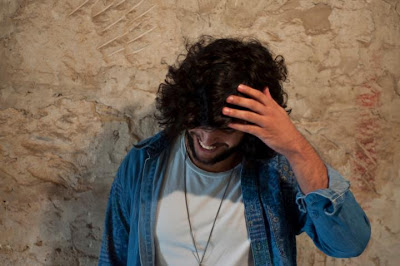 A 22-year old wünderkid who produces his own music with a mix of live insrumentation and electronic elements best touted as 'post-dubstep.' No, it's not James Blake - though comparisons to the English artist are tempting... we're talking about Sydney musican Oliver Tank. With an ear for minimalist arrangement, he fuses warm flushes of electronica with his own, gently affecting voice.
Though he first came to the attention of the blogosphere with an unlikely chilled out cover of Snoop Dogg's Beautiful, it was through the triple J Unearthed spotlighted Last Night I Heard Everything In Slow Motion that he confirmed himself as an emerging talent. With subtly manipulated vocal harmonies over a bed of gently chattering beats and some stirring string arrangements, it demonstrated his music possessed an inherent emotional breadth. A sting made all the more potenet when it was chosen to score Get Up's successful marriage equality ad campaign.
He's already been toasted by youth radio stations as part of triple j's Next Crop 2011 and taking out the category for 'The Next Big Thing' at FBI's SMAC Awards; as well winning their Northern Lights competition which saw him heading to Iceland to play a major festival. He's even got the international press in a tizz, playlisted in the UK on XFM and BBC1, and NPR in the US.
The tail-end of 2011 saw the release of his debut EP, Dreams, on Sydney indie label Yes Please. Containing a set of equally blissed-out bedfellows to match Last Night..., a stylistically succint collection of soothing, nocturnal tunes that are as likely to hypnotise as they are to break your heart. Tank's voice gliding over supple beats and ringing guitar, as well as including two deft guest performances from singer Fawn Myers.
Having recently only finished Uni, he's now dedicating more time to production, songwriting and touring. Making 2012 the year to built on his already steady momentum. In fact, he's currently playing a national(ish) tour to launch Dreams, and AMR will be attending The Workers Club tomorrow night to see him play - watch this space.
Past Present Future by Oliver Tank
*             *             *
You can catch Oliver Tank touring nationally on the following dates:
Jan 20: The Workers Club, Melbourne VIC (with Wintercoasts, Kikuyu) $10 Jan 26: Fat Shan Record Store, Perth WA (With Anton Franc, YLEM, Sam Perry) $30 Feb 3: Bridge Club, Brisbane QLD (with Oh Ye Denver Birds, Anoymeye, Silo DJs) $10+BF Feb 9: Paddington Uniting Church, Sydney NSW (with Winter People) $10
Posted by Al at 11:41 PM