The following live review was originally published in Beat magazine, and online, it is recreated here in its entirety. 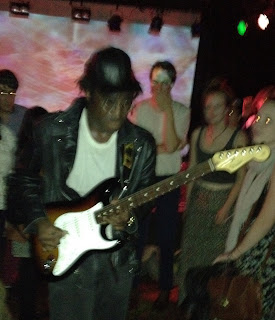 It was this time a year ago that Devonté Hynes last visited our shores under his old moniker, Lightspeed Champion, in what was touted as being a full show with backing band turned out to be a solo gig, a rather baffling one at that. At its worst it was glorified karaoke, in retrospect, the shy, wooly-jumpered indie kid that attempted to rouse a near-empty East Brunswick Club was one in a phase of transition.
Jump to twelve months on, and several blocks away to the Northcote Social Club, and Hynes is a man in a more assured mode. Namely as Blood Orange, his new musical guise that turns back the clock on the lush, baroque pop of Lightspeed Champion to the slick eighties funk and soul thatscored the neon-lit discos and bars of nocturnal New York City.
First spotted pre-show, mingling front-of-stage during the psychedelic rock slashes of support act Tehachapi, Hynes was bedecked in tattered jeans, a leather bomber jacket and matching cap. Looking like a cross between an outcast from The Warriors and Marlon Brando in The WildOne, his stylistic references are as much cultural as they are musical. His tales of lovesick frustration, delivered with a sticky, soulful croon and a pared-back rhythmic bottom-end, are far-better suited to his one-man shtick of laptop, mic and modest guitar-shredding. 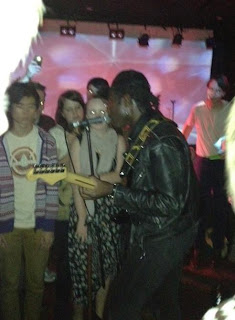 Swiftly forgetting an awkward start, Hynes soon broke the stage/audience boundaries by diving into the crowd – mic-stand and all – to occupy the crowd. A slightly shocked audience, at first splayed at having the fourth wall so clearly shattered, are still full of respect , as if afraid to interrupt his performance. By Forget It, with its breathless pace and catchy refrain of “I am not your saviour” they’re back to treating the room like a dancefloor and less like a space the artist has breached.
Spending the rest of the show flitting between stage and audience, Hynes continued to sweat out a set of sleek and sultry grooves. The loping bass and crisp beats, featuring robotic snares that sound like snapping wood, formed a firm backdrop while Hynes focuses on his guitar shapes stuck in faux-oriental mode (that’s the pentatonic scale, for you music theorists) and his fresh falsetto. Hovering somewhere between a young Michael Jackson in balladeering mode and obscure French pop star FR David (a self-proclaimed influence), his phrasing captures the feathery edges of his voice as he croons in an upper register suited to the female voice, some even sung from the perspective of a feminine protagonist. Lending lines like Champagne Coast’s “come into my bedroom” an androgynous allure. It’s this hint of sexual allure mixed with the dark, bleary-eyed R&B that makes Blood Orange engrossing, but it’s not the first place you’d find an energetic solo show.
Even stripped of the pulsing kaleidoscope projections, it is essentially a glorified performance of one guy overcoming his introverted ways for showmanship.  A knees-bent, needling guitar solo to finish the hour-long set was an indulgence too far, but the Blood Orange live show lends his swollen grooves a robust edge with Hynes; the vaguely reluctant lightning rod literally at the centre of it all. It’s a spectacle that is nothing if not interesting.
Champagne Coast by Blood Orange
Sutphin Boulevard by Blood Orange
Posted by Al at 1:13 AM