Radiohead - The King of Limbs
Opening up the zip file, here are the facts: 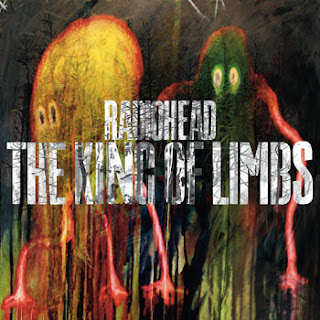 1) Bloom
Some twinkling looped piano, some strange looped effects - including Selway's familar off-kilter drum patterns begin the album, it's all cut and reverberated through. A minute in and we have Mr. Yorke's first appearance, "Open your mouth wide" as far as openings go, it's distinctly Radiohead, at least in their Kid A/Amnesiac experimental electronica mode. Yorke's soothing, drawn-out vocal contrasts nicely with the mathematic repetition and bubbling bass just behind him. Can even make out some of those skittering effects that coloured Like Spinning Plates. About halfway through the track and there's some more orchestrated colouring, horns, strings - all moving in ascension with some haunting harmonies. A short breakdown and the vocal line returns, with some equally yawning horns in tow. As is usually the case with all things 'head, it's beautifully textured, and coloured. As far as opening tracks go, it's more Packt Like Sardines than Airbag or even 15 Step, but perhaps it's a taster for what's to come and not the firecracker that will ignite it. Bloom seems a farily appropriate title then...
2) Morning Mr Magpie
Wow, this is not the version I remember, some spidery guitar work is fractured into some more textured looping, pattered snare. Yorke's vocal melody pierces over the loop, in sound it feels like an extension or a coda to Bloom. A vast change from the acoustic rendition that people may be familiar with from those Xmas podcasts all those years ago, transforming familiar tunes has always been the way the outfit do things - think of the shifts from early versions of Nude or Videotape to their album versions, not worse, just different.
There's some glimmer of the original as the textrues fade away to leave a low plucked guitar, some incessant vocal textures, and a stubbed bass pattern. It's all careening foward with delcious momentum however. Not necessarily building upward, but building none the less, like a rolling wheel. There's some interesting production going on in the background effects, very delicate swoops of guitar and ringing distortion. My memory's not great but the lyrics have change a bit too "Mr Magpie, you stole the music to my melody." A bit of light static into a fadeout and off.
3) Little By Little
Cool, sort of a lolloping rhythm with some chattering percussion pushed to the fore with guitars doing their low-slung bluesy thing a la Knives Out, I Might Be Wrong, Paranoid Android et al. Yorke continues a woozy delivery "the last one out of the box/the one that broke the spell," the 'bridge' (let's call it) has him delivering some sing-song patterns like "i'm such a tease/and you're such a flirt." That chattering percussion dies away to let his nagging descending line hit home, "little by little/by hook or by crook." Some more rhythms fill out the patterns, that chattering, but also some electronic high-hat work accentuating the syncopation. There's some sort of shimmering harp/guitar-esque chord that keeps appearing too, and then it's reversed to add a psychedelic flavour. The impression so far is that this is a rhytmic album, with a lot of dense textures built on fractured repetition. Sort of electronic music done with a live band setting, and so far - lots of gutiars. Always interesting to see how Radiohead will adapt their instruments. The result is a million miles away from, say, The Bends - but it's still them. It's probably a bit earlier to call - but it feels very different to In Rainbows thus far. This is however my favourite track, three tracks in.
That nagging chorus and nursery-rhyme thing, combined with the jangling rhythms is very catchy. You can totally picture Thom doing his 'wobbly-head' thing to this live.

4) Feral
Another jazzy drum break, with very light chords punctuated over the top, as drifting away into the distance. The vocal enters, heavily treated and modified, a la Kid A's title track. Mr. Greenwood's bass enters the fray briefly only to depart again. There's swells of Thom's voice splaying and morphing off the walls. A little like Everything In Its Right Place's coda, but a lot more spooky. A little into it and there's something more solid, a sub-woofer testing bass rhythm that complements Yorke's cooing - oh and more treated vocals - bit like Pulk Pull/Revolving Doors. Can you tell I'm struggling to describe the experimentalism going on here? And at 3:13 it's the album's shortest track, a curious interlude. File under: Amnesiac outtake.

5) Lotus Flower
Judging from the fact that it was released with a video of a wild, whipping Thom Yorke - this could very loosely be described as 'the single.' Though that term has little effect with a band like this anymore. No matter, a simple bass part is played out over a signature Phil Selway drum beat. All off-beat accentuation. A plucked guitar part rises through the mix to offset the drums, some handclaps echo lightly in the background; and that keys part is palmed off to the bassline. Again, this is in stark contrast to the earlier versions that the group have played before. Much more electronic and building on textures. Yorke slides into his timeless falsetto for the chorus, a nice fluttering melody against some rubber key work. The final line "listen to your heart" has the last word sliding and mirroring into itself, as if duplicating endlessly as the keyboard line thickens. The second verse sees Yorke retaining the higher register and more echoes of the vocal line disseminating into strange echoes. Strange single then,

6) Codex
ahhhh, the swoon of piano. Treated of course, but lush, full piano chords nonetheless. A very soft blip pulls the rhythm along, like a heart's pulse. While some sort of shimmering bells glisten over and through the chords. This is the 'quiet one' then. The piano sounds like its sinking underwater, or floating just beneath the surface and Yorke's vocal is crystal clear in contrast. It seems that Nigel Godrich still lends a peerless subtlety to the band's sound and arrangement. Later, there's some sort of muted horn that doubles the vocal line and remains - like some sort of foghorn in the night. Then two of them, move in contrasting harmony around the refrain. It's a beautiful track, simple, but some tricky production - like a ballad in slow-motion. Lots of references to water, which probably triggers that equally aquatic sound. About four minutes in, and there's a shift in tone, some trilling strings enter the fray, just blinking gently underneath - moving the track back towards its solemn piano chords, before a small audio coda that sounds like static wind blowing through the trees before it's sped up to reveal birds tweeting and becoming the opening for the next track...

7) Give Up The Ghost
This seems pretty faithful to the version that Yorke first debuted in his solo show, using the same loop pedal to repeat the background choir hook, complete with the thud of the palm on the acoustic guitar and clear, bright chords, emphasising the two-chord pattern. After a verse or two, and a keyboard sounding like a harp is added, some deft arpeggiating that supports the guitar strum. It's all quite beautiful, some reverb on Yorke's main vocal, and more vocal parts added to the main hook, some dancing around the main line. It's that same texture-building, cut-up arrangement of the opening tracks but applied to a much more fragile track. But rather than rolling, this one does build. More and more to the sound, reaching its apex with the line "into your arms" there seem to be dozens of little vocal melodies echoing and flashing across the main guitar pattern now. It's beautiful, hypnotising even. Those voices fade away, leaving the guitar/harp/key part and some more skittering effects a la Like Spinning Plates. We've just found another favourite track.

8) Separator
A light drum breakbeat brings us in, an incessant piano note each bar, and some wobbly synths. Then a jazzy bass-line plucked by Mr. Greenwood - on a double bass. Very nice, very rich. Yorke's vocal has a light delay on it, playing against that repeated piano note. The combination of the upright bass and the light breakbeat has a distinctly jazzy feel, like something some old-skool hip-hop would sample, if it wasn't for those strange keys whistling about the place. This'll be interesting to see live, there's more self-sampling going on too, cut-up vocals and repeated key parts. The guitars start to enter, offering light trills and fleet harmonics. Think the guitar work of early Television or even R.E.M. at a more relaxed pace, this like Give Up The Ghost before it, is building. The guitars cease to pluck and begin to move in washes and waves.There's more colours filling out the corners, all the whle the drums and jazzy bass keeping the foundation steady, but light. The guitars start to descend in discrenible shapes as the bass releaxes into just emphasising the chord changes. A lovely end.

...but an abrupt one. Is that it? It's concise, that's for sure, at just under forty minutes. It's easily the band's shortest album. A few minutes shy of Pablo Honey, not a great comparison, but it's interesting that even after an almost four year wait, the band have settled for, what is by today's standards, a shorter album. To be fair, they've learned their lesson. Hail To The Theif came under fire for being too long, in reality it probably wasn't - in fact at the time, fourteen new tracks from one of the best bands in the world wasn't too much to take in - but it's length certainly ended up being a sticking point with critics. The point is that, it's not really too short, it's delightfully concise. But one can't help but wonder what was inevitably cut from the shortlist, will there be a second disc of material as there was the physical release of In Rainbows, or another release further down the line, such as Amnesiac was to Kid A?
First impressions are that it's a heavily textured album, it doesn't feel to have the variety of In Rainbows nor the thematic consistency of OK Computer, but these are early days. If the subtle production is anything to go by, and if their past work is any indication, there are plenty of secrets and treasures waiting to surface after multiple listens (and don't worry, there will be many). In short, it's a instrospective, subtle and, dare I say it, futuristic? You can almost imagine it being the kind of jazz-inflected, space-rock they'd play in a club of the future. Or dub-step for lovers of krautrock, or some other ridiculous configuration of genre labels, because in essence they've produced another album that is uncategorisable. Isn't that why they're so beloved of real lovers of music the world over? breaking down barriers and styles. To create something totally unique, you can probably tell from this post that all the callbacks to past songs and albums are the sole reference points for these new creations. But it's mellow and beautifully strange.

As I said before, with the arrival of In Rainbows, " The task of judging any new Radiohead release is a complex and tricky affair" indeed, so instead I'll leave the judging till later, when the album's had time to sink in. And to do that, i'm just going to pop off now and listen to it again.
Either way, today is a piece of history, new music from one of the industry's most compelling, individual, unique - and obviously excellent - creators is always an event worth noting. And the digital release means that there's a proper sense of anticipation and occasion about the whole affair. Thanks for being part of it, now go and make your impressions, cause that's what counts - and I suspect that's the aim of Radiohead's whole intention.
Posted by Al at 4:03 AM