Last Friday, I got the chance to check out the wonderful Alpine, who you may remember from
their impressive Zurich EP (or their previous appearance on AMR in this post). Well, here's a little write-up of their inaugral EP launch. 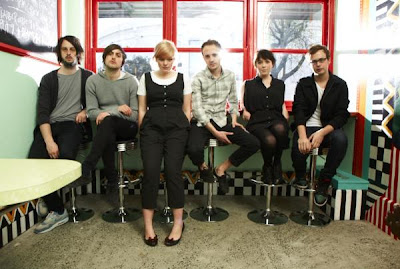 It’s quite a milestone to sell out The Corner Hotel for an EP launch, particular if it’s the only recorded output to your name. But young local outfit Alpine can tick that achievement off their bucket list. The room was abuzz, and with the exception of a few possible chaperoning parents, swarming with young, stylish things (usually clued in to these sorts of things). The vast majority of which were fashionable females. Once the sextet took the stage, it became understandable, they look pretty fresh themselves.
After a brief warm-up tune, the group launched into Too Safe. A favourable demonstration of their skill, with each member of their line-up disciplined into interlocking parts. Insistent choppy guitars meet a rising bass line, while sparse drums punch out the beat as the twin waif vocals of Phoebe Barker and Lou James soften the edges and sweeten the delivery.
The dual lead vocalists works a treat, the two girls up front with the four lads providing the shoegazing sway in the background. It’s like getting two front-women for the price of one, and they never attempt to upstage each other, instead pulling the old yin-and-yang dynamic. Right down to mirroring their glam eye make-up but contrasting dress-sense. Barker in vampish black to match her tousled red locks and James in a svelte pair of silk summer shorts and cropped bob. Occasionally they do cramp each other, while on record they’re perfectly pocketed to complement, live, their lines can sometimes blur. In fact the following Winter Coats falls into this trap with the vocals and guitars hovering around the same muddy range. Just before it looks doomed to a hazy death however, the singing parts split into divergent parts before hitting a transcendent peak of sky-scraping guitars, splashes of synthesizer and driving rhythm section.
In fact Phil Tucker’s stripped-back cut and lean approach goes a long way to thinning out their sound and tightening their momentum. The rhythmic emphasis would be jerky and agitated if it wasn’t so well organised. Seeing Red, a new track, is a set highlight with a spiky rhythmic economy that slows the choppiness of Too Safe into a Foals-friendly bobbing groove. Tough Skin’s plucked guitars and circular mantras work a treat with the crowd but another new number, The Vigor, hasn’t quite got the kinks ironed out and fails to capitalise on the energy. Better they should have dived headlong into Heartlove, which sees the entire line-up at their most animated all night. It helps that large whoops from the crowd means its recent radio airplay hasn’t gone unnoticed. All leading tidily to new single, and possibly their best track, Villages. By this point Alpine are relishing their performance as much as the crowd – particularly in the build from its downtuned guitar hook to its thumping, disco-beat driven chorus. All spiralling vocals and Ryan Lamb’s chugging bass.
The amped response for an encore warrants a strong finish with Icypoles, whose extended coda attempts to whip up a new-wave dance party to close the evening. You can’t just be any old band to not only fill, but ‘play’, the Corner; and the appearance of one Bertie Blackman in the crowd is surely some kind of stamp of approval. But Alpine have proven that there’s an enviable live show to go with their perfectly crafted Zurich EP.
Their status as one of Melbourne’s buzz bands is justified, and with more shows of this calibre: tight, well-rehearsed sets that favour quality over quantity, the ‘ones-to-watch’ label may spread to a nationwide status.
Either way, one things clear – if you’ll allow the pun – Alpine are scaling new heights.
Check out a photo montage of the night over at FasterLouder
Then the suitably eerie vid for Villages:
Posted by Al at 11:55 PM