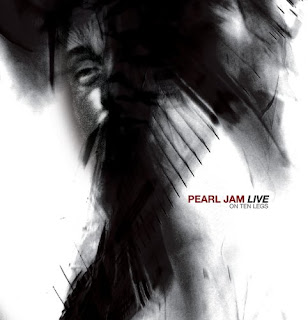 Let’s be clear, the grunge survivors aren’t so much a band in the traditional sense anymore as a live institution. Like The Grateful Dead before them, Pearl Jam have established their persona through a ceaseless schedule to rival that of even Dylan’s Never Ending Tour. They don’t so much tour extensively as they do live on the road. As such, their studio output is now a more rare occurrence than the long swathe of bootlegs between them.
With the wide array of recordings on offer, both official and otherwise, one has to wonder as to the point of yet another live collection. There are already more interesting (the acoustic Live At Benaroya Hall) or extensive documents available (the seven disc Live At The Gorge set). So what does Live On Ten Legs have to offer?

Intended as a spiritual successor to 1998’s Live On Two Legs, it supposedly cherry-picks from between 2003-2010. If that’s the case, why then are we saddled with yet another rendition of Jeremy or Rearviewmirror? Tracks even the most casual fan has heard a dozen times before. It’s no surprise then that the freshest sounding material here is the newest, taken from 2009’s Backspacer.
To the group’s credit, they still attack old standards like Animal and the inevitable set-closing Yellow Ledbetter with all their battle-hardened fervour; but one shudders to think as to the exact number of times they’ve played Alive, for instance. Easily in the thousands. It remains a cornerstone of their setlist after all, which sort of highlights the problem with the Pearl Jam of today.
Content to peddle out the classics across the globe, even writing their new songs for the arena setting to fit snugly and inoffensively alongside their older catalogue. They’re like the musical equivalent of a raggedy teddy, or an old couch. Reliable, comfortable, and you know exactly what you’re going to get. You could easily argue that they haven’t released a vital album since entering the new millennium, trading in the surprise of pushing themselves in new directions for being one of America’s hardest working acts. Well, so is Springsteen, but he still manages to consistently muster new material and still remain relevant.
It hardly matters, they’re very much the heirs apparent to The Rolling Stones. They’ll tour till their hair and teeth fall out, playing Even Flow night after night. For themselves, for the fans. And in the end, what could be more rock n roll in spirit than that?
stream Live On Ten Legs over at myspace
Posted by Al at 12:40 PM