Welcome to another year for Al's Music Rant, which as it turns out is now its fourth(!) in existence. No new year's resolutions here, except perhaps to maintain my own personal standard of quality. Which is to provide writing on music that is informative, well-researched and most importantly, passionate.

I've got a lot of bigger ideas ticking over from 2009 (which if you need a good summary, try the Top 15 Albums list), including an honourable mentions/best of the rest list. But to kick things off instead, we have a review of the Editor's performance last week at the Palace Theatre in Melbourne.

So without further ado.

Getting the crowd started were Big Scary, perhaps one of Melbourne’s best new acts, even if they’re still one of the town’s best-kept secrets. The correlation between their popularity and their quality is totally out-of-balance, but with this support slot: their biggest show and venue yet, perhaps the scales will tip more in their favour.

Sidling onstage is one-half of the band, Tom Iansek, unassumingly silencing the crowd with a wash of guitar chords and his impressive Jeff Buckley-esque falsetto. He’s soon joined by drummer Jo Syme, who in an impressive rolling drum solo leads the duo into the rocking Hey Somebody. The lead single for their forthcoming EP, all bristling with energy thanks to its stop-start dynamics and tempo changes. Though they are visibly (and only just audibly) nervous they soon find their feet with a string of up-beat rockers, namely Polly and Apple Song. Both demonstrate that once the group rev their engines they make a much broader sound than the sum of their two parts. Happy Helpless introduces Syme’s extra talents, harmonising and playing xylophone before Lullaby and a freshly minted song “written yesterday” offers a snaking riff reminiscent of Led Zeppelin. As the numbers pour in and the floor fills with people for the main act, Big Scary receive an ever-growing positive response. When they finish with the crashing chords of This Weight it’s safe to say that, despite their disparity musically speaking from Editors, their talent and energy has won them more than a few new fans. 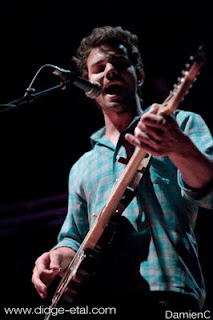 Where Editors previously struggled to shake comparisons to Joy Division, it seems with their compass now set in the direction of grandstanding electronics they will have to dodge another band’s shadow, namely Depeche Mode. Lanky frontman Tom Smith even vaguely resembles a younger David Gahan. Flanked by his similarly clad bandmates, all uniform black, he stalks the stage –often mouth agape, arms branchlike – lurching from mic to mic. As such his captivating presence confirms that Smith has evolved into a strong frontman. His enthusiasm matched by his strenuous enunciation and urgency on every syllable he sings. Accompanied by arching gestures and equally emphasised playing with energy to spare. If he’s tired of his songs after playing them so many times, he’s hiding it extremely well.

More captivating still is his rich baritone, perhaps the key entry point to Editors’ crowd-rallying appeal. Like the love child of Coldplay and Interpol, they tackle the ‘Big Themes’ - like Love and God – in gloomy histrionics and crowd-baiting anthems.

Even at a relatively young five years of touring, they’ve managed to command a strong reception at both headlining shows and the festival circuit. Generally thanks to the critical and commercial success of their first two albums, 2005’s The Back Room and 2007’s An End Has a Start, and particularly hit singles Munich, Bullets, Smokers Outside The Hospital Doors and Racing Rats.

Their latest album however, In This Light And On This Evening, sees them ditching their signature twin-guitar attack – all skyscraping riffs and skittering lines – for synths… banks and banks of synths. The keyboards and processed drums that go with it make a sound that while certainly starkly new sound for the band, it isn’t necessarily a better one.

While the newer material makes more sense in a live context, offsetting the nervous energy of their four to the floor anthems with cooler, slower moods, the reception to the newer songs is also occasionally just as frosty. 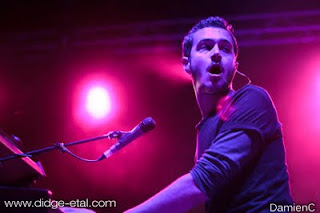 Chalk it up to a lack of familiarity, but every time the group trump up a new track, they retreat back to older, more familiar material to follow it. There’s almost an audible lull during The Boxer and The Big Exit until the pounding rhythm of Escape The Nest startles the audience back to life. Likewise the horribly titled Eat Raw Meat = Blood Drool receives some sporadic audience vibe for its industrial bounce, a seemingly good reaction until it’s followed by All Sparks whose crashing chorus confirms the entire Palace is now astir.

Exceptions to the rule however are a belting rendition of Papillion that fills the encore, and Bricks & Mortar closing the main set on a highlight, enrapturing the audience with its bluelight groove, all seven hypnotic minutes of it.

Time may well prove In This Light And On This Evening as a transitional album, the likes of You Don’t Know Love, The Boxer and the title track, have echoes of their original blueprint. Each morphing from a slow-burning front half to rocking closers, while consistently seeing the band dart from guitar to synths and back again. Still, whether flaunting their third album (the entirety of which is played during the course of the evening) or drawing from their impressive back catalogue, they rip into their playing with an equal amount of gusto. An energy equalled by the rabid fans.

Even against the rousing receptions that Racing Rats, Bullets and Blood receive, it is towards the tail-end of the set that Smokers Outside The Hospital gets the biggest response, hands-down. Its intro of pounding drums inciting near hysterical levels of cheering that quickly switches to an unprovoked anthemic sing-a-long from the crowd. Including, ironically one particular sozzled punter, who wails along to the chorus while dragging on a cigarette.

He is, however, merely one of a sea of people who Editors manage to unite into a fist-pumping, foot-stomping mass with their engaging anthems and yearning, every-man appeal.

On the strength of well-polished performances such as this one, it won’t be long till they graduate to the stadiums, allowing room to bloom their solid rock show into a spectacle with all the requisite flourishes. After all, Editors deserve a canvas as widescreen as their music. 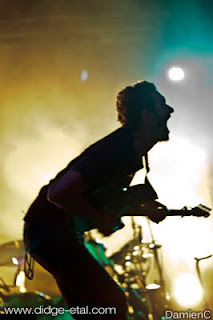 Here is a live performance of Papillon in both QuickTime and Windows formats;
as well as an accompanying video: