So summer's just around the corner and I for one cannot wait. Not least of all because it's festival season again, having already secured tickets for the Falls Festival I'm well excited. Also there's plenty of side-shows that'll be announced (or have been announced in the case of Animal Collective and Patrick Wolf) thanks to the stellar Meredith Musical Festival line-up. Just when things couldn't get any more exciting, along comes the Big Day Out line-up.
Personally, it reads like the live equivalent of an end-of-year best albums list:
The Decemberists - Colin Meloy's band of literate merry minstrels in their first trip to our shores, prog-folk ahoy!
The Temper Trap - back from slaying the UK, Sweet Disposition live: case closed!
Karnivool - always a great live act, but now with Sound Awake tunes!
and the incredible triple assault of the sci-fi prog titans:
Mastodon, The Mars Volta and of course headlining, Muse.
These names alone have my proverbial musical tastebuds well and truly whetted.
BDO tix go on sale at midnight tonight (if you're from Melbourne), so don't miss out.

What better way to calm yourself from the excitement than with a lovely review, enjoy: 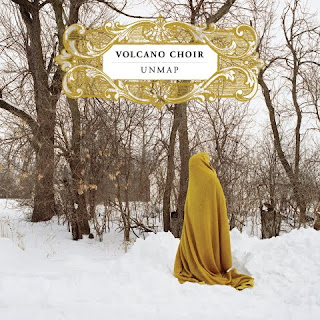 In 2008 Bon Iver’s For Emma, Forever Ago was an inescapable part of the musical landscape and easily one of the year’s best. A minor coup considering that the album was actually a reissue of an independent recording from Bon Iver aka Justin Vernon, a relatively unknown singer-songwriter. It’s almost mandatory at this point to mention the accompanying myth regarding the album, so let’s get that one out of the way now shall we? Man encounters emotional turmoil. Man isolates himself in wood cabin. Man emerges with powerful songs and hit-making album that catapults him to the forefront of music industry.

It’s almost an understatement to call For Emma a career-defining album that set a very high benchmark, as such it would have been easy for to follow his debut with more than his share of career hiccups and stumbles – it’s only natural. Instead he’s cleverly tempered the hype with smaller releases before the next proper outing under the Bon Iver name, there’s already been the Blood Bank EP and Vernon has spent time making all manner of indie friends, appearing on compilations and popping up on tour with a few contemporaries.

Deliberate career move or not, it’s a simple way for to stay in the public conscience without committing himself to facing down high expectations for future Bon Iver releases.

And now, there’s Volcano Choir, a collaboration between and his “favourite band,” Collections of Colonies of Bees, a six-piece musical collective as inspired by the minimalist composition of Steve Reich as much as mesmerising folk-noise. Apparently the two parties had already met nearly half a decade ago, but it took the sweep of Emma’s success to guarantee them time (and label backing) to produce a record. Unmap is the result, an album of evocative moods, avant-garde experimentalism and, yes, soul-trembling emotion.

There’s no real Skinny Love or Re: Stacks to be found here, but there was another moment on Emma that best indicates the direction taken here, the unsung Team. It’s no surprise that an instrumental segue should go unnoticed, but it’s this cut that best indicates the direction that has taken with this side-project. Specifically, rhythmic driven-instrumental music that’s as obsessed with melody and texture as it is with experimentalism, Unmap follows this same dogma.

Every composition seems to lure the listener in with its intriguing mix of organic and artificial sounds. Sometimes these instruments are identifiable - ringing guitars and softly pattered drums, at others they are totally unrecognisable, the sonic equivalents of skittering wires or yawning bells. As far as ’s uniquely emotive falsetto goes, for the most part it’s just another layer in the overall texture. An excellent example being the ebb and flow of Sleepymouth; its near-seven minute existence building from calm alt-folk echoes to a barrelling rhythmic climax. Following is Island, IS which feels more like a Bon Iver-style song that’s been put through an experimental filter, with the processed guitars setting and haunting background mode switched to full.

From here the album never dips in quality and at only nine tracks, it never feels like a stretch. As such, each track is given full emphasis to show off its individual moods. Dote is a shot of breathy ambience, And Gather uses cut-and-paste guitars, hand-claps, and non-sensical vocal harmonies to lilting effect. Mbira In The Morass is as unapologetically avant garde as it’s title would suggest, with ’s falsetto closely resembling Thom Yorke, with equally paranoid lyrics “wild dogs around me howl.” Cool Knowledge is a musical transition as enjoyable as it is brief. The penultimate track however, Still is the undisputed highlight, remarkably taking Bon Iver’s already excellent auto-tune acapella-based Woods and giving it a full band make-over (as well as a name change). The results are nothing short of stunning.

Closing Unmap out is Youlogy, featuring a beautiful gospel-tinged melody nearly completely undermined by a high-pitched dissonant drone, the tension rising until it is slowly calmed by a wash of vocal harmonies.

Volcano Choir proves an interesting diversion for both parties involved, and while it is an obvious sonic equation of the two artists’ efforts, it doesn’t take away from eithers abilities. Collection of Colonies of Bees have brought plenty to the table in terms of dishing out folk-tinged but unmistakably minimalist compositions that enrapture and engage over multiple listens, but the album proves positive particularly for Justin Vernon. Those worried that For Emma was a fluke, a one-off moment of serendipity, needn’t worry. Unmap proves that there are plenty of artistic curiosities and yearnings to . Whether that means he takes the time to chase down these musical tangents, or simply going back to that wood cabin to try and evoke the spirit of For Emma again – the results will be of a high quality.

and a video for Still via my buddy Dan's blog (one good plug deserves another).