This live review was origially written for, and published, by the folks at ToneDeaf, the edited version is available on-line here, while the following is a full 'director's cut' edit. Enjoy. 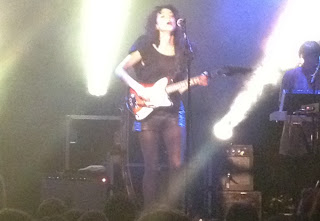 The crowd, beset by a field of summer frocks and skinny jeans, was already brimming by the time Melbourne’s own Minibikes opened the bill with some polished hooks. A five-piece playing straight-up indie pop, the vibrant likes of Kill To Feel touched with a soft spot for boy-girl harmonies between singer Marcel Borrack and keys lass Libby Chow. Their mood is sprightly if not distinctive, but there’s far worse things than being likable at this stage of a career.
Fire, Santa Rosa, Fire! soon grace the stage, and those familiar with the Adeladians’ previous work will notice that this is a group in transition. Though there’s room for the vicious hi-hat rolls and agitated hooks of Little Cowboys, Bad Hombres, their newer material instead shifts from the angular towards the atmospheric. Washing their restless pop hooks in spacious swirls with a new focus to vocalist Caitlin Duff’s enigmatic croon. Newer cuts, including a self-described ‘slow-burn’ and galvanising single Panther Shrine shows them playing to their inventive, and technical, side. Centered around hypnotic guitar loops and octave-hopping bass that spiral into cathartic grooves. After tonight’s showing, they’re sure to pick up a few followers on their own measured march towards their sophomore album.
Their left-field pop is fitting support to a lady who’s mastered the field, having famously earned her stripes with the likes of The Polyphonic Spree and Sufjan Stevens, Annie Clark – the brains behind St. Vincent – possesses a live show fitting of her expansive albums.
With a  new line-up of dual synth wielders and drummer Matt Johnson (yes, the Jeff Buckley/Rufus Wainwright sticksman trainspotters), the focus is clearly on Ms. Clark. The impressive lighting tells us as much, inky blacks and smoky, coloured spots all emphasise her demure silhouette. Rocking leather hot pants and a charcoal top with elaborately floral shoulders, she opens with the delectably unhinged mechanics of Surgeon.

Perhaps the most succinct realisation of the musical contrasts she’s been honing thus far, Surgeon juxtaposes  idyllic, sawing synths with simple, melodic repetition (“get along, get along,”) while Clark’s skating guitar lines circle in a nervy loop that eventually engulfs the track. In its break-down, it sounds like the proverbial Stepford Wife malfunctioning to simply break free of her hem-tied surroundings.
It’s a powerful opening, quickly establishing that Clark is not only an imaginative composer, but also a ferocious guitar player. Scratching and slashing away at her strings, her bank of pedals voice her axe with a buzz on Actor Out Of Work, crunching and bruised for Cheerleader, or a dense sci-fi grind on Marrow. She’s particularly violent to her fretboard during an electric Save Me From What I Want, but her channelled intensity reaches a head when her amp starts stuttering during NeuteredFruit. With a burst of verbal aggression, she gives it a good throttle before hurling herself into an especially grizzled bout of shredding.
The set is not without its setbacks however, Clark seems visibly frustrated,  making irritated gestures to have volumes changed through the evening and even professionally fluffing her way through, not one, but two false starts of Dilettante. It’s not until a throbbing rendition of Chloe In The Afternoon that things begin to gel smoothly, from there out though, she’s in command.
Though usually portrayed, with her cascading curls and doll-like eyes, as a demure, softly-spoken lass, Clark is unafraid to embrace the darker elements to her personality. It’s what charges her fascinating music, a carefully plotted choreography of contradictions. Her baroque arrangements vie for fey synth-laden pop but then her lacerating guitar cuts angles across it. This struggle between the fair and the fierce is all the more visceral in the live setting, even her most dissonant squalor voices her sordid tales of suburban housewives and cryptically abusive relationships with cruel precision.
There’s filmic references to her sounds too, like the aural equivalent of David Lynch’s surrealism. The windswept opening of Cruel, for instance,  suggests the soundtrack to a Douglas Sirk weepie, but then mutates into an afro-pop trot of gagging guitar and chunky keys. It also justifiably receives the first all-out sing-a-long of the night.
Following with the sighing Champagne Year, it proves another deft juxtaposition, between her most danceable track and her most relaxed, as she coos “I make a living out of telling people what they want to hear/it’s not a killing, but it’s enough to keep the cobwebs clear,” it demonstrates a rare moment of gorgeous restraint. At the other end of the spectrum is the unveiling of brand new track Crocodile. Beginning on her knees on-stage, Clark then launches herself unexpectedly into the pit, even the most fawning of male fans don’t seem to know what to do as she pinballs between punters as she semi-screams her words against pedalling keyboards and restless rhythms.
Returning to the stage to rapturous applause, she continues to pepper her setlist with equally theatrical highlights. A searing cover of The Pop Group’s She Is Beyond Good And Evil, a theremin – lying tantalisingly unused throughout – gets a workout during the charging NorthernLights; while Year of the Tiger finishes her main set with hypnotising aplomb. She returns to perform The Party, guitar-less, she sings with the solo backing of Daniel Mintseris. A showcase for the enchanting abilities of her choral register, as it rises in gorgeous refrain. But as if to remind that she’s more than a (extremely pretty) voice, she finishes with the monstrous punch of Your Lips Are Red. Clark can certainly play beautiful when she fancies it, but it’s not nearly as interesting was when she plays rough.
Posted by Al at 4:17 PM