Review: The Trouble With Templeton - Bleeders 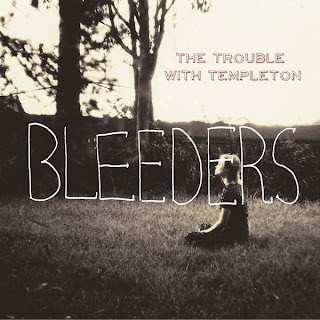 It seems that musical prodigies are almost de rigueur in the Australian music landscape these days, thanks to the spotlighting of the likes of triple j Unearthed and their focus on young, unsigned talent –there’s a fair few musical kids out there whose talent outstrips their years.
That being said, how many can you name who, at the ripe age of twenty one, are delivering chilling troubadour ruminations worthy of the UK’s rich folk heritage? Enter one Thomas Calder, operating under the Twilight Zone name-checking The Trouble With Templeton. Despite hailing from the typically sunny Brisbane, his sincere grain and earnest guitar-plucking are closer to a chilly English sensibility of moody folk.


In fact, if someone had told me that The Trouble With Templeton’s Bleeders was actually a lost album from the nineties boom of UK singer-songwriters - I’d have had no trouble believing it. In fact, tell someone it’s the new record from the lesser-known (but brilliant) Tom McRae, and they wouldn’t even blink. It’s mature sound traces a line straight back to England’s criminally underrated singer-songwriters the likes of Ed Harcourt, Stephen Fretwell or – at a stretch – Damien Rice.
Even if these names are drawing a blank, there’s plenty more to TTWT (cool anagram bro) than a re-enacted musical history lesson. It’s writ large in the record’s title track and lead single: a spine-chilling melodrama that perfectly spearheads Calder’s ambition and thrilling voice. Replete with asuitably macabre video filled with gothic affectations. For better or worse, it easily remains the record’s watershed moment. Though the remainder of his debut matches the song’s mood, namely hushed melancholy that surges into a barely-contained brooding intensity, it fails to match its epic scope.
Luckily, Calder’s sharp lyricism and wealth of ideas carry the songs when their stripped-back or thin production occasionally falter them. I Wrote A Novel squeezes vocal breathing for a rhythm track alongside writerly couplets , “I wrote a novel about it/grammatically it’s full of holes. My speciality has never been/knowing where them commas go.” Someday Soon follows with a mournful gospel procession underpinning the ravaged soulful croon and simple guitar strides. 30 Something even manages to entertain some doo-wop with some twee results (and cheeky lyrics: “I’m happy, feeling crappy/with what I don’t do/how about you?).
Finishing with the bruised Tired, the impacting mood is often melancholic - comfortable in its vulnerability - but ultimately cathartic and brimming with potential. If The Trouble With Templeton is the impressive stockpile of Calder’s ideas, then Bleeders is the often impressive, occasionally brilliant debut attempt at executing them. If he can produce this kind of world-weary acoustic revelry in his youth, it’ll be fascinating to see where the bruised experience of time (or some broken hearts) will take him creatively. Definitely one to watch.
Posted by Al at 1:15 AM

Email ThisBlogThis!Share to TwitterShare to FacebookShare to Pinterest
Labels: review, The Trouble With Templeton