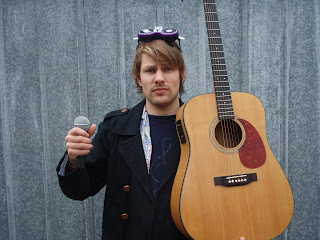 As the fresh lick o' paint should no doubt tip you off, Al's Music Rant is slowly making a buttefly-like transformation. Emerging from the cult scribblings of one dillettante writer, to burst forth from its coccoon into a solo live show featuring that berk with the guitar and finger deck goggles you see above. There will be laughs, there will be pretension and above all there will be music... sweet music.

But until then we will return to our regular programming.


It feels like an age since I attempted a thematic list, and in fact it has - all the way back to my playlist for Father's Day back in '09 - but these things are only fun if I can manage to scrape together more than three songs for cohesion. That, or there's too many bloody songs to choose from, but the following little collection is tidy and cohesive as a good thematic list should be.

SONGS THAT SPELL OUT WORDS
If that rather clunky title didn't spell it out for you (see what I did there?), here's a list that corrals all those tunes that, for one reason or another, put regular songwriting techniques on hold to spell something out. It's usually for different, if very vague, purposes but what ties them altogether is that strange effect it has on the song, making for a unique stamp that makes for some memorable moments, what is Village People for instance if not Y-M-C-A (and no... that's not included here).
Kele - Tenderoni
The lead single for the Bloc Party frontman's solo foray into 'going electro.' Dropping his surname for the more casual Kele, the associated albumThe Boxer finds a physically leaner, buffer Okereke diving wholeheartedly into the ring of 'proper' dance and electronic music.
The lead single Tenderoni is a decidedly love-it-or-hate-it affair,
That word still makes me think of a meat-based pasta dish (in actual fact it's slang for one's younger love interest), but even without that strange association it's a bizarre thing to spell out.

Arctic Monkeys - Dangerous Animals
Not exactly the best track on perhaps the Arctics' least favoured album, but still it's intoxicating to hear Alex Turner speed through that spelling at breakneck speed and the whole stoner rock vibe (courtesy of QOTSA's Josh Homme) certainly adds to the S&M shenanigans hinted at in the lyrics: "Sharpening the heel in your boot/and you press it in my chest and you make me wheeze/Then to my knees you do promote me." Kinky.


Aretha Franklin - Respect
Do we really need to analyse the classics? ....No, didn't think so. Sing it again!

The clue's in the title. A no-brainer party starter, with its none too subtle MJ references and a killer intro: like a radio being tuned to the sound of kids chanting before dropping a sonic boom up in your grill. It goes without saying that the super groovy beat was the hook, but those non-sensical lyrics just made so much... welll... sense.


Gwen Stefani - Hollaback Girl
Supposedly inspired by an offhand remark from Courtney Love mocking Stefani as merely a cheerleader, she responded in kind with the demented chanting of this bizarre single. It featured a hollow, clunky Neptunes-produced beat, a high-school lyrical setting and even a snippet of Queen's Another One Bites The Dust. B.A.N.A.N.A.S. indeed.

Hot Chip - Over & Over
Hot Chip are just one of those bands I should like, but I just cannot get into. Over & Over being the chief offender, I just find it annoyingly repetitive. 'Oh, but that's the point' I am told time and again; Really? Just because you're mocking something (in this case repetitive monotony) doesn't mean you have to mimic it (in this case... repetitive monotony). And just what are they spelling out? K I S S I N G S E X Y. C A S I O. YOU. ME. I.
Yeah, I don't really know either.

XTC - Your Dictionary
Taken from the latter days of XTC's career, Your Dictionary offers up a bevy of spelt-out words in their acerbic swipe at some nasty character, the hook being that nasty words like HATE, KICK and the F-Bomb all substitute for general niceties. A little mawkish but the resulting effect still works.

They Might Be Giants - SEXXY
TMBG always flit confidently between genres, but never has such a funky track been so aptly named. It's particularly delicious in a live context, all parping horns and wah-wah guitar with just the right amount of tongue-in-cheek. Whether its yours or someone else's cheek is up to you. And as the song goes, that extra X is "cause it's extra baby, Y? cause it's extra baby." Genius.


Prince - Diamonds & Pearls
Bit of a cheat this one, as it potentially opens the floodgates on a whole spate of rap and hip-hop. The soul breakdown, from the busty diaphraghm of Rosie Gaines, goes "D to the I to the A to the M/O to the N to the D to the pearls of love." It's catchy as hell, but if this kind of effect is allowed then I could have conceivably included Jay-Z's entire back catalogue (H to the izz-O, V to the izz-A etc. etc.) but whose to say he didn't nick it from the Purple One to begin with? mmmm, food for thought...


Them & Van Morrison - Gloria
Who knew that when 'Van The Man' would growl his way through those syllables that it would become an iconic part of rock-n-roll history. The G-L-O-R-I-A chant has been referenced time and again in pop culture, but some of my particularly favourite call-outs are Patti Smith's drastically reworked version for her seminal Horses album and the Red Hot Chili Peppers' Venice Queen. Still, it's hard to fault Morrison's barking teenage lust in the original.