Unify and watch our flag ascend

First things first, I'm still thrilled about the fact that Porcupine Tree themselves added my humble little interview with Steven Wilson to their news feed. So, if you haven't read it yet, please do: here.

While I'm on the plugging bandwagon, I may as well mention my Beat reviews over at their website. Specifically my recent takes on new albums from The Mars Volta, The Melodics and my featured album-of-the-week review of Paul Dempsey's Everything Is True. Also a live review of Ben Folds gig at the Palais a few weeks back. Read away Mr. McManus, read away.

Right, now if that wasn't enough for you, on to the main body, which I will warn you right now is as unapologetically epic and long as it's subject. I'm taking about my review of the highly-anticipated new Muse album, The Resistance. phew, deep breaths people. 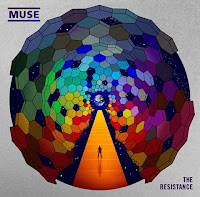 Early assumptions (including mine) were that this was to be Muse’s most progressive influenced (and sounding) set, it was easy to find points of reference in the two singles that preceded the album, namely Uprising with its Blondie Call Me shouts and Dr. Who Theremin and jokes that United States of Eurasia was the new Queen single. A glance at the tracklist also revealed a three part symphony that capped off the album’s running order. The results however are not as insane as early signs indicated.

Though far from disappointing, when it comes down to it, this is almost Black Holes and Revelations Part II, and that is in no way meant as a snide insult. Even if there’s no breaking down of any boundaries that had been previously obliterated, there’s still an expected evolution from the previous album’s sound. Besides, even by the musical yardstick that is used to measure lesser bands, Muse really are, fittingly, on another planet. Even if they haven’t raised the bar much higher with The Resistance, their big ideas – large in sound and ambition – still dwarf their contemporaries. The greatest part being that they will pursue any endeavour without fear of failure or ridicule. Recall the uproarious United States of Eurasia to herald their new album. It squeezes in piano balladry, arena rock harmonies, scintillating guitars, some Middle Eastern influenced romantic symphonic, quotations of Chopin and even the sound of a passing jet fighter. No other band would even dream up such a creation, let alone dare release it as an album taster. Muse however is working with musical blueprints of a far grander scale, and for this album they use all manner of sonic architecture to construct them. 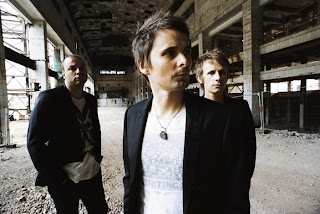 The Resistance finds Muse focusing more on their atmospheric and electronic side than out and out rock numbers. Where previous albums found a consistent approach to production techniques, such as the grunge meets symphony attitude of Origin Of Symmetry or the heavy-metal meets baroque of Absolution; The Resistance finds the band experimenting with different genres and then finding production conducive to that style. As such, there’s the glam-rock track (Uprising) the electro R&B number (Undisclosed Desires) the cock-rock arena ballad (Guiding Light) and of course the three-part symphony. As a result, it’s Muse’s most eclectic set yet. And that’s saying a lot for a band for whom ‘being eclectic’ is probably pretty high on the list of priorities.

Thematically speaking the album picks straight up from where Knights of Cydonia left off with Uprising, a song about ‘control’ – or the lack of it – a term that continues throughout the record. Lyrically, it takes its cues from the incendiary political themes of Assassin and Exo-Politics but it is perhaps Bellamy’s most concise statement of intent regarding rebellion and revolution. “Another promise another seed/another packaged lie to keep us trapped in greed/and all the green belts wrapped around our minds/and endless red tape to keep the truth confined.”

It may come as an ironic surprise that newly informing Bellamy was George Orwell’s timeless tome, 1984. A surprise because Orwell’s paranoid sci-fi vision of a controlled society is synonymous with Bellamy’s already. Nevertheless, Uprising sets the lyrical template of the album, it’s the age old ‘us’ vs. ‘them’ – neither are particularly well defined, but its important to note that Bellamy rarely uses ‘I’ in his musical vernacular. The togetherness of his lyrics matched by the huge arena sized football chants that first appear on Uprising and re-emerge throughout the album. A mood continued in the title track, which features a brilliant call-and-response chorus (It could be wrong, could be wrong). Building from a soundtrack-worthy atmosphere – sawing keys and epic drums – the track reaches the aforementioned chorus and grinds through naggingly catchy chord changes as Bellamy’s yearning becomes ever more tangible. It also highlights the other theme that permeates the album – romance, the words tying the album's twin themes tidily together "Love is our Resistance."

Where previously Bellamy dealt with lust (think Plug In Baby, Hysteria et al.) it seems his newly settled relationship (with Italian model Gaia Polloni) has found him following his romantic streak further. Generally it suits him, even on the eighties influenced Guiding Light, this album’s Invincible. Namely, an epic, up-beat ballad that contains powerfully primal drums and bass as well as a tasteful guitar solo. Elsewhere there’s the dark Undisclosed Desires, a stripped-back track featuring drum loops and keyboard strings, that – stripped of guitar and piano – feels more like a modern R&B number. Even if its lyrics are more complicated, “I want to reconcile the violence from your past/I want to recognise your beauty’s not just a mask.” Fear not, it works, and even sounds a little like Pure Reason Revolution’s newly minted prog-electronica. 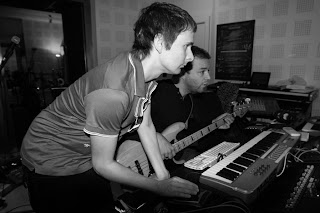 For all the romantic dips and swoons there’s some blistering rockers on offer too to keep the headbangers happy, in the form of Unnatural Selection and MK Ultra. The former instantly ranks as one of Muse’s best songs, reintroducing the riffage from New Born and supplants it with a free-form section that allows the group to go a little bit experimental, Mars Volta style. MK Ultra meanwhile offers a corker of an opening, riding an arpeggiated riff, before diving head-first into some sci-fi rock.

Most important to note is that this is also Muse’s most unapologetically Classical set. There are direct quotations of both Chopin and Saint-Saens, as well as the usually baroque influenced chord structures, but most obviously in the brilliant Exogenesis symphony. The three-movement concerto that ends the album is easily one of the group’s greatest achievements thus far. As much as the band’s synergy – driven by the bass and drum work of Chris Wolstenholme and Dominic Howard respectively - is key to the Muse experience, this is Bellamy’s time to dazzle. It’s not really worth trying to articulate the sumptuous delights of its complexity, only know that it’s emotional ups and downs track a mini-narrative all of its own, and while its charms won’t be immediate – it’s such a stylistic shift from what’s come before – they will reveal and reward themselves given time. It’s a hugely ambitious and risky move that pays dividends, even if the majority of The Resistance wastes no time in attempting to carve a wider audience for Muse, even the doubters should check out Exogenesis, it’s that good.

The album’s greatest point of indulgence however has to be I Belong To You, it doesn’t so much cross the line as bust a jig on it before performing stupendous acrobatics well beyond it. Built on a knees-up piano bounce and preposterous couplets such as “She attacks me like a Leo/when my heart is split like Rio” it only gets more and more ridiculous: crooning in French, grand piano swells that lead into sampling some opera, namely Saint Saens’ Samson and Delilah (Rufus Wainwright would be proud) and just when you think the band have done it all, they throw in the proverbial kitchen sink – or in this case a bass clarinet solo. Outrageous.

It’s a microcosm for Muse’s appeal though, sure it treads heartily on the borders of excess and wraps on the door of silliness on more occasions than previous albums, but you really wouldn’t want them any other way. Though The Resistance contains moments that make the likes of Butterflies and Hurricanes or Knights of Cydonia look positively dull it doesn’t always equate to a better listening experience.

Here’s the bottom line: It’s not their best album, though it contains some excellent moments, but it’s more a consolidation of their abilities so far and a thrilling taste of any one of the musical directions to which messrs Bellamy, Howard and Wolstenholme can commit themselves to next. Will it be electronically tempered dance rock? Perhaps heavy metal prog rock meets glam pop? Or even the full-on classical inclinations of a full blown symphony or opera? The brilliance of Muse is that they’ve created and now inhabit their own musical universe where they can satisfy any and all of their musical curiosities.

It’s their world – we just have the pleasure of visiting it. 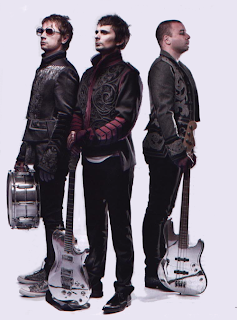