Ahhh that punnage title refers to the fact that for this post i'll be upping an old review that has yet to see the light of day for one reason or another (probably cause it's a bit scathing). Lazy i know, but I'd rather do that than spend another week agonising over some sort of thematic playlist to do (which will come soon). In the meantime... 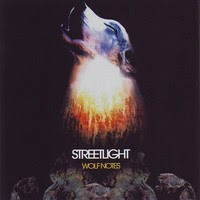 Though it would be unfair to single out based Streetlight - pinning upon them the mistakes of a whole wave of bands slipping into the same pitfalls – they are certainly an accurate specimen. Though their tunes are competent enough in production, writing and performance, they are also unfortunately derivative. Wolf Notes seems to be lacking in that special something, the ‘x factor’ if you will.

The EP is spearheaded by the muscular lead single, Watch The Empire Fall which offers vague prophetic imagery which ironically highlights the band’s own shortcomings “I feel the soul of this generation/I’m like a child growing up in a storm” against a backdrop of buzzing guitars and tub thumping drums.

The rest of Wolf Notes provides little variation to the formula. Red Sunrise could have been written by any band with a grasp of drama and a studio budget, while A Fast Way To Slow Down uses a back beat that ensnares the dance rock demographic.

Final cut starts off promisingly with some country-tinged acoustics and even a bit of slide guitar in the mix, but soon settles into the same generic mix of aggressive rock with cocksure shouty vocals that the previous five tracks mined.

Anthemic and powerful are certainly within the band’s vernacular, but subtlety and dynamism seem yet to be defined in their book. From its edgy(ish) artwork right down to the group’s radio friendly track lengths Wolf Notes seems to furrow a deeply generic mindset; one that will ensure them airplay on commercial radio but little longevity.

To be fair, there’s nothing particularly bad about Streetlight but there’s nothing exciting or distinctive about them either. Wolf Notes may well be the sound of a group developing, but at this rate they are unlikely to become your new favourite band.


Have a listen for yourself:
Streetlight MySpace
...and decide for yourself if i'm being unfair.

If you're after something a bit more upbeat (ahhh, more puns!) check out my Beat magazine reveiw of Easy Star All-Stars' latest album here.
For those of you who don't know Easy Star All-Stars are a group who tackle classic albums in reggae-fied fashion. S'pretty cool.

Till a more fruitful excursion, I remain your humble writer.