It's not boring... It's consistent!

I had some rather ambitious ‘Most Anitcipated Albums of ‘09’ list cooked up but it seemed a little silly, as one of the albums of the year fell into my lap (courtesy of Beat magazine). While this is technically doubling up, I think it’s too great a record to receive too much attention.

(EDIT: So it turns out not only was my review published in Beat, but it was made CD Of The Week, which means it got up onto Beat's website! Hooray!)

The album cover for Akron/Family’s latest is a raggedy, tie-dyed rendition of the American flag. It’s a fitting image, as the band’s music is a skewed version of . Like fellow nationals Wilco or a loose-limbed Flaming Lips, their latest finds the group exploring and experimenting new sounds without aggravating the listener.

It might, however, come as a shock to anyone who familiarised themselves with Akron/Family through 2007’s Love Is Simple.

Set Em Wild, Set ‘Em Free could be the work of an entirely new band and it marks a turning point in Akron/Family’s career, displaying not only a new liberation and innovation but, it is also an album of ‘firsts’. Their first as a three-piece after the departure of founding member Ryan Vanderhoof, their first for a new label (Dead Oceans) and their first self-produced record.

They are not alone however, accompanied by a small buffet of horns, woodwind and strings that not only complements their core arrangements but enabling the grander visions on offer here.

Here is a band that treats songs like ideas, not just another name to put on the set list - and it shows. It’s almost impossible to predict where the album is headed next, as it splays its way from one musical spectrum to the next offering a bevy of delightful surprises (as well as surprising delights) along the way.

The album opens with the Afrobeat influenced Everyone Is Guilty and River . Two cuts that are proof that Vampire Weekend aren’t the only ones who have given Paul Simon’s another spin recently. The former starts with an incessant groove before teetering into cyclic guitar patterns and multi-tracked chanting reminiscent of Yeasayer, River however takes a similar blueprint but blooms into a lilting anthem.

The territory suddenly shifts with the experimental drones of Creatures and then a harmonica on the opening of The Alps & Their Orange Evergreen introduces a more traditional folk/alt-country sound; a sound that follows for the (semi)title track Set ‘Em Free, Pt 1.

Then there’s the rollicking epic that is Gravelly Mountains of the Moon, beginning with docile flutes, then a lurching horn ensemble, before exploding into a full blown psych-rock wig out. Following the lush Many Ghosts comes the burst of aggressive static that is MBF. The elegiac They Will Appear winds the record down to the finish, followed by the warm paean of Sun Will Shine transforming into a drunken bluster of horns.

The final track Last Year finishes with a chorus framed against a simple piano pattern, repeatedly singing “Last year was a hard year for such a long time/ This year is gonna be ours”

If Set ‘Em Wild, Set ‘Em Free reaches enough ears yearning for new music, then 2009 is most certainly theirs.

Stream Everyone Is Guilty from the band’s MySpace

P.S. Seems I wasn’t the only writer who noticed the whole album artwork analogy, it either shows that great minds think alike – or a complete lack of ideas amongst the music press…

The Line Of Best Fit Review 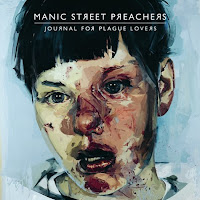 An original founding member, he was the band’s key songwriter and controversy magnet until he famously up and disappeared in February 1995, now missing presumed dead. It’s a tragic story, but the remaining members – James Dean Bradfield, Nicky Wire and Sean Moore - overcame adversity and delivered one of rock’s triumphant comebacks in the form of 1996’ Everything Must Go. They then rode a series of patchy but doggedly determined albums until the career slump of Lifeblood. It risked finishing the group off until they pulled a stunning turn-around with the commercially and critically viable Send Away The Tigers.

The key point being that by this time it seemed everyone – including the band themselves – had respectfully laid Edwards’ legacy to rest. But here they go picking at old scabs and reminding everyone again.

Tribute or no, it’s a regressive move. Send Away The Tigers introduced the Manics to a new generation of (younger) fans; even NME magazine – the mouthpiece of the fickle youth – crowning them with the ‘Godlike Geniuses’ award

It’s a gamble then to assume that their newer fans will follow them on their journey back to their political art roots. It’s as if they want to show the new bloods their tragic history.

It’ll surely be a thrill for long term Manics fans. Journal For Plague Lovers finds them returning to the rougher edges of their earlier work, complete with raw production from Steve Albini and Dave Eringa, complete with the same acerbic poet laureate vernacular and sampled philosophical recordings of their earlier records. It’s as if Journal For Plauge Lovers follows an imaginary timeline where everything after 1994’s The Holy Bible never happened. Which implies an awful bit of wish fulfillment – that Richey Edwards never disappeared. Aesthetically speaking, not much has changed but it’s strange that MSP should choose this point, when their stock hasn’t been higher than their mid nineties glory days, to choose to make a record like this.

The whole affair feels like a step backwards, after all this is what Send Away The Tigers did so well, blanketing it’s barbed social commentary in enjoyable guitar anthems laden with just enough hooks to generate a sing-a-long. It’s hard to imagine anyone singing along to wordy refrains like, “Oh the joy/Me and Stephen Hawking we laugh/We missed the sex revolution/When we failed the physical” (Me And Stephen Hawking).

In the end that’s very Manic Street Preachers. Why coast on the success with a Send Away The Tigers Part II when you can flick a big V sign at everyone and make it hard on yourselves?

Could it be the Manics were simply out of ideas? Surely they have too much love and respect for their fallen comrade to plunder his journals for the purposes of shortening their record contract. No, perhaps this is the final exorcism they need before they can finally move on.

Journal For Plague Lovers isn’t a bad record, it isn’t as bloated or creatively lean as 2004’s Lifeblood, but it’s certainly an act of willful rebellion, which is probably a fitting tribute to their old figurehead. After all here’s a band whose opening mission statement was an album called Generation Terrorists, and in that regard they’re still kicking and screaming twenty years after their birth.

A brief taste of Peeled Apples on the band’s MySpace

Hopefully that’s inspired you to check out some great new music.

Also, be sure to check out my mate Sean’s brand spanking new blog: Sonic Sandwiches

Also avert your browsers back to NobodyMove! as it finally lurches back to life