Sweet Mutation (aka Since We've Been Conditioned)

I'm still smarting a bit from the death of the king, but luckily i've had some great new music (and a copy of HIStory) on hand to get me through.

Few Australian bands have built a more effective buzz around the release of their debut album as The Temper Trap has. Thanks to a series of key supporting act slots (with the likes of Cold War Kids and Franz Ferdinand), through to some headlining gigs and a slow drip of singles through the course of the previous year, the best of all being Sweet Disposition.A song so good it seemed impossible that a group could top it. Further, it risked casting them as one-hit wonders.

At face value, Conditions doesn’t contain anything as resplendid as Sweet Disposition, but then how could it? Thankfully, The Temper Trap know it and avoid spending the record slavishly attempting to bottle lightning a second time (though Fools comes perilously close).

More importantly, Conditions is an album that justifies the hype. It’s confident, strident in parts even, each track given space and texture instead of being ramshackled into a radio-friendly accessible shape. Though there are some sure fire hits on offer too. No, instead The Temper Trap follow their own muse, with one eye on thoughtful, earnest rock and the other on populist, well-pointed songs.

The most striking element is Abby Rai Chrisna Mandagi (or just Dougy for short)’s vocals – a powerfully engaging falsetto that sounds like an edgier Prince, or more relevantly Tunde Abimpe of TV On The Radio. Either way, it demands attention and provides engagement, even lifting an overly simple mood piece like Rest to a whole other level.

Certainly it is this voice that guides the listener through both bold-faced hits (Love Lost, Fader, Rest) with a depth of feeling while providing the transient point for more experimental fare.

The first of which, , has the pounding affirmation of The Arcade Fire in full anthemic flight, urging you to join in the march to “take a chance on something.” Immediately following is Soldier On, a slow-burning number that initially focuses on Dougy’s lonely voice against a gently strummed guitar before lighting a slow fireworks display of echoing guitars and looming drums. Later Ressurection stretches the group’s sound to a dark, gloomy dub with the voice as the only guiding light.

For every track like Science of Fear that rings with a darker edge, there’s another to counter-balance it, such as the gleeful pop of Fader. At ten tracks there’s plenty of attention given to each song, even the near-perfect Sweet Disposition manages to avoid casting a looming shadow over proceedings.

All in all, Conditions manages to fulfil on much of the promise The Temper Trap first made. Honest, affecting rock that doesn’t need a gimmick to get on the cool list, nor pandering to hipster stereotypes in order to keep from getting booted from it. It’s a measured and impressive debut, by any standards, whose faults only reveal room for growth – not deep seeded flaws. It is also executed with such casual grace that they’ll become easy targets for cynics and naysayers.

Following the album’s release The Temper Trap decamped to in a hope to establish a foothold in their music scene, here’s betting they simply re-create the game plan of Conditions.

Click here for an audio stream of the album

or simply check out their MySpace for a smattering of singles 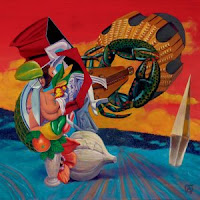 Rarely do artists so accurately provide a self-reflective assessment as when Mars Volta frontman Bixler-Zavala stated prior to the release of their fifth studio album, “It’s our version of what we consider an acoustic album.” Indeed Octahedron is not strictly ‘unplugged’ – but in spirit and tone it is most certainly an acoustic album. Bixler-Zavala further explains “That’s what our band does – celebrate mutations.”

If this is the case then Octahedron is a most interesting genetic strand, in striking contrast to the titanic progressive rock of their previous records. Where previously The Mars Volta have been described as ‘electric’, ‘epic’ and ‘powerful’, rarely have adjectives such as ‘beautiful’, ‘melancholic’ or ‘plaintive’ surfaced in describing their work. There is simply no other way to describe new tracks such as Since We’ve Been Wrong, With Twilight As My Guide or Copernicus.

Off-setting the lucid moments are cuts such as Cotopaxi, Teflon and Desperate Graves, direct evolutions from the boiling pot rock of Bedlam In Goliath (2008), but for the most part the album is stripped back to key elements; Namely, Omar Rodriguez-Lopez’ guitar arrangements and Cedric Bixler-Zavala’s vocals. Both provide fusions that are their most forthright and precise since their debut, Bixler-Zavala’s lyrics in particular are some of his most direct in, well… ever actually.

Certainly there’s still an encyclopaedia of surreal, borderline nonsensical, imagery on offer that is Bixler-Zavala’s ground zero territory, but it’s counterpointed by some truly straightforward poetry accompanied by affecting performances.

The album opens with the melancholic Since We’ve Been Wrong in which multi-tracked harmonies sway against a pattern of acoustic guitars, setting a pace and tone for the record. Halfway through the track, the rest of the band arrives on drummer Thomas Prigden’s elegantly simple drum fill. It should be noted that although the rest of the band’s contributions are kept to a minimum, they are no less important. Keyobardist Isaih Ikey Owens provides texture and melodic counterpoint, while Juan Alderete de la Pena’s bass keeps the rockier tracks chugging along. Besides, by maintaining a pattern that alternates between quieter, introspective tracks and the more propellant cuts, it emphasises the synergy of the full Mars Volta palette. The eight tracks flow with vibrancy and cohesion manifested by a barely-audible organ drone that reappears across the record.

Any concerns long-term fans have should be checked at the door, the appeal of The Mars Volta has always been in their explorations and combinations of disparate genres and ideas into a single, pulsing beast. Octahedron is best thought of as a journey into yet another unique musical landscape.

It may not be their best record, but in a strange way it is perhaps their most daring. While they have always been adventurous and almost impossibly creative, Octahderon ignites a different kind of creative spark. One that may actually appeal to a different, wider audience who found their previous excursions inaccessible.

It’s a very different sounding Mars Volta but one that is familiar too, in short Octahedron is a mutation, and that’s what the band does – celebrate mutations.

You can hear tracks at the band's MySpace;