Just a quick review today my dears, lots of Beat to do... including an interview with Biffy Clyro's Simon Neil, which will get an airing first but until then jump right in and gorge away. 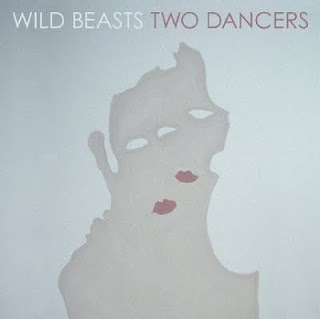 You’ll know if Wild Beasts are your kind of thing within the first minute of Two Dancers. It’s all down to whether you can appreciate the acrobatic falsetto of front-man Hayden Thorpe. No sooner has the organ and deftly-plucked guitars given way to a shimmering groove than we hear Thorpe’s idiosyncratic voice, one that’s both shrill and cooing recalling Kate Bush’s vocal gymnastics or – depending on your musical tastes - a cat being strangled. What may be surprising to new-comers is that his vocals have actually been pared back for this album, singing duties now shared between Thorpe and bassist Tom Fleming. Polarising vocals aside, Wild Beasts are certainly a band that should be given a chance. Not for nothing have the likes of NME and Pitchfork shouldered their hopes on the UK four-piece as indie rock’s saviours. Chiefly due to their always evocative music and bookish, highbrow lyricism that Morrissey himself would be proud of, songs whose issues include class warfare and youthful hedonism. A line from Hooting & Howling best describes the band’s lyrical temperament: “equally elegant and ugly.” The articulated, poetic lyrics regaling the brutal topics they shine their well-read light upon, whether it’s the violence of the two-part title track: “they dragged me by my ankles through the street/they passed me round them like a piece of meat;” while Still Got The Taste Dancin’ On Our Tongues demands to “love the smash and grab of our goings on.” Despite the positively out-of-time attitude that informs Wild Beasts, their music is definitely not nostalgic. The album ticks with metronomic rhythms and intriguing textures that create both moody atmosphere and ambient melancholy in equal aplomb. The two-part title track is a perfect example, using a bevy of percussion, distorted bass and choppy guitars to enchant and seduce even while it suggests a darker menace lurking beneath. But the most astonishing of Wild Beasts’ accomplishments is that the polished leap of Two Dancers comes only a year after their debut Limbo, Panto. It’s as if the group have somehow managed to compact a few years’ worth of experience into a few months, learning straight away from the amateurish mistakes of their first recorded set. The rough edges of their debut have been smoothed away with craftsman-like care and precision, and the band’s musical excesses have been reined into desirable shapes and engaging hooks. Where Limbo, Panto shaked and roared, Two Dancers shimmers and intrigues. Where that record faulters, this one excels. If you can get past their eccentricities and quirks, Wild Beasts, and Two Dancers in particular, will reward you handsomely.
Posted by Al at 10:55 PM