Yes it's that time of the year again, when people get dressed up in frightful attire and attempt to glean whatever they can from those more fortunate than themselves, that's right October 31st is Derby Day.
But it also happens to be All Hallow's Eve, so whether you're having a party, avoiding the trick or treaters or simply want to get in the mood, let AMR's Halloween playlist lend you a ghoulish hand.
I'll admit the themes are a little looser this time, with more of a musical mood than literal songs about vampires, werewolves and pumpkin-carving but hell, along with the first edition you've got a bevy of Halloween selections to choose from.


No Tricks, All Treats
The Halloween '09 Playlist 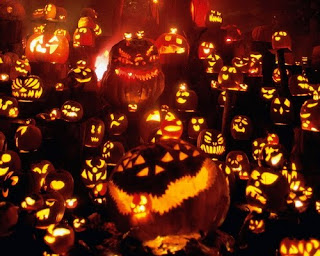 Ozzy Osbourne - Bark At The Moon
An expert when it comes to horror-themed influenced metal, the guardian of metal gives it some werewolf alliteration. It's turbo-charged guitar riffage gets the party going.

M83 - Graveyard Girl
Turning to Parisian maverick Anthony Gonzalez now to lend the list some light-hearted, heavily eighties influenced pop-rock. The lyrics are perfectly suited to any monster bash too.

Florence & The Machine - My Boy Builds Coffins
From a boy singing about a girl, we hop the gender barrier to Ms. Welch's delightful curio about her lad's macabre profession. Slightly tongue-in-cheek and cabaret all rolled into a delicious gothic pop tune.

Patrick Wolf - The Vulture
A typically narcissistic tune from the glam prince, but musically suiting considering its spooky keyboards and grinding backbeat. All that singing about 'dead meat' is perfectly Halloween-esque too.

DM Stith - Spirit Parade
Little-sung British artist who shares more than a few similarities with like-minded singer/songwriters Antony & The Johnsons, Patrick Watson and Sufjan Stevens. Here he layers his cooing harmonies into a spooky march befitting of the title.

Porcupine Tree - The Seance
No i'm not just trying to shoehorn in one of this year's best album for no reason, trust me this is fitting, perhaps the most equally beautiful and unsettling track here.

Metallica - The Thing That Should Not Be
You can always rely on Metallica come October 31st, chief among their glut of monster tunes is this sludgy cut from 1986's Master Of Puppets. A gloomy tribute to H.P. Lovecraft's Cthulu no less.

Queens Of The Stone Age - A Song For The Dead
Brutal riffage, stop-start rhythmic patterns, Mark Lanegan's throat shredding vocals and of course Mr. Grohl on the drums. What's not to like?

Rob Zombie - Dragula
Bringing us to the tail-end of the list is the cartoon-metal-rock of Rob Zombie, perhaps the first and last time that drag racing and vampires co-exist.

Ray Parker Jr. - Ghostbusters
It may be a cliche, but it's a cliche for a reason. If this doesn't get everybody singing along they've either passed out from all the candy or have gone bobbing for apples.

Rocky Horror Picture Show - Time Warp
It might be flogging a dead horse, but at Halloween there's no better time for dragging out a corpse-kicking classic like this just one more time.

Happy Halloween this saturday y'all
Posted by Al at 5:28 PM

Email ThisBlogThis!Share to TwitterShare to FacebookShare to Pinterest
Labels: playlist