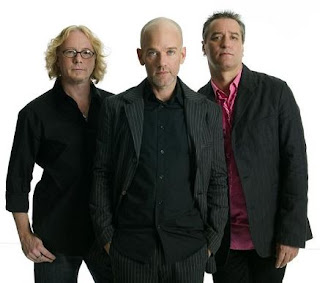 Listen close. Hear that? It’s the sound of a million montages using Everybody Hurts being constructed... with equally pun-tastic titles like Losing My R.E.M., The R.E.M. Sleeps Tonite, What’s The Frequency, R.E.M.?, How The West Was Won And Where It Got R.E.M. and so on and so on… and the less said about the Peter Buck airline 'yoghurtincident' said, the better…
All jokes aside, it’s saddening to hear that such a highly-respected group are bowing out of an industry that long needed them as a vanguard of how to ‘make it’ without compromising. Today sees one of the cornerstones of indie rock removed. When I heard the news of R.E.M.’s decision to split, I did what any self-respecting muso would do – I returned to the music. Chucking their discography on shuffle, the first cut was the opening track from 2008’s Accelerate - a personal favourite - Living Well Is The Best Revenge, it seems a fitting enough epitaph.
For R.E.M. lived well indeed, by a criteria that many envied but struggled in vain to replicate. Quickly achieving what most bands spend their entire lives striving to attain: commercial success balanced with a well-respected artistic integrity. Both of which they managed to consistently maintain over an astonishing 31 years. Each decade roughly representing three distinct phases in the band’s career.
From their sapling years in the eighties, introducing both a new breed of frontman in the enigmatic Michael Stipe and Peter Buck’s guitar style; which brought ‘jangle’ to the wider music reviewer lexicon. Theirs was a mysterious persona, inexplicable too, that they preserved their independence while achieving widespread success.
Their move to a major label was inevitable, many worrying that their signing to Warner Bros. would be  just another case of a once-important alternative act ‘selling out.’ The nineties did indeed see them becoming a household name, but R.E.M. held sway to their artistic compass and fierce sense of sovereignty, they essentially rewrote the rules of how a commercially successful band could function – paving the way (better or worse) for the likes of Radiohead, Coldplay and even U2.
The noughties however, was a difficult period. While they continued to tour frequently and release a steady output of new material, their reception and relevance was always uncertain. A struggle that could be attributed to being reduced to a trio. Following the departure of drummer Bill Berry in 1996, they were unfairly compared to a three-legged dog: functional, but severely lacking in the pace and charm they previously possessed, frequently judged by the impossible barometer of their previous work. For every review that warmly toasted to 2008’s Accelerate as a ‘return-to-form,’ there was a jaded critic who beat the band with the memory of the decidedly average Around The Sun, or worse claimed that R.E.M.’s star had long since faded.
It’s true their importance may have dwindled, it’s been a while since a young band listed Reckoning or Murmur as a key influence (the exception being that new Decemberists album), but their shine – and importance – actually burned brighter in direct contrast to the way the industry evolved around them. Towards an attitude to the quick-fix, instant gratification of the iPod generation. Their renown was earned and hard-won, and far from overnight. 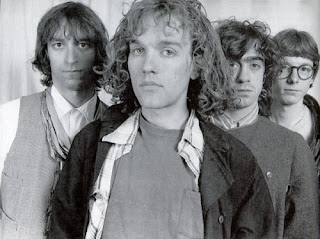 Fame was never the chief concern for the gentlemen from  Athens, Georgia. Unlike some of their contemporaries (I’m looking at you U2), they never set out to be the biggest band in the planet – (even when they were famously re-signed to Warners to the ridiculous tune of $80 million); but when the mantle was frequently bestowed upon them, they accepted it with grace and poise, and to quote Singing In The Rain without irony, with “dignity, always dignity.” In fact, it was the defining characteristic of their career. Though they were often lampooned for their serious attitudes, their veracity was never in doubt, nor did they give reason for it to be. That’s before even going into their many and varied political activism and social causes. You’d be hard-pressed to find a cringe-worthy moment in their working lives, they even attempted to rewrite the embarrassing Shiny Happy People from their history  (I always wondered what B52 Kate Pierson thought of that…).
Even the way in which they parted ways was handled with the same gentlemanly spirit they’d always conducted themselves with. In theirpersonal message from REMHQ, Mike Mills stated they still felt like “brothers who truly love, and respect, each other. We feel kind of like pioneers in this – there’s no disharmony here. No falling-outs, no lawyers squaring-off. We’ve made this decision together, amicably and with each other’s best interests at heart. The time just feels right.” No controversy, just a good-natured agreement.
It’s not such a shock then that they decided to call it a day, a question mark has been looming over their survival for the last half-decade, and like most serious artists, they were plagued by their own self-doubt as much as the inquiry of others. They’d long been doing it for the fans much more than themselves. Which is nothing short of a commendable quality in today’s musical climate. Their remarkable career is something that many of today’s acts, with more ruthless ambition than raw talent, could learn a thing or two from. That they leave these lessons tied to such a rich legacy of songcraft is our inheritance.
If you only remember them solely for karaoke renditions of Losing My Religion or Everybody Hurts or from the choruses of The Great Beyond and Imitation of Life; you’d do well to explore the riches of their extended and impressive catalogue. There’s much to discover, whether it’s the woolly secrecy of their IRS years, the heart and intelligence weaved into their stadium-sized albums Green and Automatic For The People or even  their difficult classic Up, that ‘did a Kid A’ two years before that phrase was even coined. Conversely, at their most cheerily accessible, such as 2001’s sunny Reveal, they made masterful mood and melody look easy. Even deeper investigation of their maligned work, such as 1994’s Monster or Around The Sun, reveals a confidence and aptitude that outstrips their languor. Then there’s their dalliances with hip-hop artists, KRS-One for Out of Time’s cheeky introduction Radio Song or pairing with Q-Tip on The Outsiders - well before it was considered a chic thing to do. It was just one small way in which they took risks and frequently broke new ground, at their best they were fearless innovators, unwitting trend-setters, creative pioneers in an ocean of unimaginative followers.
It’s a rare thing for anyone to escape this industry with their dignity intact, but R.E.M. did just that, and not just their pride, but their individuality. There’s no mistaking an R.E.M. song. There will never be another band like them, both in sound and action – and for that, they should be fondly remembered, if not revered.
R.I.P.R.E.M.