It has to be said: 2009 has been a great year for music, and it just keeps getting better and better.

I can't remember the last time I was inundated with such a wave of musical delights. currently i'm in the throes of working my way through a lot of new albums from the likes of Flaming Lips, Arctic Monkeys, Florence & The Machine, David Gray and Bon Iver's new musical dalliance Volcano Choir. On top of that a lot of my time has been eaten up by the twin titans of musical gaming, namely The Beatles: Rock Band and Guitar Hero 5. Which is to say, when i'm not listening to all these great artists i'm mimicking old ones on plastic instruments.

All this and I've been tackling (from week-to-week) a small pile of records for Beat magazine reviews, the latest issue of which i'm all over. There's reviews for Alberta Cross, Marmaduke Duke, album of the week on The Features and that Porcupine Tree article - so do pick yourself up a copy from your local street press outlet (it's the one with Empire Of The Sun on the cover) or check out the cool new app online that lets you flip through the issue here (to speed things up, it's pg 58 for the reviews and 48 for the PT article)

If all this takes on a slight tone of annoying complaint, it's delivered with the best of intentions. It seems like most of my waking hours are spent consuming music - and I wouldn't want it any other way. As a result though, it means i'm slighlty overwhelmed with what to actually stick to for this particular entry.

So I thought i'd post the long-overdue review of Paul Dempsey's Everything Is True, which was made Album Of The Week in last week's Beat and to which the website for Mr. Dempsey himself drew as a quote of praise on their website (this has happened before, ho ho).

I also had the pleasure of seeing Dempsey perform live @ The Corner a couple of weekends back, needless to say it was an excellent show. He performed pretty much the full album with the same excellent performance he's always given, as well as some delightfully surprising covers (namely Bruce Springsteen's Atlantic City, Television's See No Evil and Gillian Welch's Wrecking Ball). There was even time for a few Something For Kate numbers. A great show for a great album.

It's also worth noting that he was supported by the excellent Parallel Lions, the new project for Art Of Fighting's Ollie Browne, so needless to say you'll be hearing more about them on AMR in the future.
But I digress... 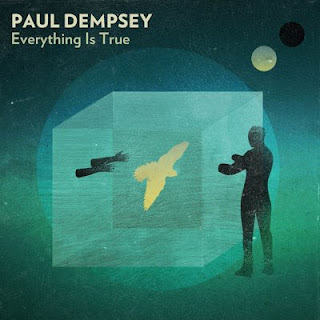 Putting Something For Kate on the back-burner to focus on a solo record may have seemed like a risky move, especially when it seemed like the Melbourne three piece were finally getting the commercial clout that equalled their exceedingly well-respected critical reputation. But then, lest we forget, it’s all due to the quality and intelligence of the songwriting – which is exactly the strengths that Paul Dempsey plays to on his first solo record, Everything Is True.
While the heady guitar rock-outs and sly pop nous of Something For Kate aren’t completely out the picture, there’s much more of a focus here on simplicity and economy, deceptive though it may be.
Even despite Dempsey’s well-catalogued struggles with writer’s block, it’s hard to conceptualise it, considering the breezy elegance of Bird In A Basement or The Great Optimist that sound like they were knocked out on the porch in the wee hours of the morning. Much of the album’s pulse rattles with an acoustic jangle and Dempsey’s delightfully raspy croon.
The heralding single Out The Airlock poised Dempsey among the Josh Pykes and Bob Evans(es) of the Aussie singer-songwriter realm with its plaintive acoustic picking and drum-less backing, but there are far more diverse things on offer on the album proper. Whether it’s Fast Friends’ dose of driving rock or the endearing melancholy of Safety In Numbness or Theme From Nice Guy.
Indeed the follow-up single, Ramona Was A Waitress, is barrel-long full of ideas; its metronomic groove and melody disguising a lyric about having a philosophical discussion with a robot. But you’d never know it from its spry delivery and infectious chorus, “I don’t need these arms anymore/I don’t need this heart now to love/I don’t need this skin and bone at all.”
It’s emblematic of Dempsey’s most powerful gift; that ability to weave brow-creasing philosophy and detailed minutiae into such brilliantly captivating harmonies and melodies without ever sounding convoluted, or heaven forbid, pretentious. Music for the head and the heart.
His wonderful way with a lyric remains undiminished, his potent imagery twisting in the most satisfying ways around the music to which they are married. The opening Bats with its images of “a swinging wire that slams shut like a guillotine/strum a note up in the wires/ to send bats down the river, seagulls around spires” or Take Me To Your Leader’s action to “unwrap the city one backstreet at a time.” The tally for genius lyrics per second is positively baffling
Even if Dempsey’s literary prowess won’t dazzle you, any number of the easy-going tracks on offer certainly will; eleven excellent reasons to acquaint yourself with one of Australia’s finest songwriters. That’s perhaps the point of Dempsey’s solo record, to appeal to those who mistook the chin-stroking intelligence of his dayjob as stroking of another kind.
Everything Is True will bring a wider audience into the artist’s fold making them see just what they’ve been missing out on and realise that, regarding his talents and abilities, Everything Is True.
Posted by Al at 11:08 PM