Just A Quickie My Dear

Hey y'all, sorry for the lack of activity here at the rant - promise i'll be on more disciplinary form soon but for the time being here's another review of an album that will be battling for album of the year status come December. 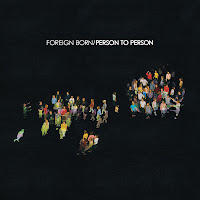 Isn’t it great when a band you’ve heard little to next to nothing of surprises you in a good way? When an album is destined to succeed off the back of its music rather than the machinations of hype and marketing? Foreign Born, and their sophomore album Person To Person, are an example of this very condition.

Forget the glut of bands, new and old, listed as influences or tools to describe them. All you need to know is that Foreign Born have already concocted their own fusion: alternative rock with sunny shades, danceable rhythms with cathartic corners and anthemic abandon.

Accompanied by a modest gallery of chamber instruments, Person To Person already finds the four-piece with a competent grasp on their group dynamic. Matt Popeiluch’s distinct vocals (reminiscent of Luke Steele when it stretches) fronting a hearty jangle, aided by multi-instrumental bandmates Lewis Pesacov, Ariel Rechtshaid and drummer Garrert Ray. Ray in particular turns in an impressive performance; one that is by turns supportive and engaging when it needs to be, and technically impressive and propulsive when it’s time to take centre-stage. A percussive, rhythmic heart that is the bedrock of the rich arrangements on offer throughout the album.

It’s a taut set too, an enjoyable forty minutes that pass like a string of career-hewn hits. From the melancholic opener Blood Oranges to the playful march of Winter Games, taking in the Afrobeat whimsy of Early Warnings and Lion’s Share. While See Us Home and Wait In This Chair sees the album out with a relaxed confidence.

Like blogosphere darlings Animal Collective, Grizzly Bear and Dirty Projectors, Foreign Born have the air of indie daring so beloved of the likes of the Pitchfork-centric crowd; but importantly, also the sunny-born charm that should ensure they don’t just remain a best-kept secret.

Person To Person is a consistently enjoyable record but as concise and well-produced as it is, the real exciting thing is that Foreign Born could be capable of even better. Or it could be that it is the benchmark that undoes them in the future, expectations which this record wasn’t saddled with and what makes it such a wonderful surprise to begin with. Oh, the irony