For Those About To Laugh... 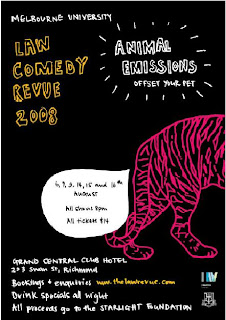 So yeah... the Law Revue, yeah it was a good time had by all and a selfish, egotistical chance for me to flex my soundtrack skills - and it seemed i did ok, cause some people have been asking what it was playing. Pretty surprising really as the majority of these songs only got 9-10 seconds airtime between sketches.

Sure i took the time to edit them so we got straight to the best bits, but still, i'm glad people noticed them as it achieved the task of distracting them from the transitions on stage. Plus i'm not sure if a lot of people picked up on it, but the music definitely contained references to the sketches they followed, or preceded. Most of these are probably impossible to pick up without the sketch running order - so i've cheekily mentioned it where appropriate.

So below is as comprehensive a list of all the music from Animal Emissions: The 2008 Melbourne University Comedy Law Revue as i could achieve. Basically the only stuff that's missing is the interval and post/pre-show music as it was random every night. Oh, and finally, as usual i've added links where available and a big thanks to the providing servers/blogs/artists. Usual rules apply.

ACT I
Opening Video - The Torch Relay
Doves - Pounding
Robert Tepper - No Easy Way Out
The Bangles - Eternal Flame
Tetris - Korobeinki (Dance Remix)
Anamanaguchi - Power Supply
(i pushed from pretty early on to have this as the opening music - and i got my wish - ain't being a director grand?)

Avril Lavigne - Sk8er Boi
(came after the Hotmail sketch which originally obliquely referenced Avril, till it was cut down to just the BOI gag - plus i liked the idea of a shitty song to throw people off the scent of the good music to come)

The Cribs - Men's Needs
(coming after the Gollum sketch and Gandalf coming out of the closet, what better way to soundtrack a homosexual reading of Lord of the Rings?)

The Features - Blow It Out

Cold War Kids - Hang Me Out To Dry

Sigur Ros - Gobbledigook
(at one point this was a contender to open the show, but instead it was better suited to come after Zork the Fruiterer - whose alien gibberish links to the title)

Kate Nash - Dickhead
(after Flex Guy, because violence against women does indeed make one a dickhead)

The Galvatrons - When We Were Kids

M.I.A. - Paper Planes
(setting the scene for the Chasing Cars party, firstly because it's such a contrast, and secondly because its quite ridiculous that the person DJ'ing would follow such a cool song with...)

Snow Patrol - Chasing Cars
(It warms my heart to think there may be a few people who will not think of Gray's Anatomy after hearing this anymore, but instead of a girl breaking down at a party)

Bloc Party - Hunting For Witches
(after the infamous Mangina sketch, i don't think anyone was paying attention to this reference, but basically Sketch Hunting - Hunting, geddit, geddit?)

The Hoosiers - Worst Case Scenario
("there's some uh... there's some shit in the butter" - see title)

Ennio Morricone - Vita Nostre
(i (half) seriously want to have this playing at my own funeral, Morricone's score to The Mission always seems to hit the right nerves - plus there's the whole South American setting)

Muse - Starlight
(I think it was in last year's show and pretty much every playlist anyone's ever made since its release. In a word, ubiquitous.)

The Flaming Lips - The Yeah Yeah Yeah Song
(For me, it just sounded a bit like the "ows" that punctuated the preceding Whack-An-Alligator sketch)

Tchaikovsky - Swan Lake excerpt
(Half of the success of the Helmetface video can be boiled down to this excellent soundtrack choice, all credit to Al Harkness, beautiful, tragic, and really, really silly)

The Beach Boys - I Get Around (Instrumental)
(aka I Get Aroused, this was EXTREMELY difficult to get a hold of... that is all)

MGMT - Kids
(this song will forever be associated with the show, and that my friends... is a very, very good thing) 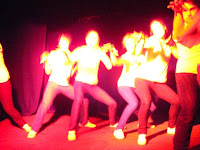 I've got a ton of ideas for posts and playlists in the future so i thought i'd just give you a little teaser of coming attractions
Coming soon to Al's Music Rant:
Songs about Jesus
Around The World In 80 Songs
The Planet/Rainbow Playlist
and i'll start winding towards my picks for the best albums and tunes of '08

Stay tuned, cause in the words of D:Ream, things can only get better.