It Was Twenty Years Ago Today...

I'm taking a slight gear shift with this post away from my themed lists (don't worry i've got some crackers planned) to turn the spotlight on some Australian music, which i haven't done for a while.

So before i begin, i'd like to say that i'm not one to fall easily for hype. I've always been a bit skeptical and dogmatic when it comes to bands hyped as 'the next big thing' or at least those that seem to send a number of simultaneous bloggers into a dizzy spell of praise and prophesying. Case in point - it was a while before i actually got into the Arctic Monkeys, and i've never looked back since. But i guess the reason for this skepticism is that fads come and go, and more often than not they fail to capture their initial promise. Just keep that in mind while i go into a dizzy spell about these guys... 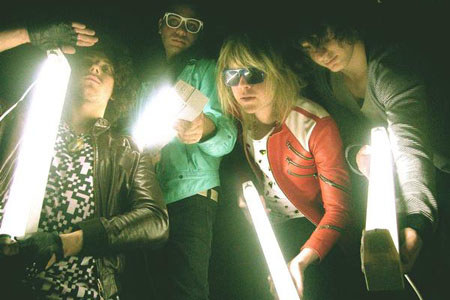 
There’s an indicative line in the breakdown of single, When We Were Kids, which goes “now I’m stuck in a town which is not enough kids to try and make a scene.” What might be mere zeitgeist banter turns out to be entirely accurate when you consider The Galvatrons hail from . Of course their thoroughly 80’s sound wouldn’t thrive in a city best known for its piers, pubs and football. Yet Johnny, Manny, Condor and Gamma - all with the uniform Ramones-style surname of Galvatron – have ascended quickly and sharply in their short existence.

Though it may belie their actual ages, the four piece sound like they’ve been raised on nought but a diet of Van Halen, Polyester Day-Glo and (cue their name) the Transformers soundtrack; the original 1986 animated movie mind, not the 2007 Blockbuster.

The title track and obvious single, When We Were Kids, may have a whiff of The Killers about it, not least in its title’s similarity to their single, When You Were Young, but it’s more to do with its nostalgic spirit. A clever two-way considering the song itself is about yearning for the past, while its sound will leave anyone raised on 80’s radio pop-rock with a big dumb grin on their face. It’s an exhilarating celebration as much as it is a guilty pleasure.

Next up She’s In Love screams out of the gates with Stan Bush (see Transformers soundtrack) guitar and pulsing synths, while Donnie’s on TV chugs along with equal abandon in a chorus celebrating small-town fame.

The 80’s fixation may be limiting, but it’s easy shorthand for the band’s style. Sure it’s the decade that seems to be all the rage musically, with countless acts from electronic to rock mimicking its fashion, song structure and of course, synths. But the Galvatrons don’t channel the 80’s, they ARE the 80’s.

Any one of these tracks would sound more comfortable alongside Belinda Carlisle and The Buggles than it does Australian contemporaries like Cut Copy, Midnight Juggernauts and The Presets. Particularly because the shiny production (mixed by Tim Palmer) sounds so Un-Australian, despite the vague detections of an Aussie twang in the vocals, this is clearly indebted to American culture. Johnny’s voice sounding stuck in a time warp between early XTC and Ric Ocasek of the Cars.

The EP also contains two needless remixes that try to re-shape and repackage the denim-rock attitude into shapes ready built for the indie dancefloor. Ultimately it’s an uneasy fit, as it’s precisely this kind of trendy scene that The Galavtrons are trying to avoid. Instead escaping into big polished production, complete with equally large drums and guitar, which the remixes then thanklessly dispense with.

When We Were Kids is perfect for the EP format, a blast delivered with much energy and radio-friendly length along with big choruses and catchy lyrics, but the question remains whether the novelty will last a whole album.

So if the below image makes you smile with warm memories i suggest you check them out....