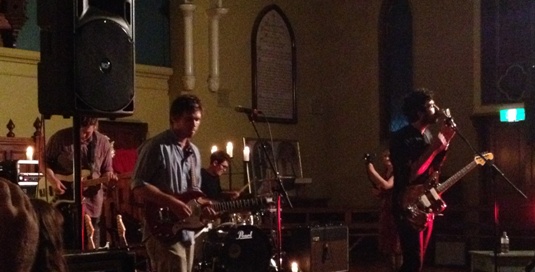 It’s not often you go to church and see a drum riser splayed across the altar. For the launch of their self-titled EP, Lowlakes chose to commandeer Northcote’s uniting church, clearing the pews aside for a makeshift gig space with naught but a few spots and a vigil of candles to light the room. The natural acoustics were a bit boomy for your typical gig, but as a unique setting it would even give AC/DC’s Let There Be Rock video pause.


Opening the bill was Melbourne up-and-coming songstress Kate Vigo, applying a stripped back approach to her usually electro-pop material. Smartly playing to the intimacy of the setting meant a greater focus on her lovely voice. Particularly her final number with minimalist backing from acoustic guitar, shaker and arresting vocal harmonies.
Similarly spartan, was local Hayden Calnin, with just his guitar, an effects bank and his impressively warm set of lungs to voice his spare hymnals. Unfortunately however, the acoustics were doing more favours for the rising chatter than Calnin’s measured hymnals, but for those paying attention, he delivered a stately set of slowly blossoming music. Constructing fragile textures and spacious guitar chords with the aid of a loop pedal on Winter, or conversely, channelling James Blake for Summer’s darker keyboard patterns. It’s a real shame then that he wasn’t getting the hushed reverence his music requires.
Following his set, the hall quickly filled with a young throng waiting cross-legged on the polished wood floor, while  further candles were lit. With a church organ and stained-glass as backdrop, it made a beautiful visual for Lowlakes brand of restrained aural beauty.
Opening with the unbroken rumble of Arctic House, the strengths of the band’s characteristics were soon brought to bear. From the understated but essential rhythm section of drummer Jack Talbot and bassist Bill Guerin to the quartet’s remarkable vocalist, Thomas Snowdon. Bedecked in a silken shirt, his voice filled the church with all of its emotive splendour. With the enigmatic curled vibrato of Antony Hegarty as well as the weeping baritone of Wild Beasts’ Tom Fleming, Snowdon’s voice is ever-floating over the band’s atmospheric music, both its driving force and its resonant entry-point.
Filling out the quartet was fellow bandmate Brenton Monaghan, providing both guitar, keys and bright vocal harmonies that act as a perfect counterpart to Snowdon’s ripe croon. Discreetly aided by unofficial fifth member, Manfred Kaindel, their sound is a colourful blur of ambient guitars, shimmering keyboards, light percussive flourishes and a metronomic rhythmic undertow.
Catch The Breeze is particularly impressive, its dense metronomic pacing hitting effectively in this intimate space while Madman provokes the audience, having sat patiently thus far, to jump up and sway along to its hypnotic pull. The biggest whoop of recognition is reserved for Buffalo, their most urgent track and clearly a set highlight. Carried by drummer Talbot’s smooth backbeat, its vocal hooks and gentle structural shifts sink deep.
An impressive take on Fever Ray’s Dry and Dusty brings out some sequenced pads and dense piano work with Snowdon’s voice reaching its cathartic upper register, prompting further waves of glacial guitar and pulsing rhythms. Along with a faithful recreation of lead single Carry The Motion, their slow, mercurial tunes are reminiscent of the eighties’ darkwave artists from 4AD’s classic shoegaze period, such as Dead Can Dance and Cocteau Twins; as much as it does the celestial soundscapes of Sigur Ros. In the live setting, along with the church’s natural dynamics, their atmospheric rock has an organic punch too.
They finish their main set with a brand new cut, Iceberg Nerve, which bookends the opening Arctic House with further glacial lyrical references as Snowdon caws “out here on the ice.” Its piercing guitar figure further reminiscent of eighties mood-makers, punctuating another bruised, shimmering swell; a steady crescendo of haunting vocals and exhaling guitars. A distorted slab of effects from Monaghan signals a tempo change and an upward shift towards some scintillating string work, arpeggiated figures cascading like metallic droplets across a powerful wave of sound that still possesses an effective atmospheric wilt.
For a band with only a singular, four-track EP to their name – it’s impressive stuff indeed, a set of competent and well-executed tunes. If there’s fault to be found, it’s that they need to carve out their own audience. Despite a full house, clearly flush with friends and family – some even milling about filming the event - there’s the constant hum of chatter from a youthful crowd more easily distracted from the contemplative temper that Lowlakes mine.
Still, if the biggest nit you can pick from a headline slot is that the crowd were mildly annoying, there’s clearly plenty in place to ensure the band’s swift success. Lowlakes have the tunes and the potential, and if tonight is anything go by, they have the presence and the professionalism to match. 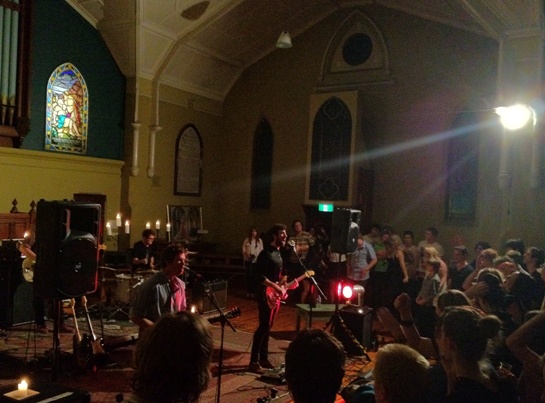