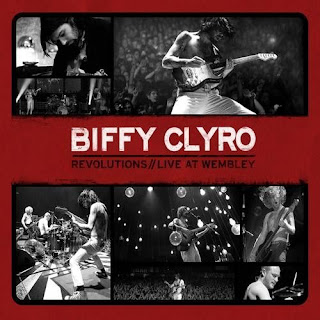 It’s easy to imagine rock titans like Foo Fighters and Muse selling out the gargantuan Wembley Stadium, but it’s a considerably impressive mark of their boon in popularity that the Scottish misfits, who were the support act for both, have achieved the same feat. Biffy Clyro have worked harder than most to fill that arena, their underdog story climaxing back when they broke out of the alt-rock ghetto with Puzzle in 2005. Having altogether shed the wiry eccentricities of their earlier material for leaner and more focussed work without obscuring their fiery energy or fans, an army of followers under the banner cry of: “mon the Biff”
Armed with an incendiary spirit and muscular tunes aplenty, they rock with the fearsome enthusiasm you’d expect from three lads born-and-bred on a diet of Nirvana and distortion pedals. Opener The Captain is custom built to shake venues’ foundations while That Golden Rule, still their most brutal track, is suitably monstrous in performance. There’s an anthemic allure to their sensitive moments too, especially the acoustic singalong of Machines and the delicate Folding Stars. While the lion’s share of the set wisely prioritises Puzzle and Only Revolutions, some older favourites make a welcome appearance. 57 and All The Way Down in particular, undergo a beefy update that perfectly slot alongside the shining rally of rousing performances, finishing with the chart-bothering Mountains with as much energy as they mustered from the beginning.
It’s a real shame then that the DVD half of the set makes for such frustrating viewing. While it conveys the sense of pomp and scale, it’s predictably shot, with lots of requisite shots of fans screaming along at the top of their lungs. There’s also an obsessive use of slow-motion to portray the band’s antics as somewhat heroic. This stylistic approach undermines the live Biffy experience and doesn’t do the sweaty appeal of three topless, bearded men hurling themselves into their every song justice. Frontman Simon Neil’s shaggy, tattooed frame and charming brogue acting as the passionate linchpin (and a charming interviewee) while the intensity of the rhythm section, powered by the brothers Johnston, ensures their vigorous execution, augmented by guitarist Mike Vennart (of the now defunct Oceansize, RIP).
Revolutions still manages to accurately document a band operating at the peak of their powers, with the perfect grasp of the key elements needed to deliver a memorably big show
Posted by Al at 4:03 AM