Well as i've mentioned, i previously signed on to FasterLouder and started writing album reviews straight away, but either for them being busy - taking a long time to process or my work not being good enough.... so i'll let you decide. 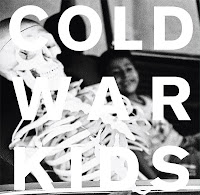 Loyalty To Loyalty’s accompanying making-of DVD, uniquely, contains interviews with the band members’ parents – who mostly surmise that the group’s debut was an experimental album to find their footing, and that in so many words that this, their second, is their ‘make or break’ album.

Why the pressure? Well Cold War Kids managed to storm the blogosphere with their idiosyncratic songs about, well, Robbers & Cowards (their debut album) which along with a captivating and energetic live show catapulted them into the limelight. That their second album should be a strengthening of their position as a leading indie band is as much a point of pride as it is of purpose.

The opening of Against Privacy addresses these issues with a kind of call-to-arms manifesto “forget ex-girlfriends/we want little governments/we tell stories/we want to get you to join in.” It’s an excellent microcosm of Cold War Kids’ original appeal, slightly political attitudes bolstered to music that’s at times experimental, sparse and surprisingly cathartic. At the same time however, it highlights some of the problems of Loyalty To Loyalty, beginning with the fact that they’ve forgotten to “tell stories” sometimes.

The narrative drive of their first album, exemplified by Passing The Hat, We Used To Vacation and Hospital Beds has only survived to album two in the form of Jumpers: a wistful look at suicide jumpers against a jaunty ragtime piano. This isn’t to say that the album should follow the same formulas of Robbers & Cowards, their sharp lyrical sense remains – even if it’s not always story driven. Such as on Dreams Old Men Dream’s informed ruminations, “thought I was laying in my garden with my hands deep in soil/but I was there on an island shooting flares at your boat/thought I was soothing like a violin confessing new rain/but I was piping like a trumpet frantic for fame.”

Musically however these anthemic aspirations don’t add up, while sometimes the sparse, rhythmic backdrops offer an intriguing juxtaposition, more often that not they leave a jarring disparity between the music and lyrics as they do on Every Man I Fall For. Still, abandon was a characteristic of their first album too, featuring Nathan Willett’s bluesy howl, the four piece’s style of unhinged indie rock always sounded like a band flirting with the edges of control, but here it seems at times as if they’ve tipped the scales. Cuts such as Avalanche In B and On The Night My Love Broke Through seem to favour avant-garde free form, in the style of Tom Waits, without the musical reward, that instantly kill any momentum tighter tracks, such as Something Is Not Right With Me or I’ve Seen Enough, have built up. 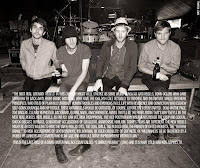 Perhaps it’s a case of quality control, while Loyalty To Loyalty is merely a track more than their debut, it seems to lose pace towards the middle and could’ve really benefited from a lean, effective set list if it had sacrificed it’s more indulgent moments.

Or perhaps it’s just a demonstration for the speed at which bands are forced to evolve in today’s industry, demonstrating as much ambition in two years’ break as older bands had to demonstrate in a decade.

Make no mistake though, when Cold War Kids still hit it, they really hit it, and they still sound quite unlike their contemporaries, but it seems that by putting so much pressure on themselves, conscious or not, they’ve lost sight of some of what made the group so special in the first place.

mp3: Against Privacy
Something Is Not Right With Me
I've Seen Enough 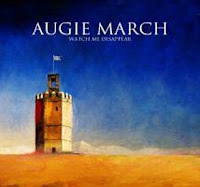 Following after their most direct and successful effort thus far, 2006’s Moo, You Bloody Choir, comes album number four Watch Me Disappear. Recorded at Neil Finn’s Roundhead studios, it finds the five-piece shouldering their popular acceptance comfortably and defying expectations precisely by not rebelling against them. Delivering a taut eleven track set, compared to the average fifteen track forebears, of similarly polished songs.

Their creeping towards mainstream acceptance was a major coup considering Augie March’s most obvious characteristic: Glenn Richards’ old-world poetry. Which had sometimes been a barrier to enjoying their rich musical joys for most and while ‘retro’ is too fashionable a term to describe it, there is something decidedly nostalgic in his literary technique, this isn’t to say however, that Augie March are trapped in the past.

The Dylanesque beauty of One Crowded Hour found Richards lamenting the loss of potential love against a backdrop of “nonsense bars with their nowhere music” armed with his tools of poetic cadence. A brilliant damaged anthem, and a nation agreed as the song captured the top spot in Triple J’s Hottest 100.

This lyrical style hasn’t dwindled a jot, who else but Augie March could turn “Out of the mouth of a black dog/out of the terrors of 3 am/out of the dark and whispering fen/I was blind then I could see/now I’m blind again” into a upbeat sing-a-long as they do on lead single Pennywhistle?

Elsewhere the album carries an undercurrent of sorrow, apathy and even murder balladry but winningly cloaked in beautifully crafted songs and crisp production. Adam Donovan’s guitars and Kiernan Box’s keyboards add a lush layer to the sound, while Edmondo Ammendola and David Williams are the perfectly balanced rhythm section to the lush harmonies and rich arrangements at work. Highlights include the cool ambience of Dogsday, a raucous bash called The Glenorchy Bunyip (how very Australian) and a spiritual successor to Bottle Baby, recorded by Richards in an apartment in Hobart, The Slant. The only misstep can be pinned on City Of ’s failed attempt to wed a driving rhythm with reverberating textures and a garbled chorus, and even then it’s an interesting experiment none the less.

As the cathartic epic The Devil In Me closes the album, the lasting impression has to be Richards’ words, returning to the mind with the excellent accompanying melodies and phrasing in tow, as rewarding as they are challenging.

While we might question, ‘what are these songs about?’ it doesn’t really matter. Augie March speak more to the ability of a dense map of words, along with music, to dazzle and mystify. It’s not about unravelling what the rustic imagery is meant to convey, but about the beauty of the object. Like the album title might suggest, disappearing behind the majesty of the words. The irony of course, is that Watch Me Disappear will only push Augie March ever higher into the ranks of the great Australian bands.

Reminds me of the good ol' days of AMR's beginnings a bit of cutting-edge indie with some homegrown rock. By the way if you're a regular reader of these humble posts, feel free to give us a shout via the comments - if you've got some suggestions for future posts or merely want to rag on me - please do.

Until we meet again...