Nothing Better Than Sax (In The 80's)

There's been something severely lacking from Chart Pop music of late, and not just talking about the quality. No i'm referring instead to a time when music was concerned not only with colourful clothing, impossible hairstyles and cheesy power chords; but also with a fascination for the Saxophone.

Oh yes, there was a time when it was the almighty Sax that would take the spotlight and blow us away (no pun intended) for a few bars - providing in most cases the apex to a song's climax. The guitar solo may have gone through a million transitions (and remain popular today) in pop and rock music, but it was in the decade of the 1980's that the sound of a blaring horn marked a pop classic. It's something i think is sorely missed in moder music, sure there may have been some great solos before (Pink Floyd's Money, Born To Run, The Logical Song) and since (anything by Dave Matthews Band) but that cheesy centrepoint of the pop song was never richer than it was between 1980-1989.

Hearing those Sax solos today is not only nostalgic, but also sound as powerful as the first time they cut through the synths and electric drums to provide some fist pumping energy. I'm not really sure how it started or when it fell out of fashion, but following is a list celebrating... 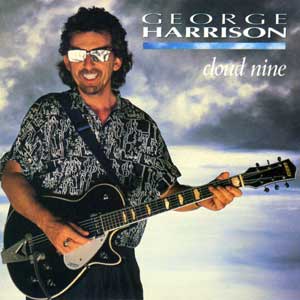 My earliest memory of any song is of George Harrison's chart hit three years after i was born. It was on a 45 7 inch vinyl single and i remember the label distinctly as it featured drawings of wild horses charging around the circumference of the record, because of the label, Dark Horse. To my infant tongue it thus became known as "The Horse Song." There's something fitting i think in knowing that the first song i can ever remembering listening to is by a Beatle, and Horse Song or no, it also contains a brilliant Saxophone solo that perfectly encircled the electro drums with its ever rising phrases and mimicking the earlier guitar solo in its melody as the song fades towards its close. It's still those brass-fuelled notes that ring in my head when i think of the nostalgic joy this song brings.

Tina Turner - Simply The Best (from Foreign Affair, 1989)
Although it didn't come to prominence till the early '90s, this is an unabashed '80s song in sound, tone and spirit. Produced by the legendary Mike Chapman, Turner's voice rides a wave of warm synths and snapping snare drum (another trademark of the decade) till it reaches the bridge and it's lyrics of "I can feel it even when i'm alone/Oh baby... don't let go," BAM! right on the key change comes the sax and the song rides its euphoric impact with a repeat of the chorus until the song's finish.

Although it has since been bastardized with a number of cheap dance remakes and mixes, none have managed to capture the spirit of the original. Perhaps precisely because they all lack the saxophone. First appearing in the opening, it makes its triumphant return during the chorus towards the song's end, following the typical verse/chorus/middle 8/chorus structure of most 80's pop songs. Spandau Ballet - Gold
(from True, 1983)
...and bucking that structure ever so slightly is the subtler solo of Spandau Ballet. Although it was the title track of this album that arguably spawned the bigger single, complete with a sax solo of its own, it's this track that is better. Cued by percussion, the sax solo opts for mystery and restraint as opposed to the scores of OTT blowing that make up this list. The accompanying video filmed in what looks like a Morrocan brothel more than made up for the lacking cheesiness (see for yourself). Technically this isn't a solo, but how could this yearning slice of unrequited romance possibly work without its swooning Tenor melody? Luckily messrs Michael and Ridgely made the wiser choice for which time will never forget. Against reverberated keyboard, Spanish-lite guitar and of course Michael's expressive vocal comes bursting forth the brass, and the way it cycles on itself means it could conceivably play forever.

Beach Boys - Kokomo
(from the Cocktail soundtrack, 1988)
After basically breaking up in a fug of drugs, bad blood and sour musicianship in the 70's, the Beach Boys returned with a contribution to the Tom Cruise vehicle, Cocktail. Albeit the group were in an amputated form, most notably sans their figurehead Brian Wilson, but that didn't stop them adopting a successful mix of their earlier surf sound harmonies and 80's music technology and style. Which included, of course, a sax solo.

Better known, obviously, as the piano man than anything else but during the decade Billy Joel underwent a reinvention that attempted to incorporate new musical styles into his more classical sound. More synths and cannier production was common among popular artists making the transition from earlier decades (Bruce Springsteen and Bob Dylan come to mind), but Joel came upon a winner when he penned this self-effacing and ironic hit. Oh did i forget to mention the great 50's style solo? Bill Medley & Jennifer Warnes - I've Had The Time Of My Life
& Eric Carmen - Hungry Eyes
(from the Dirty Dancing Soundtrack, 1987 )
At a time when the movie soundtrack tie-in was hitting its stride, here we have two great pop songs featuring sax solos on the one disc. The former is one of the most famous duets of the decade, while the latter was a permanent fixture of popular radio at the time. Though i think anyone would struggle to remember either of these artists, or indeed any of their songs, if it wasn't for their time in the sun with the Dirty Dancing soundtrack.

Australian acts were perhaps the biggest culprits when it came to perpetuating the saxophone as a lead instrument in the 80's band formation, and perhaps this is all due to Men At Work and their saxophone-driven song of 82. Predating their world-conquering "Down Under" single, this reggae-influenced cut took a very simple Sax phrase to punctuate its chorus, and an even simpler solo to round things out.

Icehouse - Electric Blue
(from Man of Colours, 1987)
The trend continues with the Sydney-born Icehouse and the song they co-wrote with John Oates (of Hall & Oates) who must have recommended the use of a Saxophone solo. It gave them their highest charting song in America and it was one of the first that came to mind when i began dreaming up this list. It's of the yearning, romantic persuasion and is a snug contrast to the chugging guitars and arena-sized drums.

Rounding out the third Australian entry is INXS and their chart-assaulting Kick album, this power ballad was a bit off the beaten path for the group's usual brand of whip-smart rock songs. Michael Hutchence's cocky demeanor is bolstered into a soothing croon here as the keyboard strings hold the rhythm against Ennio Morricone style guitars, and what better excuse for a brief, yet rousing, sax solo than another teary eyed song about love?

David Bowie - Blue Jean
(from Tonight, 1984)
It's a little known fact that Bowie cut his musical teeth on the saxophone, it was one of the first instruments he practised and made full use of throughout his career, particularly on the plastic soul of his Young Americans album. The 80's saw him continue to spotlight his early love even as squealing guitars, keyboards and double-tracked vocals began to enter the fray. The culmination of which is probably 1983's Let's Dance with its rubbery brass, but since the single edit foolishly cut it out, Bowie must be represented instead by the later single, Blue Jean. So although the Saxophone on Blue Jean isn't so much a solo as a series of short phrases and melodies that punctuate his new romantic ballad, it stands as a representative of it's writer's constant saxophone patronage (now there's a sentence i never thought i'd write).

John Farnham - You're The Voice (from Whispering Jack, 1986)
Obviously Johnny never got the memo, and provided a solo with the wrong instrument. Instead he provides possibly the greatest use of the Bagpipes in a rock song... ever. If you're a fan of this song you simply must check out its hilarious use in the movie Hot Rod

Until next time, keep the saxophone alive with this megamix mp3 i've compiled. I apologise in advance for the rough cuts and poor quality, i was using a very primitive (because its very free) audio editing program, nonetheless if you're too lazy to find these songs individually i've pared it down to the saxophone stardom.
Enjoy: 80's Sax Megamix.mp3
Posted by Al at 8:51 PM